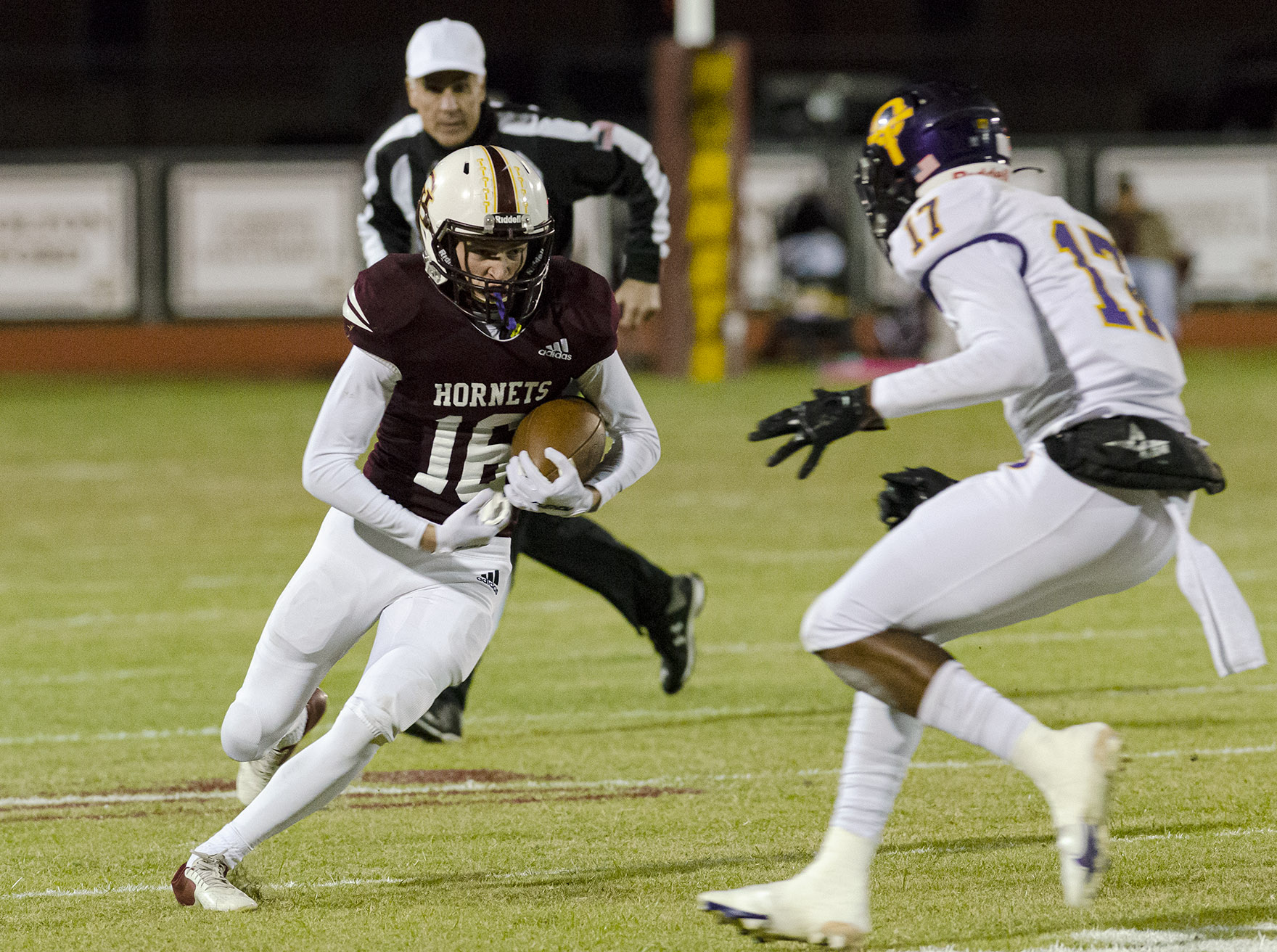 Grand Lake running back Brent Hardesty looks for a way around Oberlin’s Noah Carter during a Class 1A regional playoff game Friday. The Hornets host Haynesville this week in the quarterfinals. (Rodrick Anderson / American Press)

Historic Eagles: Rosepine will travel to defending state champion Many to make its first appearance in the quarterfinal round of the Class 2A football playoffs. The Eagles won their regional round game in dramatic fashion, with QB Ethan Frey scoring on a 2-point run to give the Eagles a 43-42 double overtime win over Red River.

Basile is Back: The lone SWLA team to win on the road in the regional round, Basile will return home to host top seed Logansport in a Class 1A quarterfinal. This will be the eighth quarterfinal appearance since 2012 for the Bearcats.

Home Sweet Home: After surviving a tough playoff opener against Oberlin, Grand Lake will host longtime state power Haynesville in search of a second straight trip to the 1A semifinals. Haynesville has 17 state titles, the most recent coming in 2014.

Thanksgiving hoops: The undefeated Barbe Bucs are the top team in the field of eight at the Sulphur Thanksgiving Classic that includes Sulphur, Oakdale, St. Louis Catholic, LaGrange, Midland, Benton and Rayne.

The Bucs will host defending District 5-2A champion Oakdale on Tuesday followed by games against Rayne and DeQuincy on Tuesday and Wednesday.

The host Tors are coming off their first win led by 6-6 freshman John David LaFleur, who had a double-double with 16 points and 12 rebounds, while senior Felipe Michelini nearly had a triple-double with eight assists, seven rebounds and eight points.

LaGrange is 2-1 led by guards Kareem Ceasar and Knyles Randall and center K’Wasi Jack, who all are averaging in double-figures. The Gators will play Oakdale on Tuesday and city rival St. Louis Catholic on Wednesday.

On the pitch: The Sulphur Tors and Leesville Wampus Cats boys soccer teams are off to hot starts. The Tors are 3-0, outscoring their opponents 15-1 led by Hayden Habetz (3 goals, 3 assists), Robert Campos (4 goals) and Tyler Moreaux (3 goals, 2 assists). Goalkeepers Eric Zuniga and Ethan Curtis have combined for 11 saves.

The Tors are looking to better their 6-0 start last season and will host rival Barbe on Tuesday at noon in a nondistrict game. The Bucs are looking for their first win over the Tors since Nov. 14, 2018.

Leesville is 3-0 and has yet to give up a goal. Leesville will play in the Pineville tournament on Friday and Saturday.

Jim Gazzolo column: Cowboys have a lot to fix…