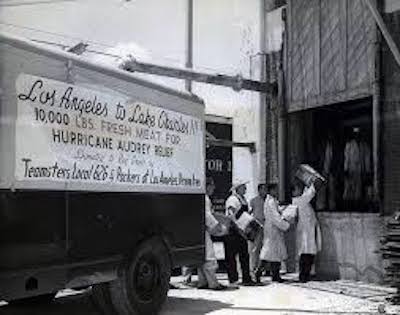 A truck load of meat from Los Angeles made its way to Cameron, La., after Hurricane Audrey in 1957. nola.com

Rebuilding the over 1,200 Cameron Parish homes that were destroyed by Hurricane Audrey on June 27, 1957, and repairing the over 22,000 that were damaged there and elsewhere was a major task after the devastating storm came ashore. However, there was a unique and perhaps historic home-building effort conceived to get the job done.

The first phase called for setting up housing for those heads of families returning to Cameron to help with the general clean-up of hurricane debris.

The Grand Chenier school, the second floor of the Masonic Temple building in Cameron and the Cameron hotel in Creole, were used for shelters. The Red Cross was in charge of the shelters and took care of the feeding of workers.

The newspaper added, “The work of rebuilding Cameron is in full swing, but a large cabin cruiser grounded in a field, a dead cow hanging on a fence, the shambles of a house standing a mile from its foundation, indicate that the job has just begun.”

Once the temporary projects were completed, members of organized labor began rebuilding homes of needy hurricane victims. Full crews of union workers did the construction work on a weekend volunteer basis with their housing, food and transportation provided by the unions.

Organized labor underwrote the cost of bringing the volunteer army of tradesmen in planes and chartered buses to Lake Charles from all parts of the state. Labor fed and housed the workers and returned them to their homes in time for their regular jobs.

One union official said the project at its peak would involve the mass movement into Cameron of as many as 1,500 union tradesmen on any given weekend.

Red Cross coordinators worked with the union leaders to ascertain the number of units needed as well as the types and quantities of materials needed. The Red Cross provided the materials.

The American Press reported that on Aug. 2 over 148 union workers from New Orleans, Baton Rouge, Shreveport and Alexandria would descend on Cameron Parish towns to begin an unprecedented mass rebuilding program.

Four building crews of 37 AFL-CIO members each began work at 8:30 a.m. Saturday on five homes and they were all completed by Sunday night with the families ready to move in. The crews found the Red Cross-furnished materials and tools waiting at each site.

Union and Red Cross officials said additional homes would be completed during coming weekends. Lake Charles union members served as guides, foremen and crew leaders in getting the construction completed.

The Federal Rural Electrical Administration approved a $480,000 loan for the Cameron Telephone Co. to restore telephone facilities. The Small Business Administration was also making loans. Fifteen were approved totaling over $184,000 and there were other applications on file seeking over $338,000.

Unlike Southwest Louisiana insurance struggles after Hurricanes Laura and Delta in 2020, settlements went much smoother in 1957. Rufus D. Hayes, state insurance commissioner at the time, told The Associated Press 90 percent of Hurricane Audrey insurance claims would be closed out by Sept. 1, 1957.

Hayes spent two days in New York City to help break a clerical bottleneck and to get the General Adjustment Bureau to increase adjusting staffs.

In the 30 days after Hurricane Audrey hit, Hayes said 49,342 claims had been filed and 24,158 were closed out, requiring nearly $7 million. He said the insurance companies wanted to work as fast as possible because of the extra expense in maintaining a large field force of 356 adjusters.

Although the restoration was going well by September of 1957, there was still much more to be done. Cameron made it back from Hurricane Audrey without FEMA, but there were more hurricanes to come in its future.

Scooter Hobbs column: It’s no game of the century