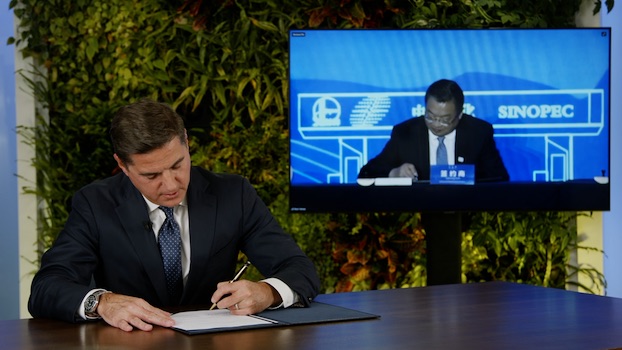 Sable also spoke of the ongoing global discussion on ways to lower the carbon footprint, including the United Nations Climate Change Conference in Glasgow, Scotland. He said there’s no silver bullet to energy transition, but he said liquefied natural gas will certainly play a role.

“One thing is clear: the global climate effort will not be successful without the continued and expanded deployment of natural gas,” Sabel said.

Sable said Venture Global is eager to share in the environmental progress, similar to the shale revolution that allowed the transition from coal to natural gas and dramatically reduced carbon dioxide emissions.

“Through the expanded deployment of clean LNG, we will equip our customers from Europe to Asia with the resources and opportunity to lower their emissions, while also providing energy security, reliability and affordability to their citizens,” he said.

Sable said analysts anticipate up to a 50 percent increase in the demand for clean LNG by 2050.

“It will be a critical partner in the buildout of renewable energy as the world moves away from coal,” he said.

Venture Global has committed to carbon capture and sequestration for all its facilities, with the plan to sequester 1 million tons of carbon annually, Sabel said.

Venture Global’s $4.5 billion Calcasieu Pass LNG export facility is being built on a 1,000-acre site at the intersection of the Calcasieu Ship Channel and the Gulf of Mexico. Commercial operations are slated to begin in the fall of 2022, with the facility producing 10 million tons of LNG per year.