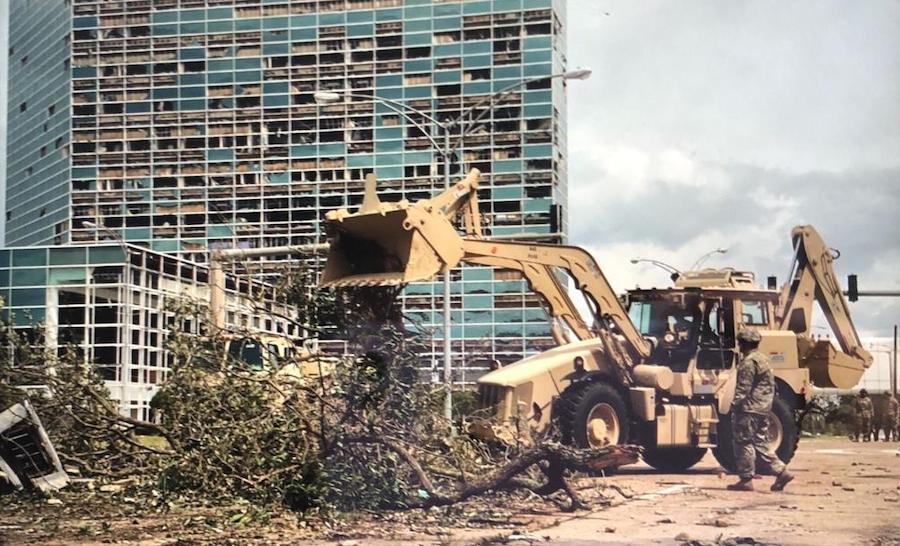 Brian Abshire, Calcasieu Parish Police Jury president, said Wednesday that it took Hurricane Ida’s August landfall in Southeast Louisiana for the Southwest corner of the state to get attention on the national level.

“I feel like Calcasieu Parish is the redheaded stepchild of the state,” he said.

Lake Charles Mayor Nic Hunter said the amount of federal Community Development Block Grant funding wasn’t a surprise. Of the $5 billion Congress set aside for long-term disaster recovery, $1.6 billion was dedicated for disasters that occurred throughout the U.S. in 2020.

“I don’t have any new emotions today that I had weeks ago,” Hunter said. “I made my feelings felt on how it measures up to other awards and how inequitable it is.”

Hunter said the money will provide some help to residents still struggling to return to their hurricane-battered homes or having trouble finding affordable rental space.

“There’s no doubt it will help reestablish residents in sustainable housing,” he said.

With Congress having to approve another spending plan before Dec. 3, it leaves the option open for Southwest Louisiana to get additional hurricane recovery funding. Abshire said another bite at the apple doesn’t look promising. The Police Jury passed a resolution Oct. 21, asking the federal government to allocate $5 billion in supplemental aid for the 2020 disasters.

“I’m hopeful our recovery is still moving forward, and these (CDBG) dollars will help us to continue to move the mark,” he said. “I have no faith in the Biden administration that they will come with additional dollars in the future, given the amount of time we’ve sat waiting for what we’re getting.”

Abshire also criticized U.S. Rep. Clay Higgins, R-Port Barre, for his lack of focus on helping with recovery from Hurricanes Laura and Delta.

“You can look at his priorities, and Southwest Louisiana is third or fourth on his list,” he said. “I don’t understand why, but it is what it is. All we can do is beg, and we’ve done plenty of that.”

“The city, parish and state have bombarded government officials with data that supports the unmet needs,” Hunter said. “You don’t need a mayor to tell you whether this is an inequitable award or not.”

Despite the funding not being enough to meet Southwest Louisiana’s long-term recovery needs, Hunter remains optimistic that the region will bounce back eventually. He said officials will have to find creative ways to help locals without raising taxes.

“I don’t think there’s any scenario where Lake Charles doesn’t recover,” he said. “It’s probably going to be a little longer and more cumbersome than it needs to be, and it pains me to say that. The good news is the caliber of people in Southwest Louisiana and their character and resiliency is so strong.”