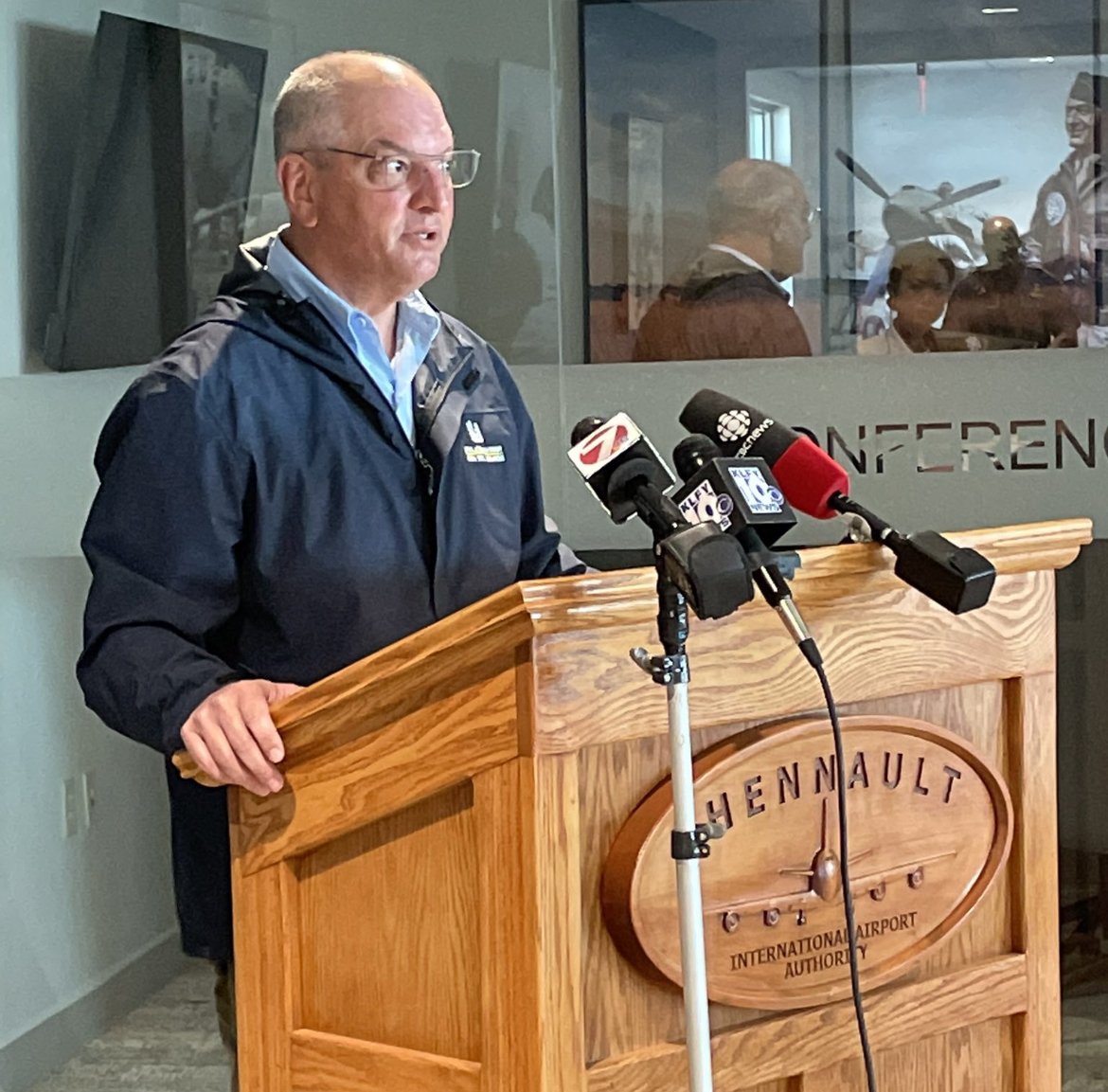 Gov. John Bel Edwards, after Thursday’s tour of neighborhoods just south of Lake Charles that were damaged by an EF2 tornado that touched down Wednesday, said the frequency of severe weather here and nationwide is proof that climate change is real and needs to be addressed.

During a press conference at Chennault International Airport, Edwards said the tornado touched down at 12:20 p.m. just off Ham Reid Road, with wind speeds topping at 130 miles per hour and a path that was 2.2 miles long and 300 yards wide. No deaths were reported from the tornado, but there were two reported injuries, including one woman who was hurt after a window blew into her home and another person whose leg was lacerated by flying debris.

Roughly a dozen homes in the tornado’s path suffered significant damage, Edwards said. Strong winds were also reported in Beauregard and Cameron parishes, along with other potential tornadoes, he said.

Wednesday’s tornado is another severe weather event in a long line of disasters Calcasieu Parish has endured over the past year. The Category 4 Hurricane Laura made landfall in August 2020, followed by the Category 2 Hurricane Delta in October. A winter storm in February caused burst pipes at homes and businesses, and record-breaking rainfall in May caused widespread flooding in the Lake Charles area.

“I mean, seriously, enough is enough,” Edwards said of Wednesday’s tornado. “The people are resilient and very generous and hardworking, faithful people, but that’s enough to test anybody. They didn’t need this.”

Given the scope of damage, the governor said a major disaster declaration is not likely. However, residents who were impacted should report damages at damage.la.gov. He added that residents whose homes were damaged should contact their insurance provider and file a claim.

The governor later headed to Scotland to attend the 26th United Nations Climate Change Conference. He said he wants to promote Louisiana as a place that companies can invest in cleaner energy, like solar, wind and hydrogen.

Edwards spoke on the various liquefied natural gas projects in Southwest Louisiana, saying they have a large role to play in improving the climate. He said the need for oil and gas during and after the transition into cleaner energy will remain, and the Gulf of Mexico is the best place to get it. However, Louisiana “cannot afford to be more pro oil and gas than the oil and gas companies,” he said.

“We don’t want to get 10, 20 years down the road and it’s a dead end street because we chose not to diversify,” he said.

The nearly $600 million in Community Development Block Grant money allocated for Southwest Louisiana to spend on 2020 hurricane recovery is a good start, but it falls short of solving the remaining unmet needs, the biggest being housing, Edwards said. The governor visited the White House last week and delivered a copy of a letter to federal officials that presses them for more disaster relief. He said he is optimistic that more money will come to Louisiana in early December, when Congress has to approve another spending plan.

“I believe we have a great case to make, and it’s hard for me to believe that it’s going to fall on deaf ears,” Edwards said. “So, I think we will be successful, I’ll be extremely disappointed if we’re not.”

Edwards said the poor are often the most impacted by natural disasters and the least likely to recover. He said those with the largest post-disaster needs will receive assistance first.