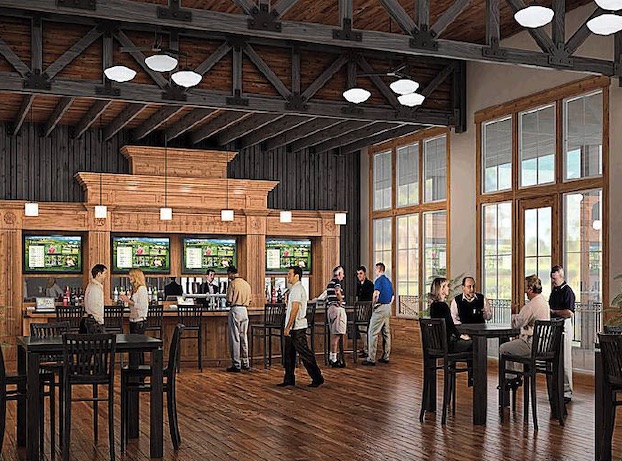 The name chosen for The National restaurant is The Max, after Coach Frank “Max” Caldarera. Caldarera was head football coach at Westlake High School from 1977 to 2011 and was known as a great cook. (Special to the American Press)

The opening of the new clubhouse at The National Golf Club of Louisiana has been delayed.

At last month’s city council meeting, architect Barry King and National general manager Gerry Pocket announced the new clubhouse would be complete around the second week of November, but that’s not going to happen.

“The delay is mainly due to equipment and supply delivery problems,” Pocket told the Westlake City Council. “After everything is received and in place, we’ll need to have a two-week training program.”

Pocket is interviewing staff and has the executive chef in place.

King said he’s hopeful the electronic communications system and kitchen hoods will be in place if all goes as planned.

One shipment went to St. Louis instead of the Westlake address then back to Mississippi again, holding up installation.

The good news is, according to City Financial Director Jerry Milner, the money is in place to completely pay off the note for the clubhouse once the project is complete.

Also at the meeting, new shelter-in-place sirens were annouced and a tour of the new fire truck highlighted.

Westlake Fire Chief Jonathan Duff met with the Office of Emergency Preparedness and found out about FEMA money to replace shelter-in-place sirens. Westlake had three that were destroyed by Hurricane Laura. The new sirens project differently, so OEP and Duff are looking for new locations that will broadcast to the same area.

Council members and meeting attendees got a close look at the new $546,000 engine and ladder tanker produced by Ferrara Fire Apparatus in Holden, La.

“A lot of the design you see is because fire fighters designed it,” Duff said.

He pointed out the Jaws of Life, windshield cutter, the 6½-foot LED lights, positive pressure fan, power saws and other bells and whistles.

“We don’t have them yet, but soon we’ll have DeWalt equipment and DeWalt batteries that are interchangeable with all the equipment,” Duff said. “This tank holds 1,000 gallons of water.

“It doesn’t take long to go through it, but it generally lasts long enough for us to get a second crew in there.”

The truck is numbered 217, a nod to the first new fire truck, No. 17, purchased by the City of Westlake in the 1960s, according to Duff. The number two satisfies a numbering system now in place for emergency vehicles and indicates the vehicle is an engine truck.

Council members approved resolutions authorizing the city to enter into an agreement with Meyer and Associates for water and sanitation improvements. Byron Racca, Meyer & Associates, updated the council on the application process.

“October is busy,” Racca said. On Oct. 31, capital outlay applications are due. We’ll resubmit the applications we submitted last year because those projects weren’t fully funded.

He told about the state’s new water system program.

“The state of Louisiana received American Rescue Plan funds, as municipalities did,” he said. They took a portion of their funds and put $300 million in what they the Louisiana Water Sector Commission and the commission is representative of several delegates throughout the state. They also incorporated representatives from Department of Health and Hospitals, Department of Environmental Quality and Community Development Block Grant into the review process of the applications.”

The John Stine road improvements to Myrtle Springs Road that includes new drainage, sidewalks and paving will not be completed until March. Calcasieu Parish will pick up the tab at Foster Street.