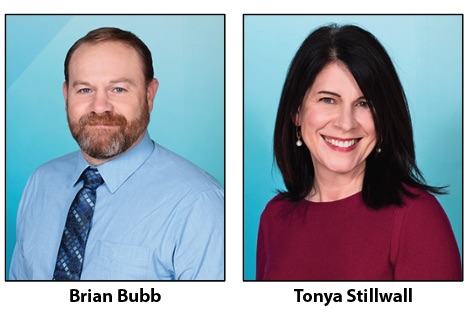 Brian Bubb has been named director of biomedical services. In his new role, Bubb will direct, coordinate and oversee all functions related to safety testing, repair and maintenance of biomedical patient care equipment. He will also provide training and technical leadership to appropriate patient care personnel regarding equipment operations, standards and maintenance.

Bubb began his biomedical engineering career in the U.S. Army serving in various roles until he retired in 2013. Upon his retirement from the Army, Bubb has pursued opportunities within the hospital biomedical sector and brings over 16 years of biomedical experience to this role.

Tonya Stillwell, PT, has been promoted to director of physical medicine. Stillwell joined WCCH in 1996.

During her employment, she has served as clinical instructor for the PT/PTA students, participated in process improvement initiatives centered around patient care outcomes and was named Employee of the Year in 2009.

In her new role, Stillwell will be responsible for the direct oversight and management for all inpatient/outpatient physical therapy, occupational therapy, speech therapy, and Genesis Therapeutic Riding Center services.

Stillwell brings more than 25 years of experience to her role. She is a graduate of Louisiana State University’s School of Allied Health Professions.

Locals inducted into Hall of Fame

POLLOCK — The Louisiana 4-H Hall of Fame welcomed 24 new members to its ranks during a recent ceremony. Among them were Charnel Bailey of Vernon Parish and Paul Jackson of Calcasieu Parish.

The Hall of Fame has inducted 256 members since it started in 2008.

As a member of the Vernon Parish 4-H Livestock club, Bailey made recommendations for the fair and 4-H show, planned fundraisers and activities, enlisted donors, obtained show pens, helped youth select calves and goats for the show, and worked with youth to help provide grooming and showing techniques for his parish and across the state. He helped assist and conduct the annual Livestock Expo.

Jackson was a key person in getting camp to offer the Hunter Safety Program and ensured LDWF certified instructors were present and supplies were stocked for camp sessions. In 1988 he was one of the “Marsh Maneuvers Dream Team.”

The LA Wildlife Federation presented him with the Conservation Educator Award in 1985. Epsilon Sigma Pi Extension Fraternity presented Jackson with the state Friend of Extension award in 1993 for his efforts developing and maintaining the Marsh Maneuvers program.

In 1998, the LA Science Teachers Association bestowed on him the State’s Distinguished Informal Science Education Award.

Upon his retirement in 2000, the U.S. Fish and Wildlife Service recognized his long-term accomplishments and impacts as Louisiana’s Aquatic Resources Education Coordinator.

From 1968 to 1971, Fitzmorris served in the Legislative Branch of the Military Affairs Division, Office of the Judge Advocate General of the Army, Department of the Army, followed by Chief of the Legal Assistance Office at Fort Polk.

From 1972 to 1973, he worked in private practice before serving as section assistant at the Office of the District Attorney in Orleans Parish from 1973 to 1978. He was a senior attorney at Texaco in the New Orleans Division from 1978 to 1998 before returning to private practice from 1998 to 2005. In 2005, he joined the Office of the District Attorney in Jefferson Parish, where he served in the Juvenile/Nonsupport Division until 2015. He served as chairman of the New Orleans Panel of the Louisiana Attorney Disciplinary Board from 1990 to 1996 and was an adjunct instructor of Religious Studies at Tulane University’s University College, currently the School of Professional Advancement, from 2006 to 2018.

The Judiciary Commission of Louisiana is a nine-member constitutionally created body empowered to review allegations of judicial misconduct and to recommend to the Supreme Court that a judge be sanctioned when misconduct is proven by clear and convincing evidence.