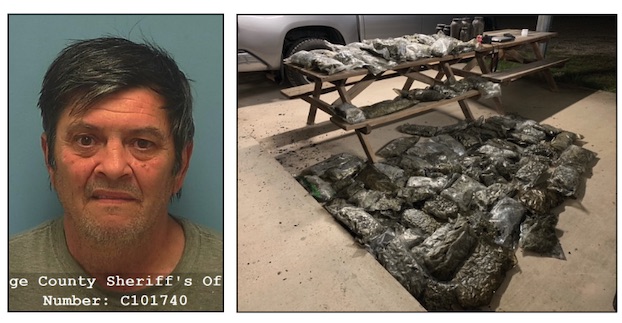 A handgun that was reported stolen in Lake Charles was discovered over the weekend during a house fire in Vidor, Texas.

Orange County Sheriff’s Office Det. Lt. Hugh S. Wilkinson said after the fire at 295 Easy Street in Vidor was distinguished on Saturday, several vacuum-sealed bags of marijuana, in plain view, were discovered on the floor and in a closet.

In total, 75 pounds of marijuana, a 7.62x51mm semi-automatic rifle, a Glock 19 and a stolen 9mm handgun reported out of Lake Charles were discovered.

Wilkinson said Douglas Wayne Claybrook, 62, who had been living in the home for less than three months, was arrested on multiple drug possession charges.

Man arrested a 21st time — this time for…