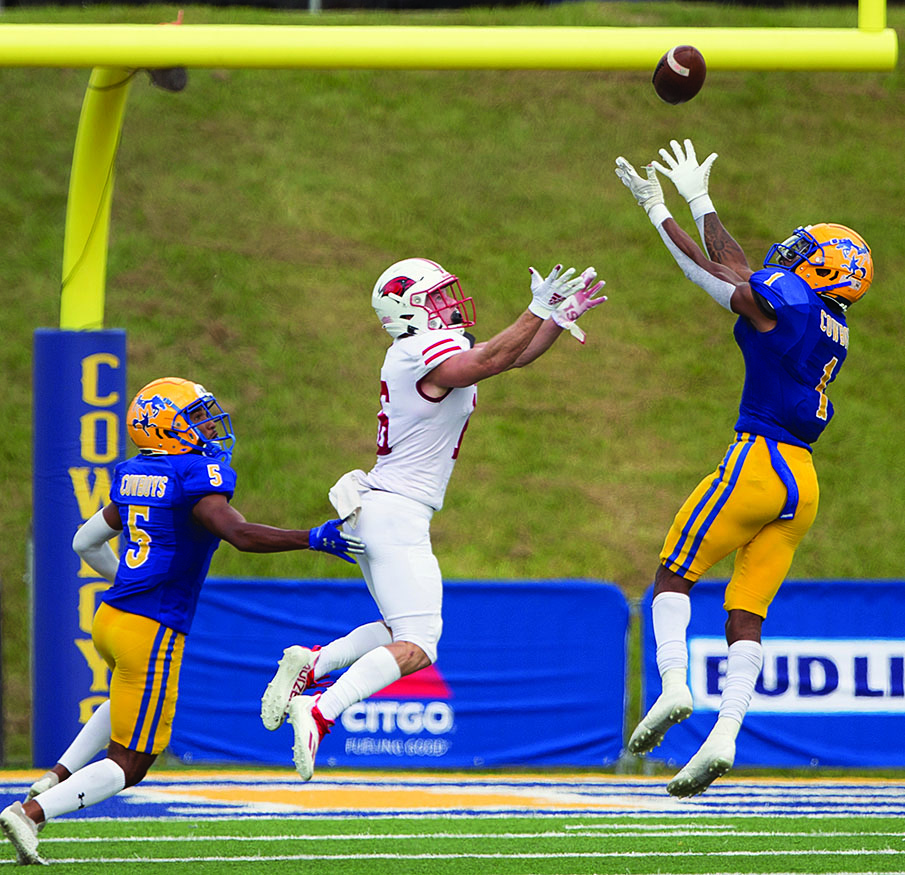 McNeese State defensive back Colby Richardson, right, intercepts the pass intended for Incarnate Word receiver Taylor Grimes Saturday at Cowboy Stadium. It was one of three interceptions for the Cowboys. (Kirk Meche / Special to the American Press)

Frank Wilson’s era at McNeese State has been more crisis management than football.

He has had to find a way to keep the program alive rather than strive.

Then there was the backdrop of an athletic department looking for a new conference to call home, all while seeing its football team, Wilson’s football team, struggle against power clubs.

Hard to look to the future when the present is looking so good.

This was especially true when you consider games against Incarnate Word. The once laughing stock whom Cowboy fans used to joke about was snickering when hearing McNeese wanted to move up.

“Move up? They can’t beat us,” Incarnate Word fans could be heard saying through their laughter.

You can’t become the bully of a league when you get bullied by one team.

Last Saturday, before a homecoming crowd that was unsure of what the outcome would be, the Cowboys showed they can also play the bully.

In what is easily the biggest win in the Wilson era, and maybe the most important considering all that’s swirling around McNeese right now, the Pokes put a physical thumping on UIW.

The 28-20 final score didn’t tell the entire story. What was seen by those inside Cowboy Stadium was a team that had said enough when it came to playing the victim, enough about the rumors of the any move and enough about Incarnate Word.

Instead, they simply wanted to make somebody pay. No better team to take out their anger against then UIW, the club that added insult to defeat by throwing for a late touchdown in a blowout game last February.

“We owed them one,” is how McNeese quarterback Cody Orgeron put it.

But there is also backroom politics taking place in this game.

Both McNeese and Incarnate Word are thinking of finding their own ejection button when it comes to the Southland Conference. Both have talked to the Western Athletic Conference and made pitches.

The Cowboys have also talked to Football Bowl Subdivision leagues. One would guess UIW is doing the same.

So it helps that the Cowboys’ game against the Cardinals drew roughly 6,000 more fans then the one in San Antonio, Texas, a month earlier. It also helps that their program is older and their stadium larger.

But what really helps, what can make university officials puff out their chests when they enter the next conference to make their pitch, is winning on the field.

Doing so with the tougher defense and after they have had their nose rubbed in it by the Cardinals recently doesn’t hurt either.

The Cowboys didn’t make a statement as much as they fulfilled their promise Saturday afternoon.

The team had come into the year with a lot of hype, talking of reclaiming its place back above the Southland Conference. That is still possible, but a lot would have to go right.

McNeese is 2-2 in the Southland with four games remaining. They play No. 9 Southeastern next week, another must win and one that also comes against a team that has beaten them twice in the calendar year already.

So with a 3-4 record overall against very good competition, McNeese still has work to do, which means they the Cowboys also have more opportunities to live up to the hype.

You could tell by the celebration coming from the McNeese locker room after the win Saturday just how much this game meant to the team. Walking through the crowd right after the final play you found out what it meant to the fans.

This was no ordinary victory. This was personal for everyone involved.

Where it leads on the field nobody knows. What it means for the future of the program is also unknown.

What it means for Wilson is obvious. It means he is that much closer to turning things around.

He can put the talk of hurricanes, academic suspension and other issues that overshadowed his team’s play on the field behind them.

It was 60 minutes of play strictly about football.

And that is just was Wilson was brought here to fix. Winning more games like this will fix everything else.