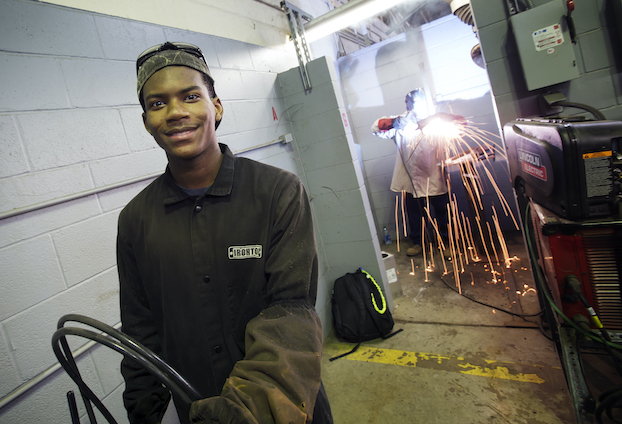 Demarcus Thomas, a deaf student at Sowela Technical Community College, is determined to reach his career goals as a welder. (Special to the American Press)

While the nation recognizes National Disability Employment Awareness Month each October, Sowela Technical Community College focuses on the preparation and long-term success of all of its students with disabilities year round.

Demarcus Thomas, a deaf student at the college, said he is determined to reach his career goals as a welder — and Sowela is equally committed to his goal.

Thomas is in his third semester and about a third of the way through the welding program. He has two interpreters to help him navigate the coursework but the effort and direction of his studies are all his own.

“When he looked around, he didn’t really like the other options that he visited. So, he came here (Sowela) excited,” Zoe Domingue, Thomas’ interpreter, said.

Karen Thomas, Demarcus’ mother, said her son wasn’t born deaf but rather lost his hearing as a result of spinal meningitis when he was six months old. “We were going to make it work,” she said, describing her initial feelings at the diagnosis.

Upon arriving home, Karen signed up for in-home sign language lessons for the family.

“I didn’t want to push him so much but he couldn’t communicate when he came back home. I got tired of my child pointing, though, and a month and a half later, Demarcus was at 50 words.”

Karen said people assume she puts high expectations on Demarcus, but on the contrary she said she’s always followed his lead.

“Whatever Demarcus wanted to do, he did it.”

The one thing Karen said she always did was ensure Demarcus was treated the same as other children.

“We all learned (sign language) and we all joke together. We treat him the same. He went to church and everybody didn’t even know he was deaf because he’d be doing all the things everybody else would be doing,” she said.

When it came time for college, Demarcus said continuing with welding was a natural fit because he began studying it in high school. Ultimately, though, he said he just “wants to work, sometimes,” laughing with a huge grin.

“Work, try to work out in the world and weld.”

At the joke Karen chimed in, “Because you can’t stay at my house forever!”

Preparing Demarcus for his career is a “huge team effort all day,” Jonathan Darbonne, welding instructor, said. Before even beginning to teach Demarcus, Darbonne and the interpreters must create a plan of action.

“The practice is still the same but the biggest difference is that we have to really get the interpreter to understand the vernacular, the verbiage and the explanations first. And they need to fully understand it before interpreting to the student,” Darbonne said.

This requires the interpreters to study the textbooks and even put on the welding hoods to get a close up look at Demarcus’ work.

The effort is well worth it, though, and progress is evident, Darbonne added. “It’s been leaps and bounds, really. We’ve almost had to come up with our own individual signs to help explain certain aspects of the welding. It’s just thinking outside of the box and coming together as a group for Demarcus.”

Because of the college’s close ties with local industry, Darbonne already has a good idea of what will be a good fit for Demarcus once he completes the program. “Maybe it’s just my hopes for him, but I think a fabrication shop is really going to be the best place for him to nest and grow.”

Darbonne’s regular meetings with industry representatives also mean he can “start putting out feelers” for Demarcus as he gets closer and closer to program completion, he said.

Beyond the classwork, Demarcus said he is enjoying campus life at Sowela. “He is the deaf one, but he has made friends and we all help each other out,” Domingue said.

Like many college students, he’s even learning to juggle his studies and work.

“He said, ‘I need a job.’ and asked me to help him fill out an application,” Karen said.

Demarcus works at the pool at L’Auberge Casino Resort.

“They asked if he wanted to move around or try any other areas, but he said he’s very happy at the pool,” Karen said.

Demarcus said he draws his inspiration to succeed from the people around him, Domingue said. “He just got motivated chatting with his family and friends. ‘I interact with a lot of deaf people and they’re really motivating.’ ”

Beyond the external motivation, Demarcus said he’s really pushing forward for the future he dreams. “A house and children and to teach his children sign language so they’re able to communicate with him.”