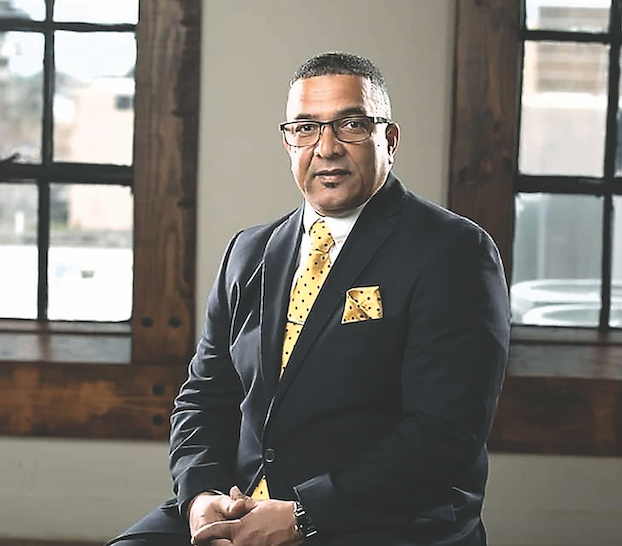 “Everything is not black and white; it’s more gray,” said Lake Charles City Councilman Craig Marks. “If you can’t navigate through that gray, people will get mad at you. You have to be a person of your word, and I do my best to stand on my word.”

Lake Charles native Craig Marks said he considers himself blessed to serve as a city councilman for District F, especially after enduring past hardships.

Marks, 54, is serving his first term on the council after defeating incumbent Johnnie Thibodeaux in the March 20 election.

“I consider that a big honor for the people to trust me that much,” he said.

Marks graduated from Lake Charles-Boston High School in 1985 and later attended the University of Louisiana at Lafayette and McNeese State University. He left college with one year left before graduating to work for Firestone Polymers.

Growing up, Marks said he and his cousin, Troy, were as close as brothers, but they took vastly different life paths. Marks, who had no prior criminal background, was arrested in 1997 in connection with the drug trafficking ring known as Aces Split.

When the trial began, Marks said he would not testify against Troy, considered the organization’s kingpin, because there weren’t any instances where he had witnessed any illegal drug activity. Troy was eventually convicted on several charges and sentenced to life in prison. He later won his case on appeal and was released in 2017.

A federal court in 1999 convicted Marks of conspiracy with intent to distribute. He was sentenced to 10 years in prison, serving just shy of nine. At the time of the sentencing, he was married with two children, ages 3 and 5.

“It was just something God had me go through,” he said.

Looking back, he said he would stand on the same principles that he did during the trial.

“It makes me bitter against the system to a certain extent, but I know we need the system,” he said. “I went to the trial believing in right and wrong. I thought a jury of my peers would see that I didn’t do anything wrong because of the evidence.”

After his release from prison, Marks spent six months in a halfway home, followed by one year of probation. Any initial concerns he had about landing a job were unfounded. He spent a year working in construction, then got a job as an operator at PPG. About a year later, he was hired as a supervisor for Alcoa Primary Metals, where he has worked for the last 15 years.

Marks resumed his role as a community advocate after leaving prison. He started the Lake Charles Chiefs, a youth sports organization, in 2009 that lasted for roughly five years.

He eventually decided to run for the District F City Council seat in March 2017, which Thibodeaux won. Marks attributed his election win this year to his activity within the community over the last 10 to 15 years.

Marks said he wants to be a voice for the people within his district. Certain goals, like removing blighted properties, can be an even bigger challenge because the city continues to grapple with hurricane recovery, he said.

“It’s kind of like a sticky situation coming into office at this time,” he said.

Marks, who lives in the Oak Park neighborhood, said he is fighting for a resurgence in the mid-city area and working to attract residents to return.

“You can’t have a city that’s top-heavy or bottom-low,” he said. “It seems like a lot of people have forgotten about Oak Park. We have to make other parts of the city catch up.”

Marks said he better understands the challenges of being an elected official. Policies have to fit within the city’s budget and follow certain laws.

“Everything is not black and whilte; it’s more gray,” he said. “If you can’t navigate through that gray, people will get mad at you. You have to be a person of your word, and I do my best to stand on my word.”

Marks said he rode out Hurricane Laura at Greater St. Mary Missionary Baptist Church, where he attends, because it was a more stable location than his home. The morning after the storm, it took him an hour navigating through debris to get to his home on 23rd Street.

“It was like watching a movie and seeing that everything had been blown up,” Marks said.

More than a year after Hurricanes Laura and Delta, Marks said he is encouraged by how much recovery has happened so far in Lake Charles.

“I know people say we have a lot left to do,” he said. “That’s true, but considering what we’ve been through, the city could be a lot worse.”

Even with the difficulties Marks endured over the years, he said his heart and soul remains rooted in Lake Charles.

“I’ve never wanted to live anywhere else,” he said. “With the disasters we’ve faced, it makes you wonder how much more we can take. We have to regroup and realize this is part of it, and we’ll come out stronger on the other side.”