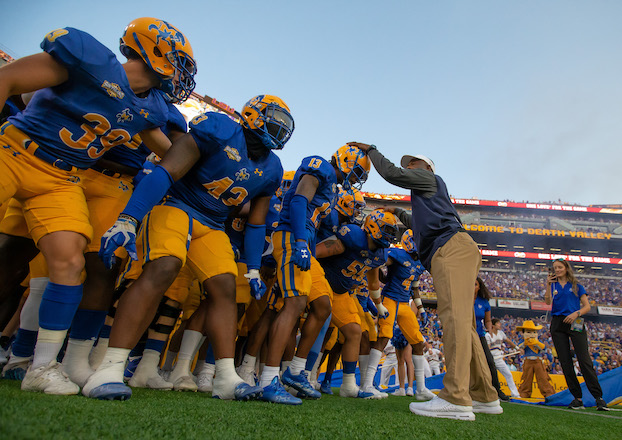 One league’s realignment could be McNeese State’s opportunity.

As Conference USA appears on the verge of losing perhaps as many as eight teams, the league is likely left searching for others to fill those holes.

Commissioner Judy MacLeod, Heath Schroyer is calling on line one.

While MacLeod’s C-USA wasn’t in the plans of the McNeese Athletic Director originally, it would not be a shock to find out he has at least dipped his toes in that pool.

Schroyer seems to have more balls in the air than a juggler under the big tent these days. He says he wants to make sure the Cowboys are in the game when it comes to this realignment musical chairs that is taking place.

“I’m not sitting here status quo as everything is happening around us,” Schroyer said. “I am actively having conversations with other athletic directors and officials from across the nation. I’m trying to sell Southwest Louisiana as a place to be and grow.”

However, he also has to worry about being left without a seat when the music stops.

Already McNeese, along with Southland Conference rival and Saturday foe Incarnate Word, has made a pitch to the Western Athletic Conference. Sources say there is mutual interest between McNeese and both the Sun Belt and C-USA, though the level of such interest might be different.

Schroyer says he believes the time is right for McNeese to make a move. In the past, university officials have stood still as others around them, like Louisiana-Lafayette, Louisiana Tech and five members of the Southland last summer have moved on.

McNeese President Dr. Daryl Burckel has said on numerous occasions that will not happen this time.

“We will not miss that train if it comes around again.”

Well, you can hear the whistle blowing from several directions.

“Our ultimate goal is to become an FBS (Football Bowl Subdivision) playing institution,” Schroyer said. “The divide between the haves and have nots is getting wider and wider every day. We ultimately want to be in a situation where we are the most profitable.”

While the WAC will play as a Football Championship Subdivision league, it does have plans of returning to the top football division.

McNeese’s wondering eyes began last year when five Southland schools announced they were leaving for other FCS conferences. Four went to the WAC and the other, Central Arkansas, moved to the Atlantic Sun.

All have made it known the move was in hopes of going up to the FBS level in the future.

Things have gone crazy since Texas and Oklahoma announced to the world they were leaving the Big 12 and heading to the Southeastern Conference. Since then the scramble has been on with the latest news coming Thursday when Charlotte, Florida Atlantic, North Texas, Rice, Alabama-Birmingham and Texas-San Antonio were accepted to the American Athletic Conference.

Two schools, Marshall and Southern Mississippi, have talked about leaving C-USA as well and heading to the Sun Belt, which is talking about adding three others. That could include other C-USA schools, leaving that league prime for its own additions. Attempts to reach C-USA officials were unsuccessful.

With all this chaos in college athletics McNeese is hoping this is the right time for a move.

“We want to do what is right for the future of our students and university,” Schroyer said. “Everything is changing so fast we want to be sure we do our due diligence and position McNeese in the best position possible.”