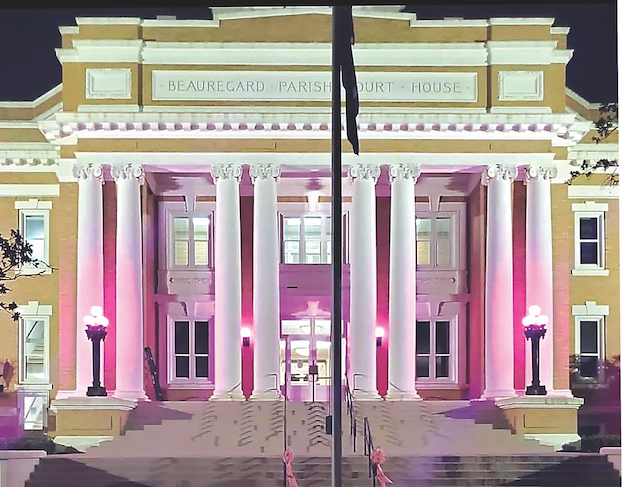 The Beauregard Parish Courthouse in DeRidder is alight in pink in honor of Breast Cancer Awareness Month. (Special to the American Press)

The lights surrounding the Beauregard Parish Courthouse in DeRidder are showcasing the historic building in a glowing shade of pink this month, as the building and its employees seek to highlight breast cancer awareness.

The movement to install the pink lightbulbs in the building’s exterior light fixtures was started by Deputy Clerk of Court Mitze Besse. Besse recently added the term “survivor” to her list of accomplishments, having successfully battled stage 2 breast cancer after she first discovered a lump in 2019.

“It was a very scary moment in my life and, of course, everything that followed was, too, but I’m very proud to say I am a survivor and I feel better now than I have in years,” Besse told the American Press.

In her battle against the disease, Besse has had to endure several difficult procedures including a mastectomy, chemotherapy and radiation. Just this month, she underwent her second reconstructive surgery that she hopes will be her last.

Through it all, she said her biggest support has come from those whom she works with. Amie Smith and Beverly Henry are fellow breast cancer survivors, and Besse credited the women with helping her through the darkest of days during her battle.

“These women have been my rock and my support throughout everything. It didn’t matter if it was words of encouragement or helping me at my home with my recovery, these women dropped everything to be there for me when I needed them and I can’t thank them enough for that,” Besse said.

While they may only be a group of three, Besse said that breast cancer and its effects are far reaching across the departments within the courthouse.

It was for that reason O’Neal and Judge Kerry Anderson gave a resounding “yes” to Besse’s request for the pink lights.

“We are very proud of the job these women have done. We work with some incredible and strong women, and we are honored to support all breast cancer survivors,” O’Neal said.

“This is a disease that affects so many and we certainly cannot take credit for the work these women have done, but we are proud to be able to provide them this support through awareness. Breast cancer affects virtually every family and every workplace. We stand together in support of those fighting this courageous battle,” Anderson said.

The first time she saw the lights, Besse said she was overcome with emotion. For her, the lights symbol love and support for herself and for others who have waged a battle against breast cancer, but they also symbolize their combined hope to save a life.

“We want these lights to start a conversation. I know it can be a frightening thing to talk about, but hearing my coworkers talk about their experiences is what pushed me to see my doctor about my lump. People don’t realize that this can affect so many, including men. The three of us together hope that with these pink lights, we can spur that conversation about listening to our bodies and getting tested if something doesn’t seem right. If we can save even one person’s life with some pink lights then that is the most powerful thing that can come from this,” Besse said.