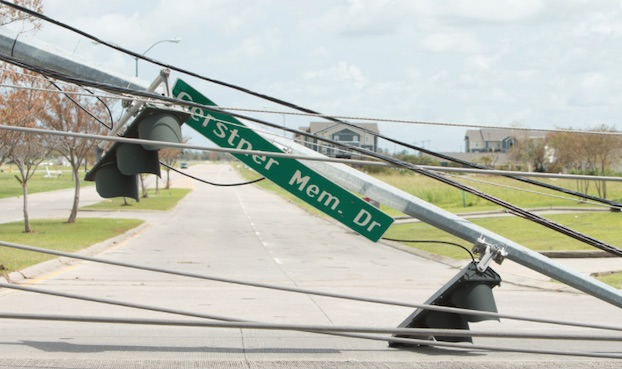 The city has sought bids from outside contractors to assist their crews with the work in order to help expedite this process of repairing city street signs. (Rick Hickman / American Press)

Does the city of Lake Charles have a timeline for replacing the street signs that were destroyed by Hurricane Laura?

It is estimated that more than 10,000 street signs, including stop signs, yield signs and street name signs, were lost or damaged as a result of Hurricanes Laura and Delta  in 2020, according to Katie Harrington, the city’s public information officer.

“Immediately following the storms, city crews did an initial inventory of street signs that were lost, damaged or leaning and crews began the work of replacing and repairing the signs,” she said. “To date, these crews have replaced and/or repaired approximately 4,500 signs.”

Harrington said the city has also sought bids from outside contractors to assist their crews with the work in order to help expedite this process.

“This contract was awarded in July of 2021 and contractors have since been working across the city to reinstall and/or repair more than 5,000 street signs,” she said. “Weather permitting, it is anticipated that this work will be complete by the start of 2022.”

Harrington said if a resident would like to report a missing or damaged street sign, they are encouraged to contact the Mayor’s Action Line by calling 337-491-1346 or submit the location via email to mayorsactionline@cityoflc.us.

What is The Center Square as seen in a recent byline on the front page?

It’s a news wire service, similar to stories generated by the Associated Press.

The Center Square was launched in May 2019 and focuses on state-level government and economic reporting.