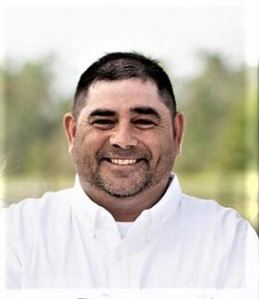 Todd was born July 18, 1974, to Claby Jr. and Julie Mere in Lake Charles, La. He was the last of four boys and completed their family.  He was a mischievous young man and always was the clown of the party.  Todd never said no to a good time, and he always made sure everyone he came into contact with left with a smile.

First and foremost, Todd loved Christ.  He made sure his family knew Christ and he also loved to bring others closer to Christ.  Todd was a member of St. Theresa Catholic Church in Carlyss where he served on many Men’s ACTS Retreats and also enjoyed serving on Teen ACTS Retreats.

Todd married the love of his life Dec. 21, 2001, Dianne Pettefer Mere. Together they raised four incredible children, Tyler, Abby, Trinity, and Kenzley. Todd never missed a beat with any of their activities, he made sure to always push them to be more, to never give up and to always walk in their Faith.

On Sundays you could always catch Todd on the couch watching the Saints and checking his fantasy football stats on his phone.  If it was offseason for football, you would often find Todd standing on the wharf at the family camp or on the water with his brothers/cousins/friends casting a line and rippin’ lips.  To know Todd, you loved Todd, anytime you were around him you always knew there was going to be many many laughs with lots of pranking going on.  Todd’s family was the light of his life, he always loved when he had all of his children and grandchildren together.  PawPaw (Dad) was the fun one who always made ice cream cones, went for walks down to the pond, never got tired of playing catch and was ALWAYS making TikToks.  He loved attending marching band festivals, softball tournaments, cheer competitions and school activities to support his children.

A Mass of Christian Burial for Todd will be at 10:30 a.m., Wednesday, Oct. 20, 2021, at St. Theresa Catholic Church in Carlyss. Visitation will be from 3 p.m. until 8 p.m. with a ACTS rosary at 6 p.m. on Tuesday, Oct. 19, 2021, at Johnson and Robison Funeral Home in Sulphur.  Burial will be at Mimosa Pines South under the direction of Johnson and Robison Funeral Home. Fr. Luke Krzanowski will officiate services.