Tenants could be back in shopping center by next summer 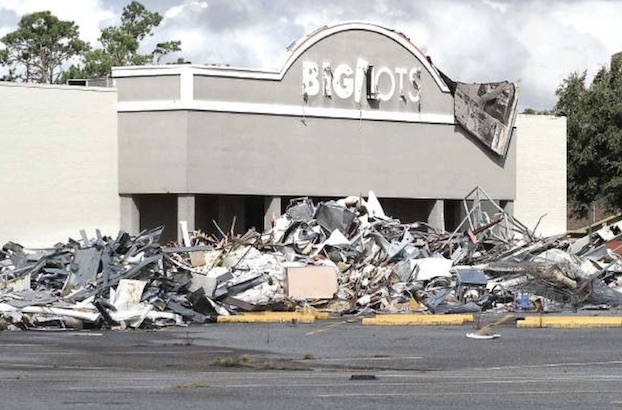 The head of the Baton Rouge-based real estate company that owns and manages the Oak Park Square Shopping Center in Lake Charles said there are plans to rebuild part of the property and have up to half of its existing tenants back by July of 2022.

The 185,000-square-foot center, located on the corner of Gerstner Memorial Drive and East Prien Lake Road, still has plenty of debris piles in the parking lot after Hurricane Laura severely damaged it in August 2020. Donnie Jarreau, owner of Jarreau Real Estate, said Thursday that the facility suffered $13 million in hurricane-related damages and was considered a total loss. Jarreau Real Estate has owned Oak Park Square Shopping Center since 2016.

“We’ve never had a loss that substantial,” he said.

Despite the damage, Jarreau said there are plans to develop seven acres of the 14-acre tract because half of its tenants plan to return. Some of those businesses include It’s Fashion, City Gear, Cricket Wireless and H&R Block. He said the company is close to signing leases with Big Lots and Affordable Furnishing.

“We like the area, and we bought the center for investment purposes,” he said. “It’s always been a great center for us, and we’re committed to the property and rebuilding.”

Hobby Lobby and Sears Outlet will not be returning to the shopping center, Jarreau said. A new Hobby Lobby store will be built at 1660 West Prien Lake Road.

Jarreau Real Estate is talking with other businesses, such as grocery stores and retailers, to fill the space once occupied by Hobby Lobby and Sears Outlet. Options for that part of the property may include development, selling it, a joint venture or demolishing it.

“As developers, we’re open-minded, as long as it makes sense to us and the city,” Jarreau said. “Nothing is set at this time. We will probably demo what we don’t lease out.”

Jarreau said he has spoken with Mayor Nic Hunter’s office about reports of homeless people getting into the damaged buildings, despite the site being secured. City Administrator John Cardone confirmed the city and Jarreau have spoken and are working together to address the issue.

Jarreau explained why it took more than a year to move forward with rebuilding the property.

“It’s taken six to nine months to settle insurance,” he said. “We also had to get the property released from the lender, and it took a while to get control of the property.”

Jarreau Real Estate owns roughly 2 million square feet of retail property from Louisiana to Florida, with 70-80 percent of its property based in Louisiana, he said. It also owns Tractor Supply in Moss Bluff and a retail center next to the Kroger Grocery Store in Sulphur. Both are currently open, he said.