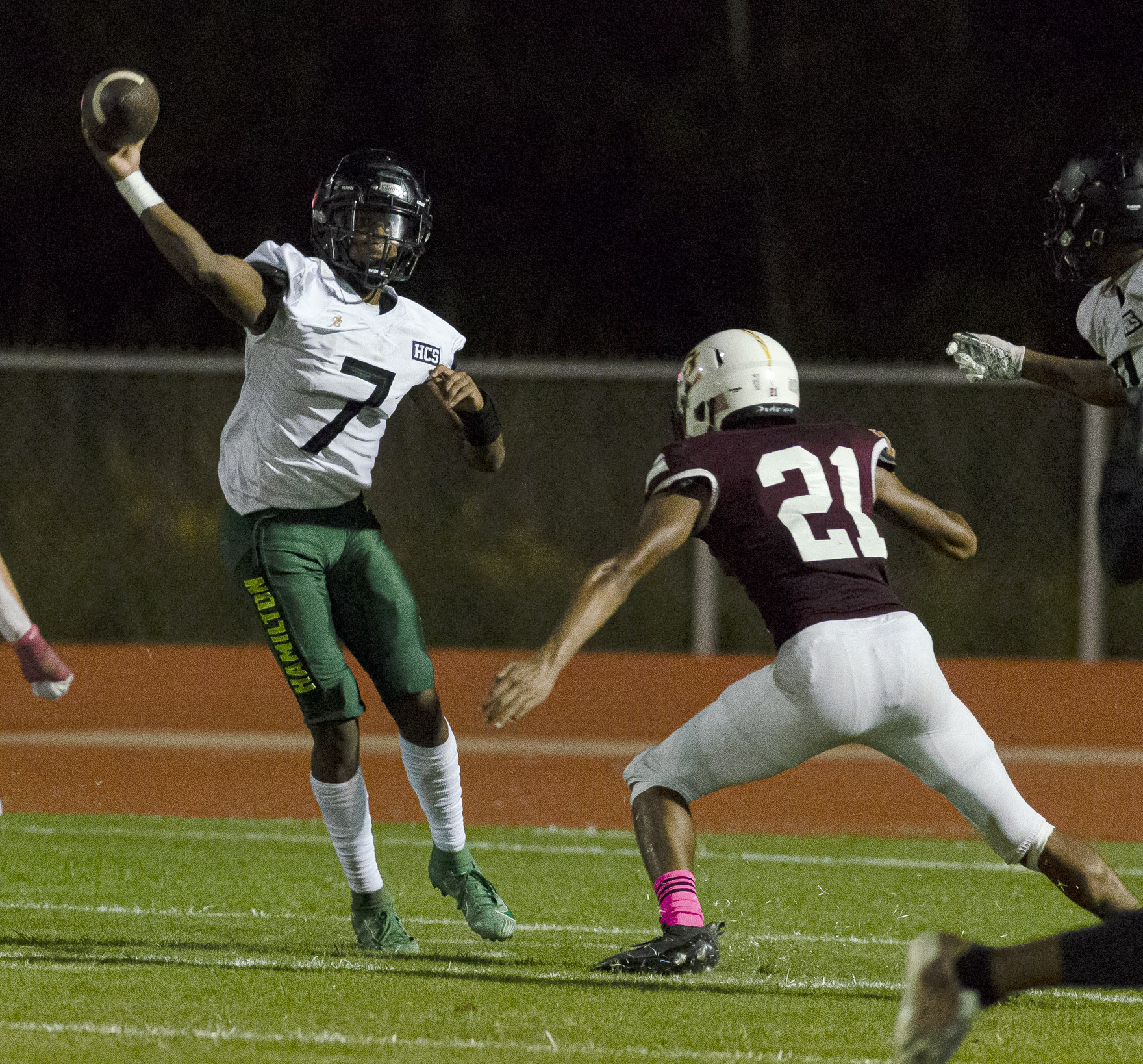 GRAND LAKE — Hamilton Christian quarterback Neiman Sullen would not be denied Friday, and led the Warriors on a last-minute winning drive to upset Grand Lake 24-21.

“I challenged my team,” Hamilton head coach Dexter Washington said. “They had a chance to defeat the No. 1 team in the state and the state runner-up, and at homecoming.

“Can you go in there and pull it out? I am so proud of these guys and my coaching staff. I am proud of the fans. It was a great victory.”

Sullen scrambled away from a pair of defenders and found Samuel Knight in the end zone with 14 seconds left for a 9-yard score on a fourth-and-goal play. He used his legs to extend the winning drive by escaping from the backfield for a 19-yard run on second-and-15 to the Hornets’ 6-yard line. The Warriors lost yards on back-to-back plays setting the stage for the fourth-down play.

Sullen threw two touchdown passes and ran for 105 yards, and Elijah Belton scored twice, including a 93-yard kickoff return, as the Warriors handed the Hornets their first loss.

Grand Lake was ranked No. 1 in the most recent Louisiana High School Athletic Association power ratings.

“They were tired and we were tired,” Washington said. “It was going to come down to the team that would make the play.

“Here we are fourth down and the game on the line, Sullen with his feet, and he finds Samuel Knight in the corner of the end zone. We know what that feels like when we were in Basile.

“They did some good things against us. I thought we could have passed the ball a little better. It shows that Hamilton football is back. What we want to do is build from this. Those cats are seniors, and they know what is at stake now. They are fighting for the playoffs.”

Knight made sure the Hornets didn’t get a last-second score with an interception with 3 seconds left.

Hamilton had another big pass play with 34 seconds left in the first half when Sullen found Belton wide open for a 33-yard score on third down to cut Grand Lake’s lead to 14-12.

Grand Lake took a 21-12 lead on a 4-yard run by backup quarterback Kaden Taylor with 5:50 left in the third quarter, but Hamilton held the Hornets to 18 yards on their next four possessions.

“We had a few things working,” Grand Lake head coach Jeff Wainwright said. “It just wasn’t quite there.

“They outplayed us in the second half, and the scoreboard shows that. Take your hat off to the quarterback (Sullen) right there extending the play. He made a great play and found his receiver.

“We had a lot of breakdowns in some coverages tonight. They did a good job of extending plays. That is what they do. We just have to get better and play more focused.”

Grand Lake’s Ian Vigo scored on runs of 65 and 24 yards in the first half and finished with 120 yards on 19 carries.

Hamilton running back Ze’beian Doffney ran for 117 yards and a touchdown on 21 carries.

Time to turn it around, Cowboys hope to repeat…