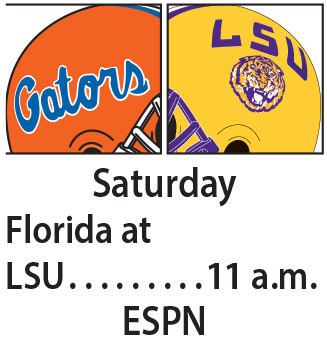 Gloom and doom seems to be settling in over Tiger Stadium for what is normally one of LSU’s most anticipated rivalry games.

But this time, not only is game at the tailgate-unfriendly hour of 11 a.m., the banged-up Tigers are on a two-game losing streak with No. 20 Florida arriving in Baton Rouge with LSU as a whopping 11.5-point underdog.

In other words: save for the fog last year, and the widely held assumption this year that the last act of the Ed Orgeron head coaching era is playing out at LSU, it’s not much different than last season, when the 24-point underdog Tigers, their ranks thinned by injuries and optouts, staggered into Gainesville and ruined the Gators’ playoff hopes with a stunning 37-34 upset.

A repeat of that today might be even more shocking.

So the Tigers will face the SEC’s top rushing team — the Gators (4-2, 2-2) average 274 ground yards per game — without at least seven defensive starters, including both defensive ends and All-American cornerbacks Derek Stingley and Eli Ricks.

“Is it tough? Yeah,” Orgeron said. “But I’m not going to feel sorry for myself. Never will.”

Still, most of LSU’s week was spent trying to “block out the noise” about Orgeron’s job security less than two years removed from leading the Tigers to the national championship.

“I don’t listen to all that stuff,” Orgeron said. “The best thing for me to do is be very positive and understand the expectations of LSU. Everybody knows what’s going on. We don’t need to talk about it. The focus is on beating Florida, and that’s what we’re going to do.”

LSU does seem to be playing it straight.

One of the injured defensive ends, Andre Anthony, a team leader, convened the standard-issue, players-only meeting on Monday, urging what’s left of the roster to stick together to start the second half of the season, which includes ranked opponents the next four games.

Former players have chimed in with encouragement.

“This has been our best week of preparation,” Orgeron claimed on Thursday. “These guys are fired up. Florida’s a rivalry … our guys are ready to play. It’s going to be fun.

“Florida is obviously a rivalry game for LSU. We’re playing at home. They’re going to be a tremendous challenge, but yes, I think it can at least put a little feel good back in the program.”