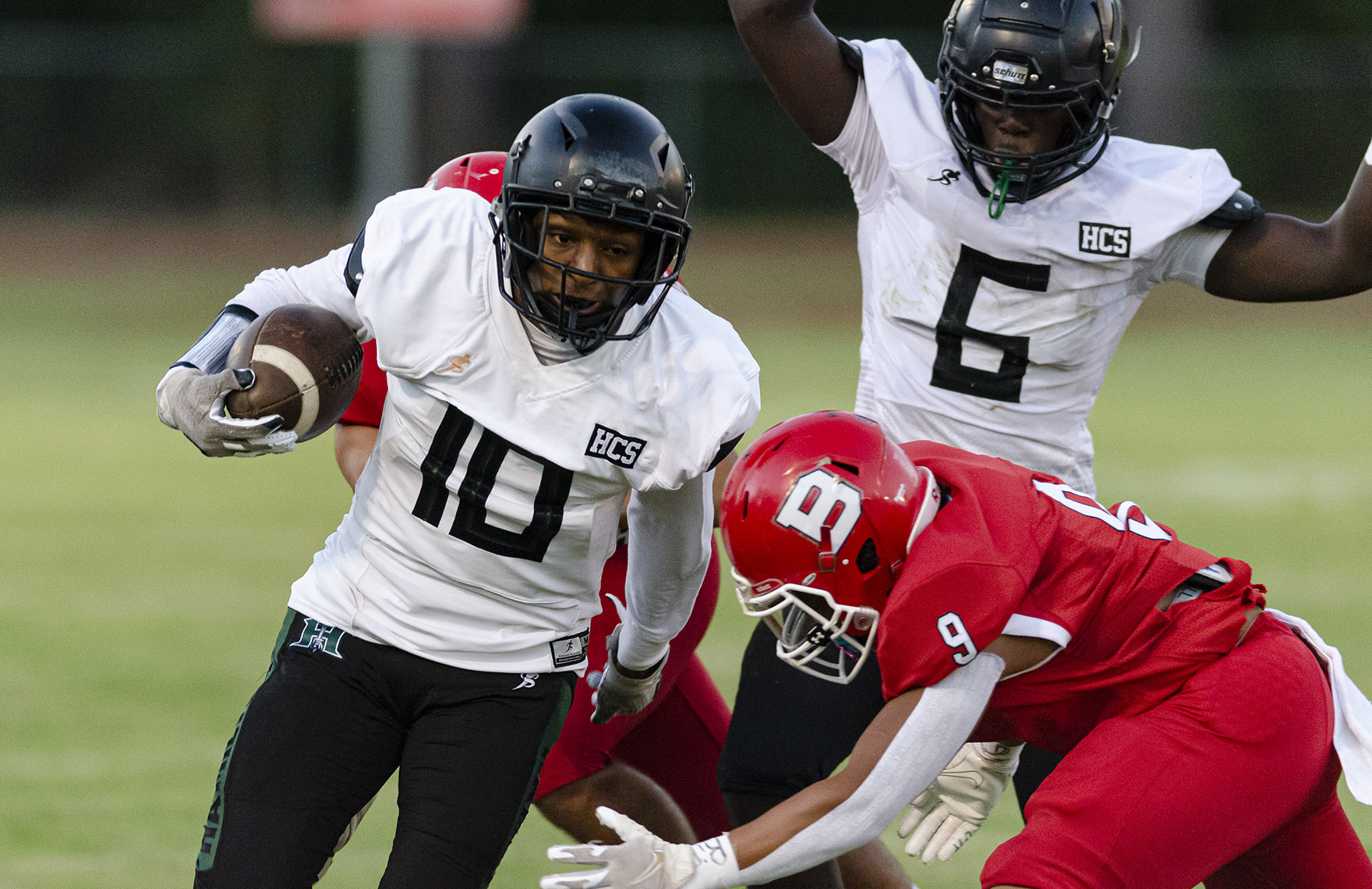 Logan Richard scored twice in the first half for the Hamilton Christian Warriors on Sept. 24 in a District 4-1A game against Basile. (Rodrick Anderson / American Press)

Grand Lake has escaped with wins in back-to-back games to stay perfect, and expects more of the same this week when it hosts Hamilton Christian tonight in a District 4-1A clash.

There is a lot of parity in the district this year. The Hornets (6-0, 3-0) beat Basile and Oberlin by a touchdown, each after trailing in both games. Hamilton (3-2, 2-1) lost its district opener three weeks ago on a last-second play to Basile, and East Beauregard edged Merryville last week by four points.

“When you look at our schedule and look at our district, we all know each other so good,” Grand Lake head coach Jeff Wainwright said. “The Basile-Hamilton game a touchdown separated them two, and the same thing with us, Basile and Oberlin.

“This game is going to be no different. It is going to come down to if we can put together a full 48 minutes together. That week was a really big deal for us.”

Hamilton has won two in a row and can upend the district title race. The Warriors and Basile sit one game back of Grand Lake and East Beauregard.

“It is going to be a really strange district if we come out and do what we are supposed to do,” Hamilton head coach Dexter Washington said.

Washington is preaching patience against the Hornets’ clock-eating split-back veer offense. The Warriors lost by four points to Grand Lake last season after leading most of the game.

“The toughest thing against Grand Lake, like anything in this district, is to be consistent on defense,” Washington said. “The down and distance in this game are going to be very important.

“We understand from our side not to panic or get in a rush because we are playing a team that manages the clock. You fall behind a veer team, and you feel like you have to catch up right away. Next thing you know you have a turnover, and they drive it for one more quarter and now they are up 14-0. We have to be just as methodical with our game plan as we know they are going to be with theirs.”

Hamilton has spread the ball around this season. Running back Zebeian Doffney has more than 300 yards rushing. Quarterback Neiman Sullen has completed 88 of his passes in district games, and receiver Elijah Belton is coming off a 95-yard, two-touchdown performance. The Hornets don’t want to play catchup this week.

“It seems like everybody that can touch the ball for them has the capability to score, and they do a good job spreading the ball around and use a lot of different schemes,” Wainwright said. “Our kids are going to have to be really smart in finding the football.

Next man up, starting RB job falls to McMahon