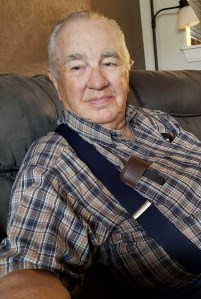 VINTON – Founder and Director of the City of Refuge Veterans Homeless Shelter, Burton “Bro. Burt” Elroy Stigen, 83, passed away on October 13, 2021 in a local hospital. He was born on October 5, 1938 in Aneta, North Dakota to Ole’ & Julia (Quam) Stigen, immigrants from Snarum, Norway.

He was a Vietnam Veteran who proudly served his country in the United States Army and the United States Department of Defense from 1961 – 1966. During his first years in the Army, he served in Japan and the Philippines, where he was baptized in the Pacific Ocean. While there he learned sign language and taught scripture from the Bible to deaf children at a local orphanage. Burt suffered an injury and was held as a Prisoner of War while serving under the Department of Defense.

After being discharged from the Army he worked for 10 years in Libya, where he found the people hungry for more about Jesus Christ and who He was. Burt began smuggling Bibles into Libya and established an underground church, which landed him in prison. The church members went to his aide and was able to obtain his release through an embassy in South Africa. Upon his return to the United States, he became employed by Westlake Polymers as a Calibrations Specialist where he retired.

He was an ordained minister of the Nazarene Church and pastored at the Nazarene Church in Vinton for many years. He felt the need to start a homeless shelter focused on Vietnam Veterans. He looked for property and found a former hotel on old Highway 90 west of Vinton, known as the Shady Rest Motel. In 1986 Ir-Miklato Ministries-City of Refuge Veterans Homeless Shelter was formed which he managed with the assistance of his wife until the time of his illness and death.

Bro. Burt was a life-time member of the VFW Post 9854 and American Legion Post 208 in Vinton, Vinton Mayor’s Armed Forces Committee, Point Man Ministries, where he served as chaplain on numerous occasions for the Vietnam Veterans Wall, VVA Chapter 348 and Director of the City of Refuge for 36 years.

The family would like to thank the staff and doctors of West Cal-Cam Hospital’s ICU unit for all of their compassion and care of Burton and his family. Especially Dr. Soileau and two angels disguised as nurses, Johnny and Paul.

Words of comfort and fond memories may be shared with the family at www.hixsonvinton.com