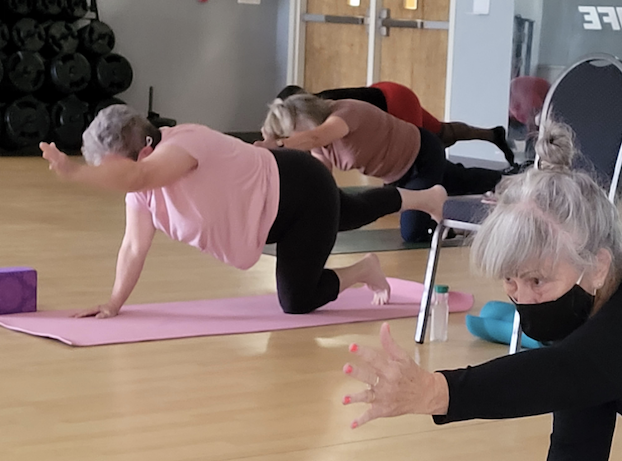 There is something in the air during autumn that makes a body want to reboot. Whether it’s the first morning Southwest Louisiana temps fall below 70 degrees, the bright color of porch pumpkins or imprinted back-to-school memories, fall can have the feel of opening to the first page of a brand new college-ruled notebook (for folks of a certain age who remember school before computers and the Internet).

A reboot that adds more movement in the life of anyone who feels stuck is a good idea, but for Baby Boomers born between 1946 and 1964, it is especially important. Spring is in the rearview mirror and winter is around the bend, literally and figuratively. Add that to what’s going on in the world and here at home that threatens to depress and isolate. If there’s ever been a time to “Bust a Move,” it’s now.

It’s a clarion call during days when the sand can look like the most inviting place to stick our heads and the recliner the easiest place to stick our tails. Exercise also helps alleviate some feelings of depression and may increase focus.

Adele Stewart heads up the Dynamic Dimensions Silver Sneaker program. Yoga, water aerobic, core and other strengthening classes are for individuals of any age; however, for individuals aged 65 and older insurance may pay for membership.

“An insurance company started Silver Sneakers after it realized it would be less costly to pay for prevention than treatment,” Stewart said.

She noted that exercise and social interaction have always been important for warding off depression and mental decline but perhaps those benefits are even more vital today because of COVID, natural disasters and other current events.

“What we’ve done for so many years is talk at people as experts instead of talking with them. Now we are demonstrating the importance of meeting them where they are. I know Fitness is part of our name, but a model that better represents what we do here at Dynamic Dimensions is to coach you in your lifelong wellness journey.”

It doesn’t matter where or how a person begins, the shape they are in, the workout clothing they may or may not have, their weight or age. Trahan told about one woman who had a knee replacement. She didn’t want to take a class because it was difficult to move from standing to floor exercises. She stuck with it. She used the steps (from a portion of the cardio and strengthening exercise segment during the class) to lower herself. She used a chair for balance as needed. She was given assistance if she requested help. That was two months ago and now she can get up and down without any assistance.

Jana Cormier, one of Stewart’s yoga students, thinks classes helped strengthen her quads and stabilize her knees making it possible to put off knee replacement for the time being. Her doctor agrees.

Yoga class participants use bolsters, blocks and chairs and are constantly reminded to modify the movement if needed. Other Dynamic Dimension classes focus specifically on balance, strength, mobility, agility and flexibility.

“Move more at home and make bolder movements,” she said. “When I’m in my kitchen, I put music on and that helps. Anyone can do it. I just move my arms around, bend, sway, twist and and move to the music.”

Call it dancing. Call it a reboot. Call it exploring range of motion.

“As a fitness organization, what we are encouraging people of all ages to do, and seniors especially, is to explore how their bodies move. We even have a functional movement screening service. Our ability to get up and down from the floor or squat easily for instance, has indications for our mortality,” Trahan said.

“Walking is good, but walking may not be enough,” said Stewart. “When people think about retiring they think about traveling more, being with their grandkids. Will you be able to put a suitcase in an overhead compartment? Play with your children? Get in and out of the tub?”

For exercise, weight loss can be a prime motivator, as is reversing a negative health effect, such as high cholesterol or increased diabetes risk. Peggy Scripture Woodson, 72, found herself out of breath one day after an activity that wouldn’t have normally winded her. She also has lipoma, a condition where tissue grows underneath the skin and she was dealing with excess fluid in her lymph system.