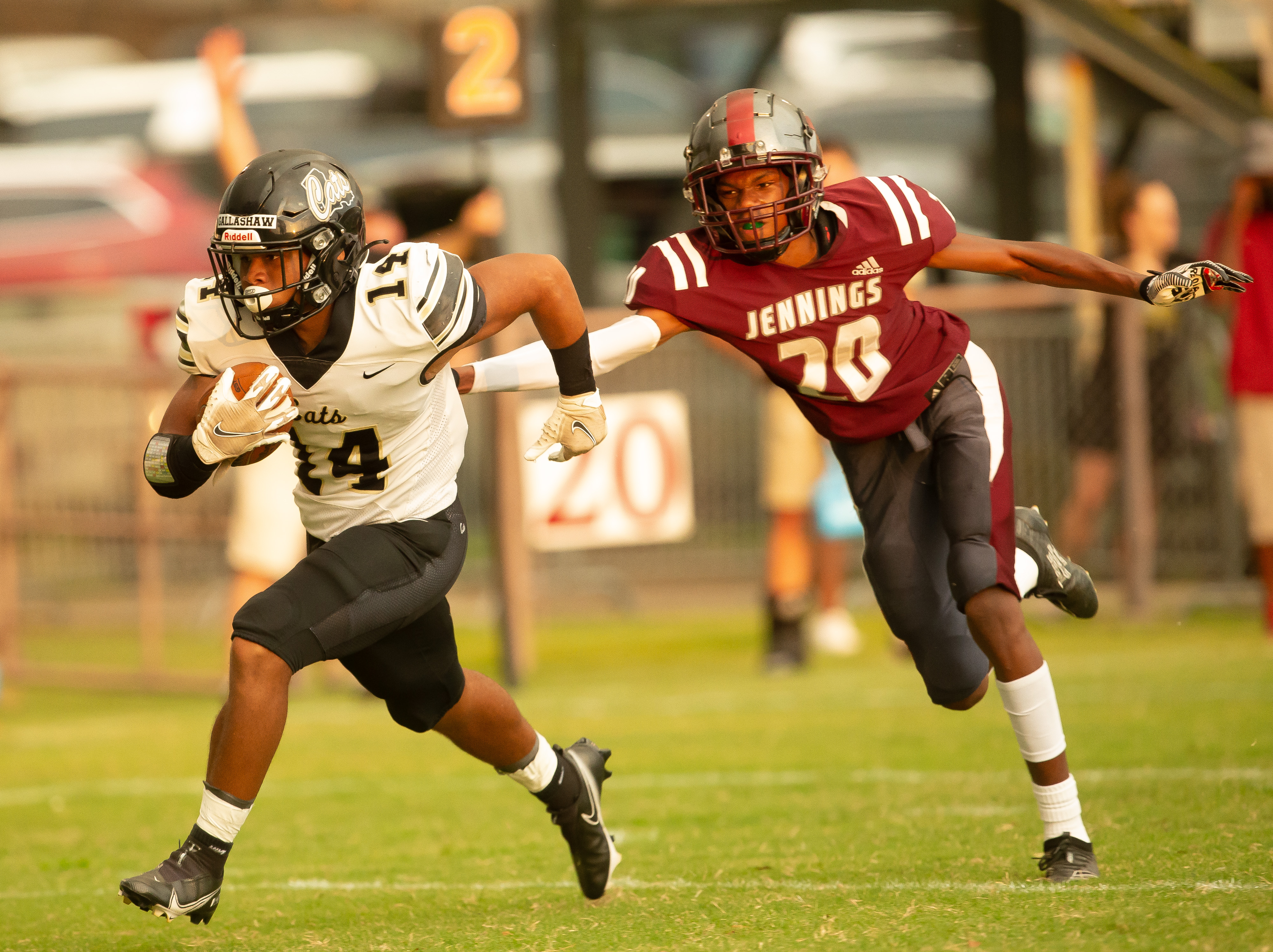 Leesville's Caleb Gallashaw gets past the reach of Jennings Zanarionne Douglas for a big gain. (Rick Hickman / American Press)

1 Hooper Trophy: One of the area’s best rivalries, the Hooper Trophy series between Leesville and DeRidder, takes place this week with the Wampus Cats hosting the Dragons. Last year’s game was not held due to COVID. This year, both teams enter in good form, with each team on a two-game winning streak. Two of the area’s top running backs, Caleb Gallashaw (757 yards, 7 TD) of Leesville and Ronnie Crosby (896 yards, 8 TD) of DeRidder, will feature prominently. Leesville won three straight in the series from 2016 to 2018, while DeRidder won the last meeting 24-21 in 2019. Jose Mijares kicked a 39-yard field goal as time expired in the first half to give the Dragons a 10-7 lead.

2 Key battle: In Jennings, a key District 4-3A battle will take place between undefeated Iowa and Jennings, which opened league play with a resounding 62-42 win over St. Louis last week. The Jackets use a balanced offense to score more than 40 points per week. Jennings has one of the area’s top individual talents in Trevor Etienne, who has moved to quarterback due to injury.

3 Record watch: Barbe receiver Jamaal Levi has been on a tear all season, with 38 catches for 1,135 yards and 14 touchdowns through six weeks. This week Levi leads the Bucs, who have won two straight games, into a District 3-5A game at Lafayette. Levi is within reach of breaking former NFL player Trey Quinn’s school record of 2,141 receiving yards in a season.

4 4-1A showdown: Grand Lake will host District 4-1A challenger Hamilton Christian Friday night. Last year the Hornets beat Hamilton in a 34-30 thriller in Lake Charles. A Warriors win gets them back in the title chase, while a Hornets win further tightens their grip on the title.

5 Heating up: Local volleyball district races are taking shape. In Division I, District 2, Sulphur and Sam Houston trail leaders Comeaux and Southside by a game. Each will get a chance to knock one of the leaders today when Sam Houston hosts Southside and Sulphur hosts Comeaux with a potential to create a six-way tie if Lafayette and Acadiana win as well. In Division III, District 1, Westlake and St. Louis Catholic are tied for the lead, and LaGrange trails Division II, District 3 leader Beau Chene by half a game. Division III, District 2 kicks off Wednesday when No. 6 Iota hosts No. 15 Eunice.