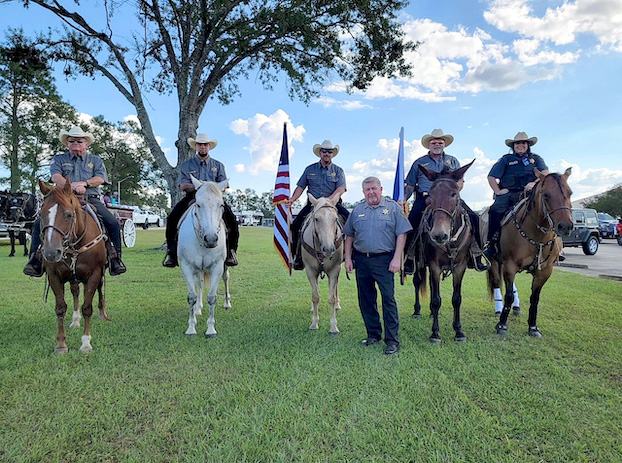 Beauregard Parish Sheriff Mark Herford, center, stands with members of the new BPSO Horse Posse after they were introduced to the public during the Beauregard Parish Fair Parade. (Special to the American Press)

Beauregard Parish Sheriff Mark Herford announced on Monday that he is re-establishing the BPSO Horse Posse in an effort to better service the community and its hardest-to-reach terrain.

The seven-member team was officially unveiled to the public last week during the Beauregard Parish Fair Parade, and Herford said they have already received positive feedback from the public.

“Community members, especially the kids, have reacted very positively to the unit and what they bring to our department,” Herford said.

“I do believe that we are more approachable than perhaps traditional deputies might seem because of the horses. Just being at the parade and the fair, we must have been stopped 20 to 30 times just so kids could pet the horses and that makes a difference when before kids might have been nervous to approach a deputy,” West said.

“In a way, it leaves happy thoughts with a child after they have petted the horse and talked to us. That makes us all feel like we have experienced something really special and is why we love doing this.”

To prepare the horses for their upcoming duties, West and the other deputies have been training once a month for the past six months at the Beauregard Covered Arena to make sure their horses are acclimated to the sounds, sights and smells they will encounter in their work.

“They have been using patrol units with lights and sirens on and walking all around the horses to recreate crowds and conditions so that we have the horses prepared for their job in the safest way possible. These deputies have taken their jobs very seriously, and I’m incredibly proud of their dedication,” Herford said.

Already, the team has proven to be instrumental in their work. While providing a security detail at the Beauregard Parish Fair last week, the deputies on horseback were responsible for one of two drug arrests in the parking lot of the event.

Their true value though, according to Herford, will be in their assistance in search and rescue operations.

“These deputies will be able to reach areas that are generally tough to reach even for our ATVs, and they will be less damaging to the area,” Herford said.

Herford recalled in recent years an incident where an elderly resident had gone missing for several days near a local river. He was found deceased, from health complications, only after a deputy was able to go through the area on horseback to reach the man’s last location near the river bottom.

“His passing wasn’t caused by our inability to reach him that long, but were it not for that person on horseback who knows how long it would have been before we found him. In the event that, God forbid, a child goes missing, I feel better knowing that we have every resource available in that moment,” Herford said.

The unit will also serve as a cost-effective approach to an increase in community services, and not at the taxpayers’ expense. According to Herford, the team will operate solely on a volunteer basis, and provide services as an on-call operation with their own animals at any hour.

“I am very excited and really happy to have them back and on duty now. I really look forward to watching them develop their skills and seeing just how good they’re going to be for Beauregard Parish,” Herford said.