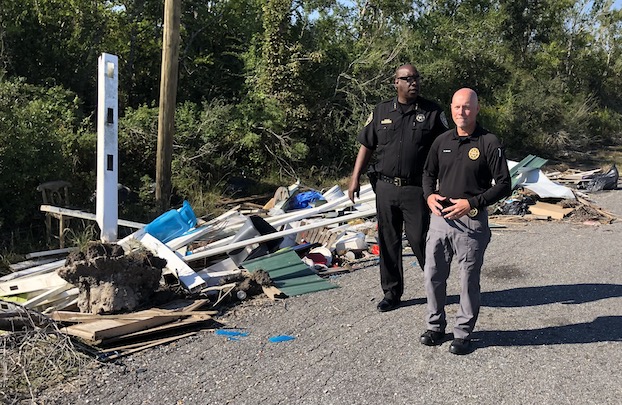 Stepped-up enforcement to battle illegal dumping and litter is under way as Calcasieu Parish recovers from multiple 2020-21 natural disasters.

The Police Jury has enlisted fresh law enforcement parishwide for the new effort, adding teeth to its ongoing “Pick it Up” campaign.

The enforcement message is intended to be loud and clear:

• Post-storm, “black truck” curbside debris pickup has ended. Storm debris can’t be piled out by the road like it used to be.

• Dumping debris — or anything else — is illegal, whether it’s done at ditches, dead-end streets or properties misused for secret dump-and-runs.

• The consequences for dumping can include fines and even the suspension of driving privileges.

As the Police Jury sees it, it’s time to clean up Calcasieu Parish.

The parish’s point person is Litter Manager Wyvette Pryor-Cousin, whose efforts have ranged from community outreach, to signage, to multimedia campaigns.

Now, police jurors, mayors and other officials — they’ve seen illegal dumping firsthand in their own cities and districts — have re-affirmed their support of the Pick it Up effort as attention turns to enforcement.

Pryor-Cousin has added some powerful new recruits the battle. One of them is Ward 3 Marshal Nathan Keller.

“We’re taking litter seriously,” Keller said, surveying a dump site south of Lake Charles — a pile that skirts along Levee Loop and chokes off the drainage ditch underneath it. “We will no longer tolerate this in our community.”

Keller is using his office’s resources to help with Pryor-Cousin’s new enforcement efforts.

“We’re stepping up the forces,” he said.

Keller’s counterpart on the other side of the river is doing the same.

Sulphur-based Ward 4 Marshal Brandon Dever is directing his own efforts to crack down on illegal dumping in West Calcasieu.

“We’re partnering with (Keller) and the Calcasieu Parish Police Jury to start enforcing the litter problem parishwide,” Dever said. “Don’t dump it. Pick it up.”

Litter was already a problem parishwide — the Pick it Up program predates the 2020 hurricanes — but the recovery has added a whole new variety of illegal dumping by unscrupulous property owners, businesses, contractors and subcontractors.

Keller and Dever, in fact, will serve as spokesmen in the campaign’s first TV commercial. Police jurors and other officials will also carry the message on various platforms.

The major points made by the parish and its new anti-dumping alliance are:

• Enforcement comes with penalties — and they may include arrest, a ticket, a fine and even a temporary driver’s license suspension.

The Police Jury is also emphasizing the solutions to the problem — such as using the parish’s solid waste convenience centers. The centers are located at 5500-B Swift Plant Road in Lake Charles and 2915 Post Oak Road in Sulphur. They are open 7:30 a.m.-6:30 p.m. Thursday through Monday.

The centers are free to any parish resident who presents a driver’s license, but there are certain dumping restrictions. Visit pickitupcalcasieu.com for the rules.

The parish is also encouraging civic and business groups to join in litter cleanup efforts through its Adopt-a-Spot program, which supplies free materials to help citizens clean up litter hot spots.