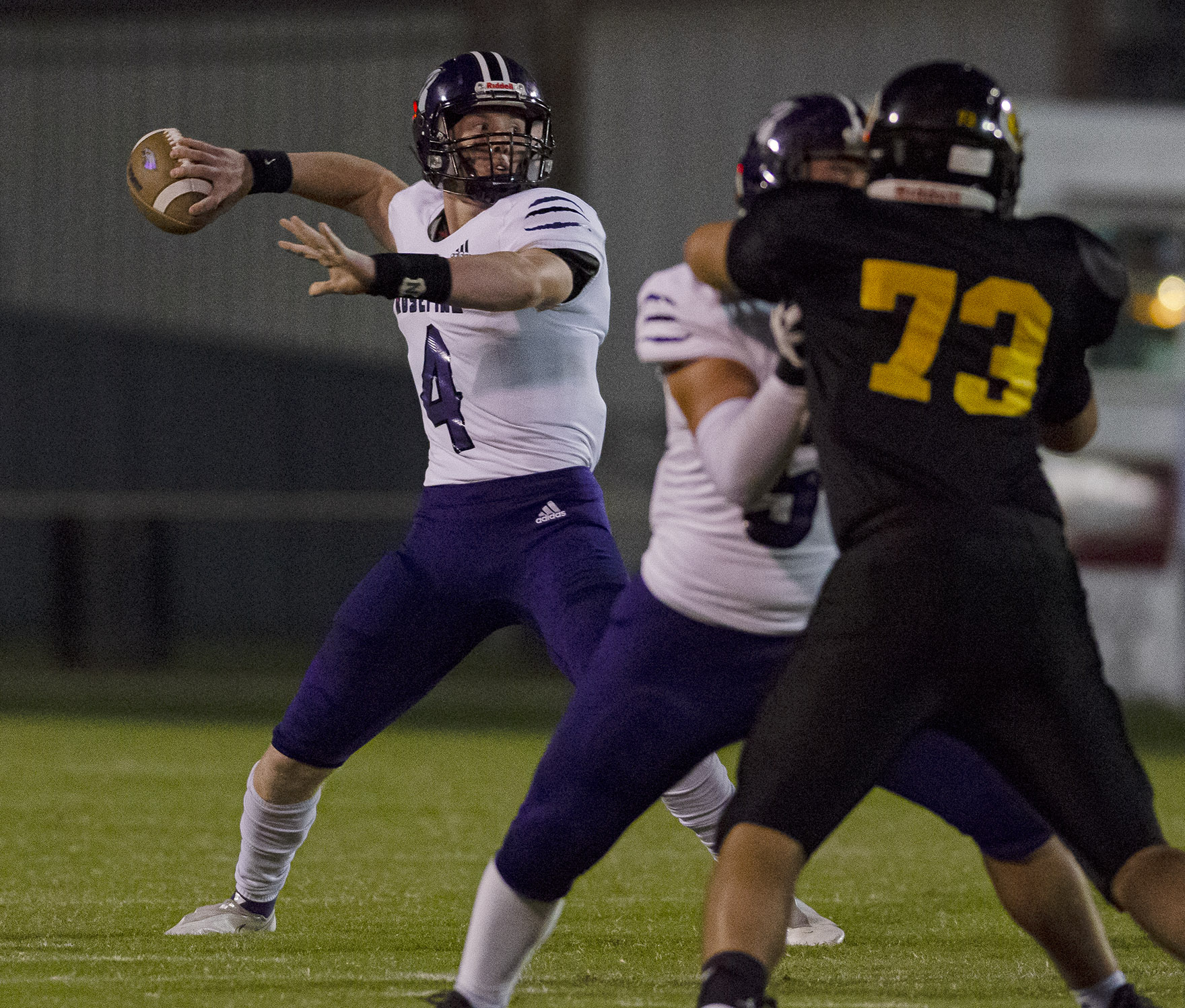 Rodrick Anderson / American Press Rosepine’s Ethan Frey is protected as he launches a downfield pass against the Yellow Jackets Friday night in Kinder. Frey ran for one touchdown and threw for three more.

KINDER — Trailing by eight points, Rosepine didn’t change anything and stuck to its game plan.

Forty-two consecutive points later, the Eagles wrapped up a 48-22 win over Kinder to open District 5-2A play Friday night.

“We knew we needed to establish somewhat of a running game in the first half. We did just enough to keep them honest, then hit them with a few big passes right before halftime. It changed the (complexion) of the game. Kudos to our kids offensively and defensively. They made adjustments defensively and made a few stops and got rolling.”

It was the Eagles’ first win over Kinder since 2012 and second in six meetings and gave them a boost after losing their first game of the season last week to Logansport, without the services of Frey.

“We open with Kinder, which has been the district champ since I took this job (in 2018), basically,” Ducote said. “It is a pretty tough task. They are a good football team and always well disciplined and well coached. To beat them at their place is pretty special. It gives us a little momentum.

“We didn’t play well last week. We didn’t have Ethan, and Logansport took it to us. We knew we had to come out here and reestablish ourselves. I thought the kids did well. It was a great team effort all around.”

Kinder took a 14-6 lead with 8:48 left in the third quarter on a 2-yard quarterback keeper by Graham Fawcett, but the Eagles scored three touchdowns in the final 3:49 of the first half to break the game open.

Frey scored on a 12-yard run to tie the score at 14-14, threw a 27-yard touchdown to Cole Donahue and a 36-yarder to Aden Cline on fourth down to put the Eagles up 28-14 at the half. Cline added an interception early in the fourth quarter.

“Right there at the end of the first half, they scored two touchdowns in the last five minutes, and that was really a backbreaker because we knew they were getting the ball first in the second half,” Kinder head coach Bret Fuselier said. “That was really killer, especially the fourth-down play.

“We are going to learn from it and move on. We will get better because of it. I just told the guys that we are never going to accept losing. Our kids had some fight in them tonight, and there were some things that went on that I was proud to see from my kids.”

Ducote left no doubt the Eagles were in control when he scored on a 67-yard run to open the second half, then added a 76-yard run in the fourth quarter. He broke multiple tackles on both plays and ran for 183 yards in the second half.

Rosepine’s Isiah Stinson had seven catches for 79 yards and a touchdown.