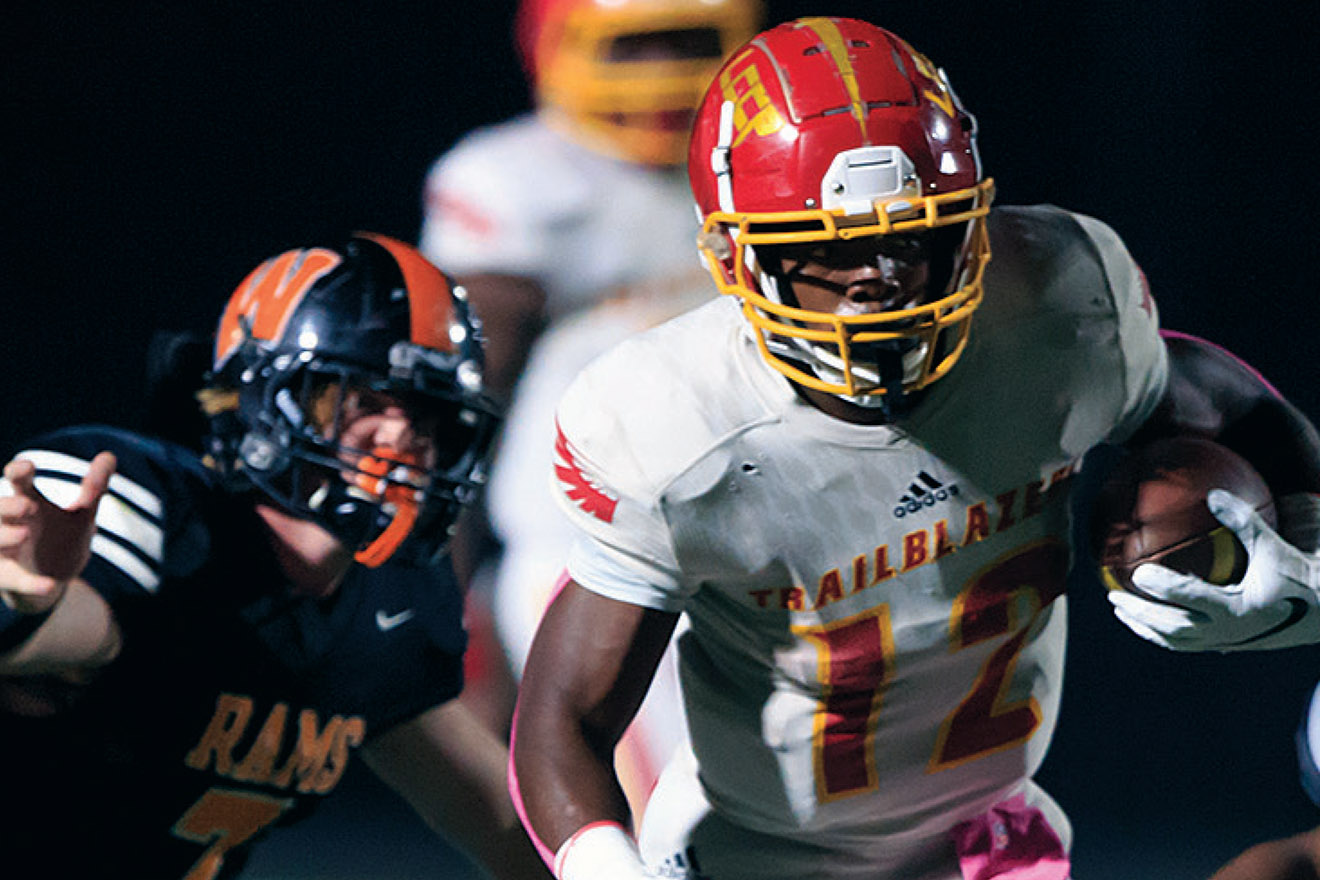 By Robbie Magness
Special to the American Press

WESTLAKE — Lake Charles College Prep slugged it out with Westlake for a half, then turned on the afterburners and ran away with a 40-7 victory in District 4-3A play Friday night at Max Caldarera Stadium.

Leading 13-7 late in the third quarter, LCCP forced a turnover on downs at their own 15-yard line. Two plays later, Devonte Guidroz sprinted 77 yards to push the lead to 20-7.

Three minutes later, quarterback Josiah Bushnell hit Eric Beloney with a short pass, and the receiver did the rest, turning a one-play drive into an 80-yard touchdown.

Westlake (5-1) drove to the LCCP 1-yard line on the next drive, but the Trailblazers (3-3) turned away three runs to take over. On the next play, Guidroz went straight up the middle, veered right, and sprinted down the sidelines for a 99-yard score. LCCP head coach Erick Franklin said his defense’s goal-line stand showed “grittiness.”

“These kids are tough,” he said. “We’ve been through a lot. We came in wanting to get a leg up in district play. … Same focus as before. We still think we’re the best team in Southwest Louisiana.”

Bushnell connected with Beloney again for the game’s final points, as the receiver did a balancing act down the left sideline for a 29-yard score.

Westlake’s defense entered the game looking to slow down LCCP running back Trevonte Citizen, an LSU commitment, and they were successful, holding him to 13 yards on 10 carries. Turning to other weapons, though, the Trailblazers piled up 477 yards of offense, including 234 yards on the ground. Bushnell was 10-of-12 passing.

“I thought we did a pretty good job of bottling them up for the most part,” said Westlake head coach John Richardson, “but then we gave up too many big plays.

“We’ve got to learn from our mistakes and do a better job.”

LCCP looked like it might run away from Westlake early on, scoring on 61- and 65-yard drives on its first two possessions of the game.

Bushnell connected with Keshlon Jackson for a 54-yard TD pass, then ran one in from 4 yards out as the Trailblazers took a 13-0 lead on the first play of the second quarter.

The Rams defense tightened, though, holding the Trailblazers to 39 rushing yards in the first half.

Westlake marched 81 yards in 12 plays midway through the second quarter, and quarterback Jamaal Guillory scored on a 6-yard run to cut the lead to 13-7 at halftime.

Guillory led the Rams with 150 rushing yards but could never get an effective passing game going.

“I thought we had several chances to be in the ballgame,” Richardson said. “We got down inside the 20 and the 10 at least three times, and we didn’t come away with the points.”