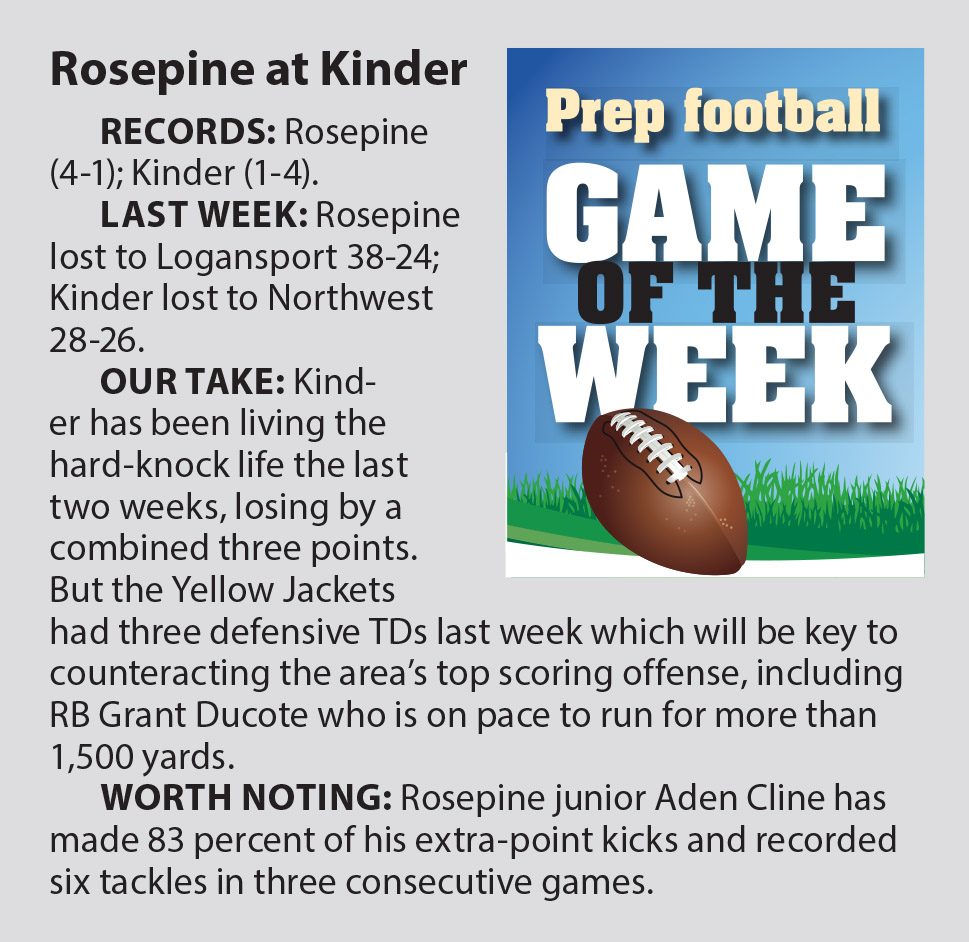 Kinder had some close calls the last two weeks, finding itself on the short end of the score.

The Yellow Jackets want to finish the job this week when they host Rosepine today in the District 5-2A opener for both teams.

“It was two close games that we let slip away,” Kinder head coach Bret Fuselier said. “We lost some leads in the second half. We are trying to rebound. We are fighting a few injuries, but I expect our kids will be ready to play this game.”

Kinder (1-4) lost by a combined three points to Catholic-New Iberia and Northwest after holding leads in the second half.

“Offensively, against Catholic, and it went back to Week 4 against Loreauville, our offense really moved the ball on both teams,” Fuselier said. “But we get near the goal line or the red zone and we find a way for either penalties or turnovers to shoot ourselves in the foot.

“We squandered scoring opportunities. We need to work on that to finish those drives out. Other than that, the offense moved the ball well.”

Kinder had three defensive touchdowns last week and will need another strong defensive effort against the Eagles.

“If our defense continues to create turnovers and do things like that, it should work well for us,” Fuselier said. “(The Eagles) come as advertised.

“Going into this year, I felt like they were the favorite in this district based on what they have coming back. They are seasoned. Of course, everyone knows their quarterback (Ethan Frey) and running back (Grant Ducote), and their defense is pretty stout as well. The quarterback puts it on the money every ball he throws. Ducote is a hard guy to bring down. You rarely see anyone one-on–one tackle that kid.”

Rosepine (4-1) is looking to turn its first loss into a positive.

“I told them after Friday night’s game that we were going to use it as a positive,” Rosepine head coach Brad Ducote said. “It was a very humbling experience. It brought us down to reality and refocused us. The kids are hungry. They are ready to be back on the winning track.”

Ducote said he wants to force Kinder away from its ground game to its passing game that has accounted for 12 percent of its points.

“We have to try to stop the run game and make them throw it more than they want to,” Ducote said. “We have to establish ourselves defensively. I think that will better our chances.

“It is going to take a good performance to beat them at their place. They are just hard-nosed kids and always have been.”