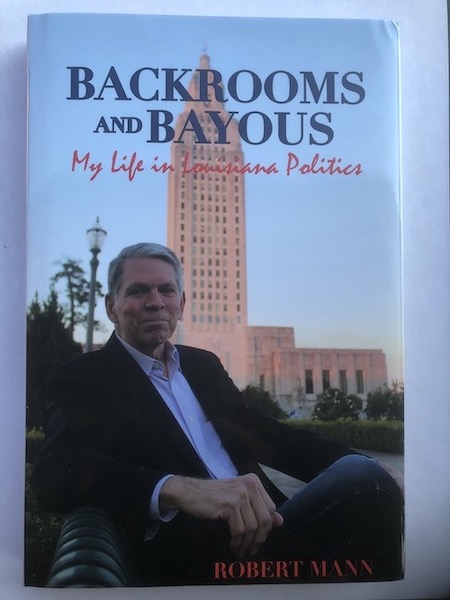 A new book by Robert Mann is filled with events in Louisiana and Washington, D.C.

Robert Mann has earned his political stripes and he tells us how in an extremely informative and easy-to-read memoir titled, “Backrooms and Bayous: My Life in Louisiana Politics,” published by Pelican Publishing.

Mann currently holds the Manship Chair in Journalism at LSU’s Manship School of Mass Communication. He served as press secretary for Democratic U.S. Sens. Russell Long and John Breaux, two of this state’s most successful members of Congress.

“I hope young people and others will read my story and learn from my mistakes,” Mann said. “And I made a lot of them. But I also learned some valuable lessons from my screw-ups and ethical lapses. I hope that confessing them in this book might help those who will govern our state over the next 75 years to avoid some or all of the errors I made.”

Mann grew up in Beaumont. His father became a Church of Christ minister, and the family moved to Shreveport in 1971. His dad got another preaching job in 1975 in Vernon Parish, about four miles west of Leesville.

While working in radio and having always been interested in politics, Mann got involved as a volunteer for Jimmy Wilson, one of the candidates in Louisiana’s 1978 4th Congressional District campaign. Claude “Buddy” Leach, a resident of Leesville at the time, won the runoff election,

“What I learned that year was simple and something I’d have to unlearn in the years to come: there’s nothing more exhilarating than a good fight,” Mann said.

Mann attended Northeast Louisiana University and began newspaper work in 1981 when he moved to Ruston to become bureau chief for the Monroe News-Star. In 1983 and at age 24, he went to work for the Shreveport Journal and covered Edwin W. Edwards’ successful campaign for a third term as governor.

Sen. Long was looking for a new press secretary in 1984, and Mann applied for the job. He got it and described his new boss as “among the most conservative Democrats in the Senate.” U.S. Rep. Robert Livingston of suburban New Orleans was the only Republican in the Louisiana congressional delegation at the time.

Long later decided to retire from the Senate and there was talk he might run for governor in 1987 against Gov. Edwards. He decided against it, and Edwards would later lose to Buddy Roemer.

Mann needed a new job when Long left the Senate and he got one with newly elected Sen. Breaux, who won the 1986 runoff. Mann eventually moved back to Baton Rouge to head the senator’s office there and begin writing a book.

“Legacy to Power: Senator Russell Long of Louisiana” was Mann’s first book, and he later wrote seven more. In 1990 and while still working for Breaux, he said he decided to help save Louisiana by working for U.S. Sen. J. Bennett Johnston whose major opponent was former Klansman David Duke.

Johnston was re-elected and in 1991 Duke ran for governor. Roemer came in third, putting Edwards and Duke in the runoff. Edwards won with 61 percent of the vote.

When Sen. Johnston decided to retire, Breaux and Mann helped elect Democrat Mary Landrieu to the U.S. Senate in 2002. Breaux decided to retire in 2005 and state Rep. David Vitter, a Republican, was elected to the Senate. Breaux had spent 30 years in Congress, 18 of them in the Senate.

Breaux said he hoped moderates like him would continue to make government work for everyone. However, as Mann said, “Our parties are farther apart and less cooperative than ever. Few leaders like Breaux are left.”

Mann said he didn’t want to get involved in another campaign, but he couldn’t turn down Kathleen Blanco. He became her communications director during the 2003 gubernatorial campaign, and she asked him to stay on after she was elected.

Readers will get a behindthe-scenes look at what happened before and after Hurricanes Katrina and Rita dealt the state a deadly blow in 2005. The federal-state conflict after Katrina eventually led Blanco to decide not to seek re-election.

Mann said, “The catastrophe that was Katrina — and there’s no better word to describe it — was manmade. The levees failed, and a city flooded. That’s the story of Monday, August 29, 2005, in southeast Louisiana.”

As a lifelong student of politics myself, I found Mann’s story enlightening and his honesty about his failings gives it credibility. Readers will appreciate his up close and personal accounts of many important events in this state’s history and other events that occurred in the nation’s capital.