Helping out one cup of lemonade at a time 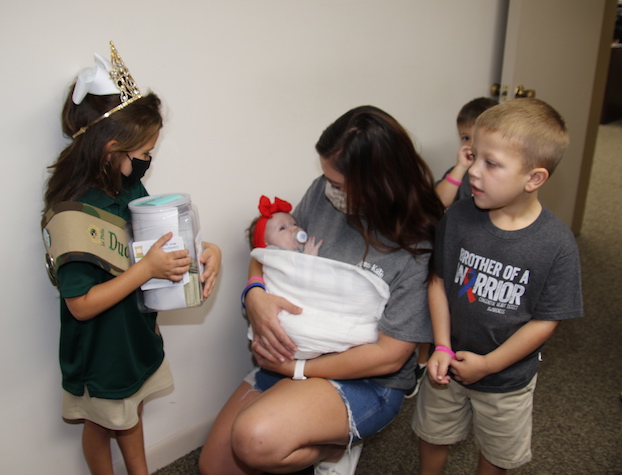 WELSH — When 6-year-old Aria LaPointe of Lake Arthur learned that an infant was diagnosed with a heart defect, she wanted to help.

Although LaPointe had never met the infant or her family, she wanted to help them cover medical and travel expenses by setting up a lemonade stand in her great-aunt’s driveway in Lake Arthur. With the help of her community, LaPointe raised more than $434 to help baby Anna-Kate Johnson and her family.

“We planned it for baby Anna-Kate because she has heart trouble and we wanted to help her and raise money,” LaPointe said.

LaPointe, with the help of family, made four gallons of lemonade, two gallons of peach tea and cookies and brownies to sell. Others donated brownies and a cake to help the cause.

“I learned to be nice, kind and help other people,” she said of the experience.

On Friday, LaPointe got to meet Anna-Kate and her family for the first time and presented the family with the money she raised.

“It has been very overwhelming,” Anna-Kate’s mother, Kayleigh Johnson of Welsh, said of the outpour of support the family has received. “We are so appreciative of everyone who has helped pray for us and helped spread the word to bring awareness about pulmonary atresia.

“People we don’t know have reached out from all over with love and prayers for us and for that we are grateful. It has brought us, as a family, closer to God through our faith.”

Anna-Kate, who is 3 months old, spent her first 86 days in the hospital after being diagnosed with pulmonary atresia, a birth defect of the heart where the valve that controls blood flow from the heart to the lungs doesn’t form at all. She also suffers from arrhythmia.

“Her birth was perfect,” Johnson said. “After getting my epidural, I dilated in no time and she was ready to come.”

Kayleigh and her husband, Andrew, spent the next six hours with their daughter before things went downhill.

“Her grandmother came to visit and when she turned on the light, she noticed how purple Anna-Kate’s lips were,” she said.

A flurry of activity soon followed as nurses ran into the room, she recalls. Anna-Kate was put on oxygen and rushed to the NICU where she underwent testing before being airlifted to a children’s hospital in New Orleans.

She had her first heart surgery on July 8 to install a shunt and a conduit. The shunt later developed a clot that required further procedures.

She was finally released from the hospital on Sept. 24 where she met her brothers William, 4, and Luke, 3, for the first time.

She still has a long road ahead, Johnson said.

“She is still considered critical and faces another heart surgery at around 4-6 months,” she said.

The Johnsons said they are grateful to all the people who are holding poker runs, softball tournaments, auctions and other  fundraisers to help the family. They hope to pay it forward by helping other families, many of them from Southwest Louisiana, who they met at the hospital.

“We want to spread the love and prayers anyway we can,” Johnson said.