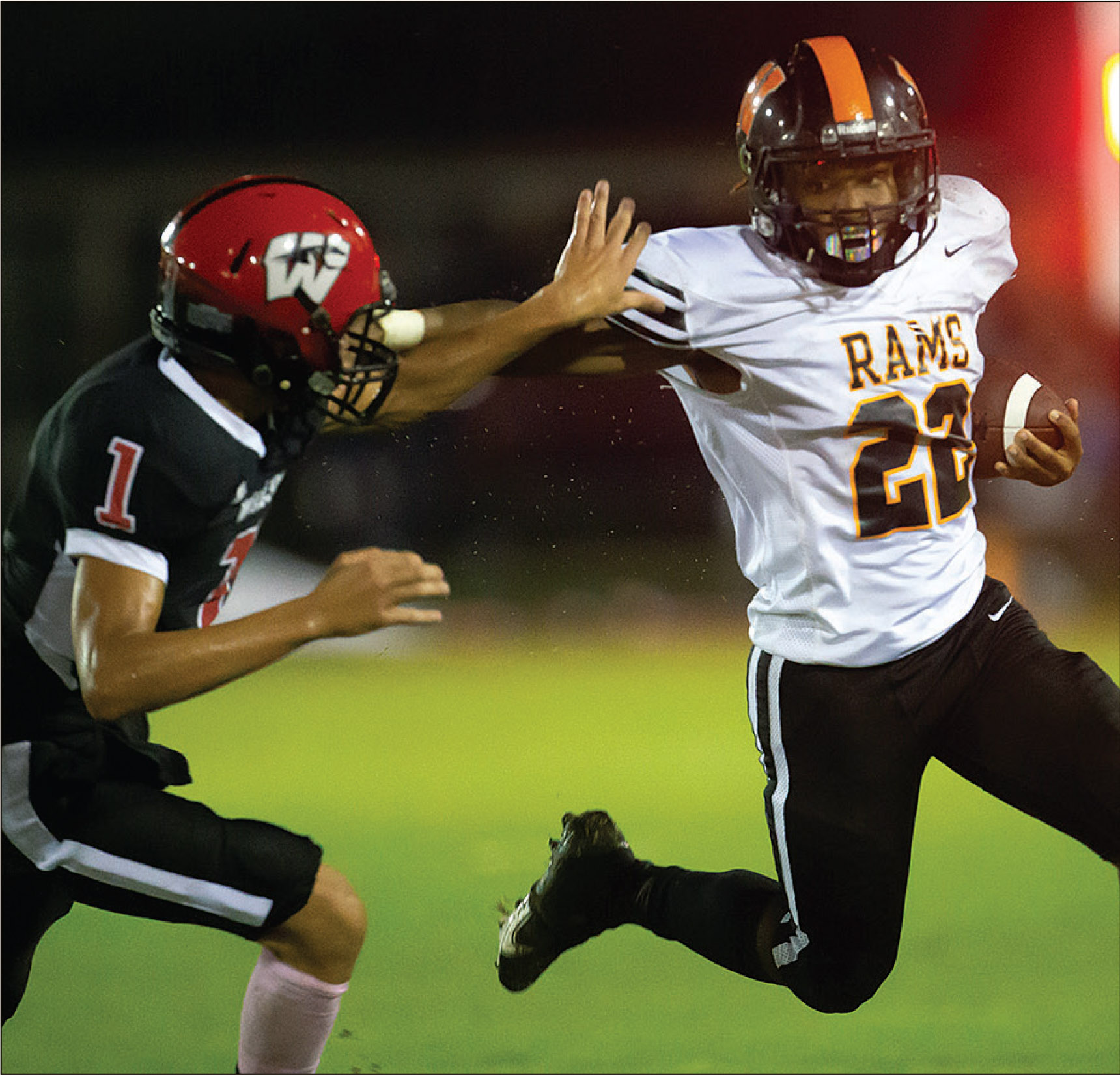 Westlake’s Brandon Jupiter pushes past the reach of the Greyhounds’ Jonavon Begnaud during their game Friday night in Welsh. (Rick Hickman / American Press)

The Rams led 30-7 going into the fourth quarter before the Greyhounds made a late push. The Greyhounds’ first score of the quarter came on a Cohen Fontenot 12-yard run. The next drive saw Fontenot score on a hitch-and-pitch from 60 yards out to cut the lead to one possession. The Greyhounds looked to end zone as time expired to force overtime but were stopped by the Rams.

“I’m proud of guys to be undefeated with sloppy conditions and we played real sloppy at times,” said Westlake head coach John Richardson. “I’m proud of our kids. They fought through a lot of adversity and penalties and we are able to get the win tonight.”

Westlake (5-0) took the opening drive downfield. Brandon Jupiter scored on a 11-yard run for a 6-0 lead.

The Rams took a 14-0 lead when Jupiter scored his second touchdown with 11:22 to play in the second quarter.

The Greyhounds answered with a Fontenot 1-yard score cut the Westlake lead to 14-7 with 7:37 left in the second quarter. Welsh’s next drive stopped inside the Westlake 20-yard line.

Westlake extended its lead on a Jamaal Guillory 16-yard run with 2:02 to play in the quarter. The score was set up on a 50-yard run by Jupiter on the play before.

The Rams extended the lead in the third quarter when Tristan Goodly was on the receiving end of a 50-yard pass from Guillory with 5:49 remaining.

“We were able to move the ball and did a good job with but killed ourselves with penalties,” Richardson said. “We have to clean that up and move on from tonight and prepare for next week.”

“We are a resilient football team and my kids they want to win no matter what and will play hard no matter what,” Welsh head coach Cody Gueringer said. “We didn’t execute in the first half as penalties, turnovers and bad mistakes hurt us, and we can’t have against a really good football team.”

Southeastern La. puts Cowboys in early hole in ‘The…