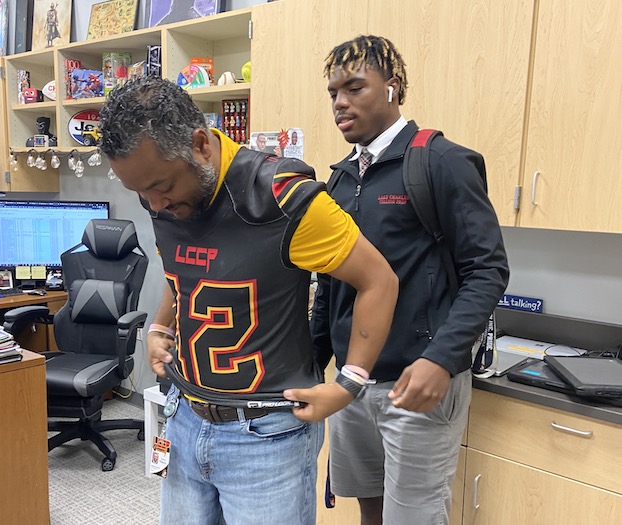 Lake Charles College Prep’s new initiative, “My Jersey, Your Impact,” celebrates the unique relationship between senior student athletes and their teachers. Each day of a home game — for all Trailblazer sports — senior players select a teacher or faculty member to wear their jersey for a day as a token of appreciation for their positive influence.

“I’m just kidding. This is like my extra son at school since ninth grade,” he said.

The two bantered back and forth at the exchange as Citizen said Thierry always helped get him out of trouble over the last four years. “I didn’t get you out of trouble!” Thierry said.

“I just stoped you from doing dumb stuff — silly stuff that would get you put out of school.”

Thierry said it’s been a pleasure to watch Citizen’s growth over the course of high school, stating he’s a natural leader on and off the football field.

“I think a lot of other kids on the team, not even seniors have followed in his path.”

Citizen said Thierry was a natural choice for this week’s jersey honor.

“I feel that he’s one of the teachers that really cared about me and stayed on me since my ninth grade year. He’s someone I can talk to.”

“We were talking about overall student wellness. Not just focusing on the student athlete but the entire child,” she said.

Strobel said the social and emotional aspects of students and teachers is still very important.

“It’s been a difficult two years for everybody in Lake Charles. We still have staff and students who are displaced, still struggling and we don’t want to just focus on a how well athletics is doing. We won a game, yes. But how is the child? How did the child get there and what was your role in that?”

Teachers and staff alike have been pleasantly surprised by the morale boost the surprise jerseys have been.

“It’s been really special for the staff to uplift them. And what’s even more touching is not having seen some of these kids in two years, if they’ve only been interacting virtually. They’ve still still got such a strong connection to these people,” Strobel said.  “It’s like, you’ve got this child you’ve been communicating with via a cell phone or a laptop for two years and yet you’ve still made that kind of impact.”

Symphony to unleash the gators