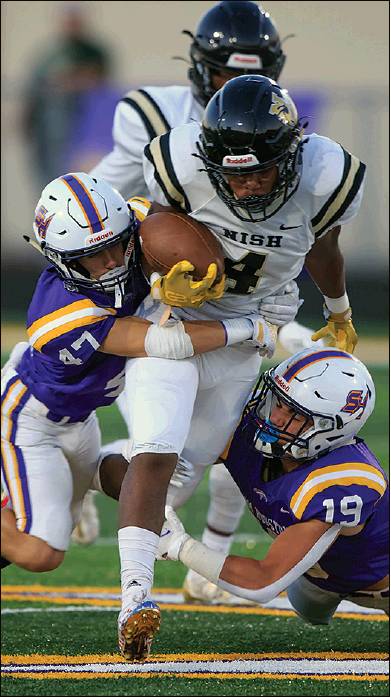 By Robbie Magness
Special to the American Press

MOSS BLUFF — The Sam Houston defense stuffed winless New Iberia on a fourth-and-2 at the Broncos 8-yard line with 3:10 remaining and held on for a 16-10 District 3-5A victory Friday night.

After holding quarterback Christain White to a 1-yard gain, the Broncos (3-1, 1-0) took over at their own 7-yard line. Freshman quarterback Gavin Stout converted a pair of third-down passes that allowed the well-rested Broncos who were off last week, to run out the clock.

Stout stepped in as the starter after an injury to senior Andrew Glass. He completed 14 of 27 passes for 260 yards and a 65-yard touchdown to Dylan Abshire on the first play of the fourth quarter.

“He’s young,” Broncos head coach Chad Davis said of Stout, “but he did a good job of settling in and doing what he needed to do, and he threw a good ball.”

Junior running back Dennis Gardere pounded out 50 hard-earned yards on 17 carries, and Abshire caught seven balls for 150 yards to lead the offense.

But it was the defense that stepped up, racking up a dozen tackles in the Yellow Jackets backfield, including a pair by Dylan Bell, and fumble recoveries by Jamorion Jackson and Leighton Hickman and holding NISH to 174 total yards of offense. A key pass breakup by Landon Kelley, who leapt high in the air to deflect a pass that would have given the Yellow Jackets a first down in Broncos territory late in the third quarter, forced a punt that set up the winning drive.

“Defense played a heck of a game,” Davis said. “You can’t ask anything more of them. They got a few turnovers, some big stops, and that big stop on fourth down. They played very aggressive up front. They were very physical. They did a good job of reading their keys.”

Freshman running back Shanga Charles led the Yellow Jackets (0-4, 0-1) with 18 carries for 62 yards. White completed 4 of 5 pass attempts for 50 yards.

Kickers Dallas Conner of Sam Houston and Luke Landry of NISH traded 38-yard field goals in the first quarter. Conner added a 30-yarder early in the second quarter and the Broncos led 6-3 at halftime.

NISH took the lead early in the second half after Quintin Cook recovered a Broncos fumble at the Sam Houston 12-yard line. NISH scored four plays later on a second-and-goal from the 5, when Charles rushed to the 1 and his fumble was recovered in the end zone by teammate Cedric Moore.

Conner trimmed the lead to 10-9 2 minutes later with his third field goal, this one from 42 yards.