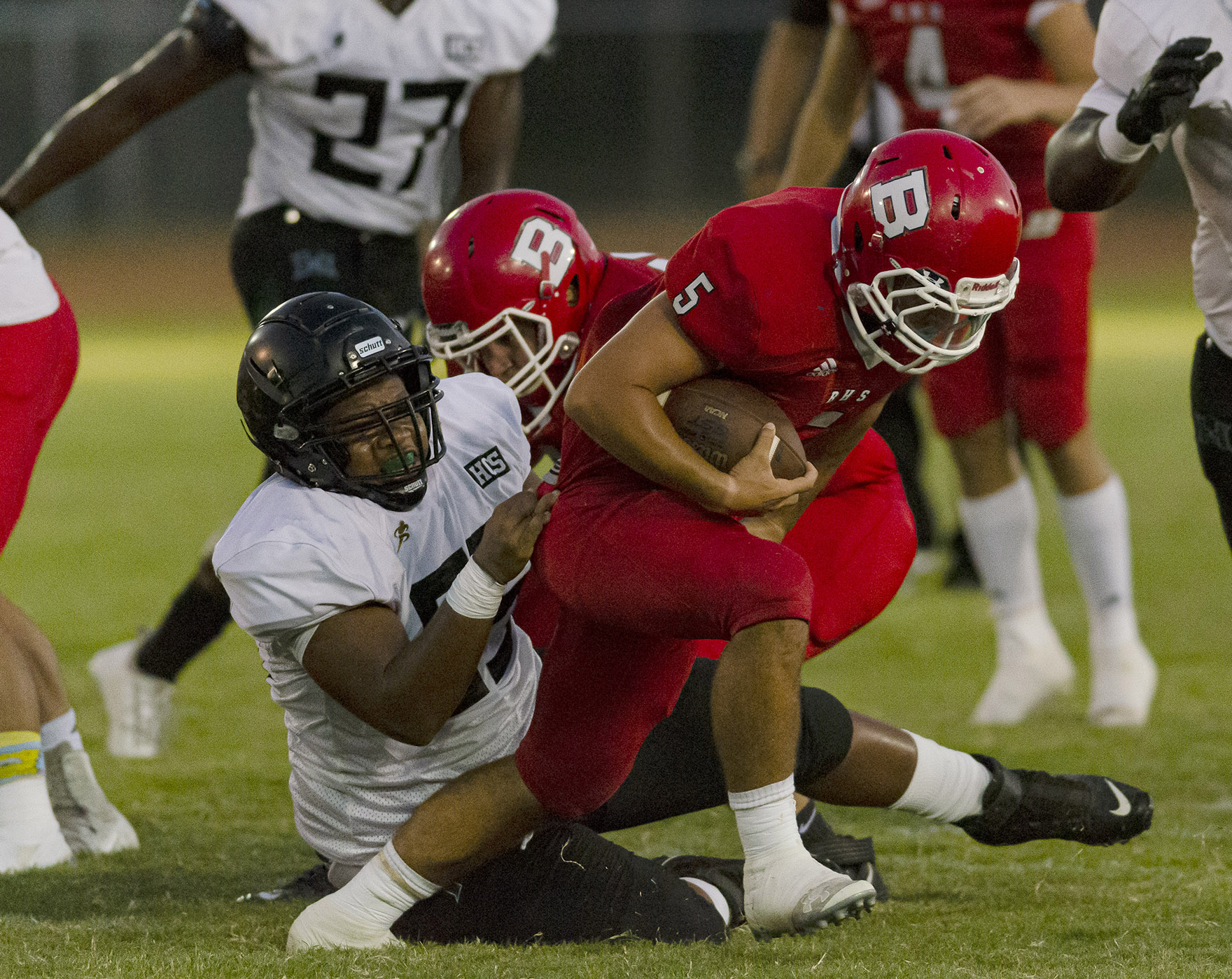 “They don’t quit playing,” Basile head coach Kevin Bertrand said. “It is them (the players). They just did a great job. I would have rather done it in a blowout, but I will take this one too, even though my heart is going crazy right now.”

The Bearcats’ winning drive started on their 15-yard line after stopping the Warriors (1-2, 0-1) on fourth-and-5. Basile held Hamilton scoreless in the second half and 97 total yards after giving up 181 in the first half.

“I thought our coaches did a great job of adjusting on the fly,” Bertrand said. “It is something that we have been trying to work on all week.

“We kind of went back to what we do, and it ended up working a little bit better for us as far as slowing the run down. You could tell (Hamilton) had really committed to running the ball.”

Basile converted three times on fourth down on its final drive, including a 10-yard run by Ethan Bazinet with 1:01 left to get to the Warriors’ 15-yard line. Johnson spiked the ball on second down and Horace Edwards ran for a yard. Time almost ran out, but Johnson was able to get the Bearcats lined up for one last play.

“We actually called a couple of plays in the huddle so we knew what we were doing,” Bertrand said. “It just worked out.

“It was maybe our second or third pass attempt of the game. I don’t think (the Warriors) were really expecting us to run another play and we caught them off guard.”

Hamilton lost its second consecutive game since opening the season with a win over Highland Baptist.

“I thought our defense played as hard as they could play. Fourth down, no timeouts and four seconds left, and they throw a touchdown pass on a slant pass. When does that happen? Lady luck just wasn’t for us tonight. Our kids fought. It was a great 4-1A district ballgame. This is what you expect in District 4-1A football.”

Basile’s Ashton Deaville picked off a pass with 2:45 left in the third quarter with the Bearcats down 26-21. But the Warriors returned the favor when Derrick Williams ripped the ball loose and recovered it at the Warriors’ 6-yard line.

Hamilton rode the legs of senior Logan Richard in the first half. He scored twice, including a 28-yard run set up by a fumble recovery by Kylan Alexander that put the Warriors up 26-7 with 7:01 left in the second quarter. Richard ran for 122 yards after being pressed into service because starter Ze’beian Doffney went down with an injury during the week, Washington said.

Basile’s comeback started in the second half when Bazinet scored on a 20-yard run. Edwards cut the deficit to five points with 4:48 left in the third quarter on a 24-yard run after running around the right end and cutting back to his left. Bazinet led the Bearcats ground game with 126 yards on 18 carries, and Edwards added 85 on 16 carries.