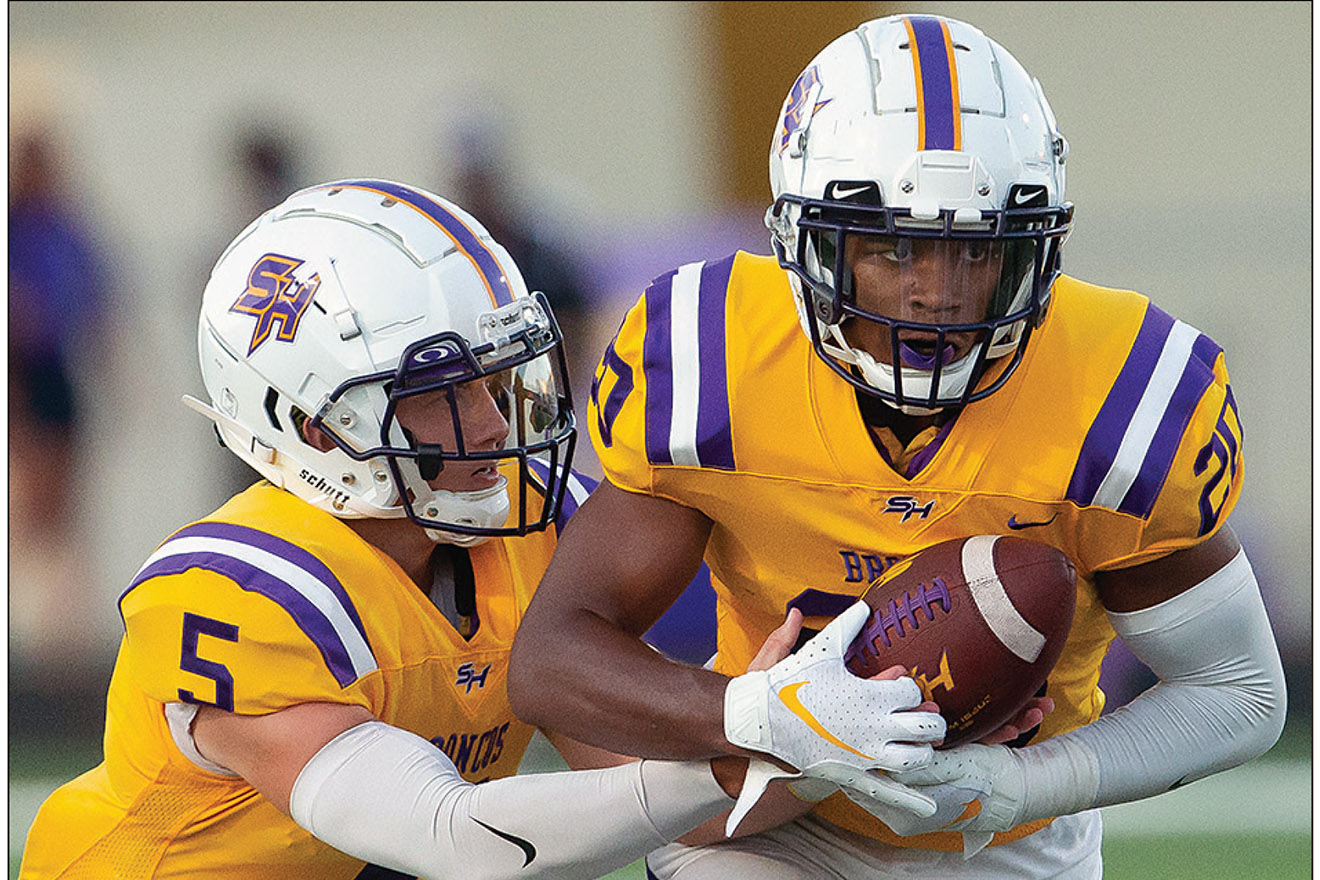 Sam Houston quarterback Andrew Glass hands off to Dennis Gardere during their Sept . 9 game against LaGrange in Moss Bluff . The Broncos were idle in Week 3 and used the extra time to prepare younger players for Friday’s District 3-5A opener against New Iberia. (Rick Hickman / American Press)

Sam Houston sat idle in Week 3, but it wasn’t time for a vacation. Instead, the Broncos took advantage of the extra time to get ready for their District 3-5A opener.

“We tried to scrimmage a little bit just to keep game speed and give our guys live reps,” Sam Houston head coach Chad Davis said. “We are staying aggressive and trying to get some young guys ready.”

“They are 0-3 right now, but they are a scrappy football team,” Davis said of the Yellow Jackets. “They have good size and are well coached. We just have to come out early, come out hot and see what happens.”

The Yellow Jackets offense centers around the ground game and backs Cedric Moore and Courtland Blake. Sam Houston held LaGrange to under 100 yards rushing in Week 2.

“The keys for us is coming out and playing physical with nothing to lose and play with the attitude we have had in practice the last few days,” Davis said. “We should have some success.

“All we have been preaching to these kids is leave everything you got out there. If they give every effort all four quarters, we will live with the outcome.”

Davis said the extra prep time was a plus for the Broncos because of a lineup shuffle on the offensive side. Freshman Gavin Stout will start at quarterback while twin Ty Stout will join the receivers corps. But Davis says he has confidence in the twins.

“That is two key areas,” Davis said. “Defensively we are fine. We just have young guys on the offensive side. We are trying to get them up to speed.

“They are great,” Davis said of the twins. “They are both competitors and are going to be very talented kids. I am hoping we don’t skip a beat. They have worked real hard and hopefully we have some good things come out of it. We are trying to get those guys comfortable in what their role is. We have to throw some kids to the wolves. It is only going to make us better.”

Barbe is looking to end a two-game losing streak and will play Southside tonight at Teurlings Catholic.

Barbe has one of the area’s top passing combinations in quarterback Will McClain (789 yds., 9 TDs) and receiver Jamaal Levi (591 yds., 9 TDs).

The Tors will face defending Class 5A state champion Acadiana on Friday.

While the Rams have lost back-to-back games, their defense is possibly one of the best in the state, limiting three top-10 teams to an average of 13.7 points a game. The Tors didn’t turn over the ball last week and will need a repeat performance to keep the Rams’ defense from taking control.

W-M riding Paul to perfection, St. Louis out to…