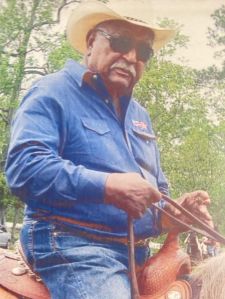 Philip James Victorian, 84, of Lake Charles went to be with his Lord and Savior on Sept. 10, 2021, surrounded by his loving family at home. Visitation will be Friday, Sept.  24, from 5 p.m.– 8 p.m. at Combre Funeral Home. Funeral Service will be Saturday, Sept. 25 with a viewing from 10 a.m. – 12:30 p.m. at Combre Funeral with Funeral Services at 1 p.m. at Immaculate Heart of Mary Catholic Church. The Rev. Wayne LeBleu will be the officiant.

Philip was born in Soileau, La. on Jan. 10, 1937, to the late Louis Edwin Victorian and Eugenia Lawrence (Leday) Victorian. He married Theresa Mae Gradney on Aug. 18, 1956 and was blessed in this union with six children.

He leaves to morn 16 grandchildren, 24 great grandchildren, God-children, cousins, nieces, nephews, and all those that came in as friends which are now family.

Philip was a proud cowboy, father, grandfather and so many more titles. He loved to talk about his family and his Creole traditions, often speaking in the Creole language. He treasured his children and guided them with an unyielding hand and raised them to have a strong work ethic just as he did. Philip loved to cook and entertain, feeding everyone. He was an open and honestman that never met a stranger. He will be dearly missed by all who knew him, may he rest in peace.