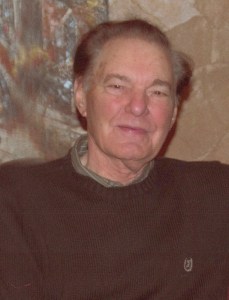 Barnie Floyd Robertson, 95, husband of Emma Lou Robertson, passed peacefully into his heavenly home in the arms of his loving wife of 70 years, surrounded by his family.

He was born and raised in Peason, La., to Ora and Ettie Belle Robertson.     Barnie attended Peason High School, then proudly served his beloved country as a World War II Veteran in the U.S. Navy as a Navy Seaman 1st Class from 1944 – 1946.   After his service, he relocated to Lake Charles where he went to work at Cit-Con/Cities Service.  He worked as an auto mechanic supervisor where he retired in 1981 after 31 years.

Barnie will be fondly remembered by his family and friends as a loving husband, father and grandfather spending time at his farm raising goats, geese, ducks and anything else that happened to wander in needing TLC.   He mastered the art of what he called “temporary hookups” for the solution of every broken thing using duct tape, wire and a little JB Weld.   He will also be remembered for his colorful stories and sense of humor.

Barnie was a member of the Civil Air Patrol in LC where he was a pilot and loved flying his own Cessna plane.   Later in his years, he owned and operated his own Cities Service, service station in Westpoint Shopping Center.    He loved working on motors but especially vehicles and there were always 1 or 2 extra vehicles in the carport he was working on.    He busied himself tinkering and piddling around the house, in the yard, at his farm and in his garage and shop.

He was a member of First Baptist Church in Sulphur.

The family would like to thank Amedysis Hospice including his granddaughter Stephanie Simon, and Jessica and Teresa for their tender care in the past 2 months.

He is preceded in death by his parents, 3 brothers and 3 sisters, son-in-law Charles Bertrand and granddaughter Sarah Alyse Bertrand.

Words of comfort to the family may be expressed at www.robisonfuneralhome.com.

In lieu of flowers, donations may be made in his memory to swlavets.com.   This organization supports our local vets here in Southwest Louisiana.