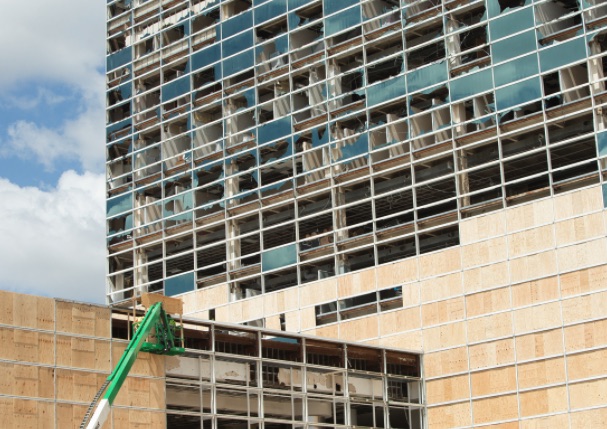 A panel of state lawmakers heard from local officials of the lingering recovery Southwest Louisiana residents and business owners continue to grapple with more than a year after the Category 4 Hurricane Laura’s destructive landfall.

During a meeting Monday at the Capitol in Baton Rouge, the Joint Legislative Commerce Committee heard from Lake Charles Mayor Nic Hunter and Jeremy Stine, president of the Alliance for Positive Growth. The meeting was originally scheduled to discuss recovery from Hurricane Laura, but it was rescheduled following Hurricane Ida’s landfall in Southeast Louisiana Aug. 29.

Rep. Ryan Bourriaque, who sits on the committee, spoke of the ongoing challenges the 6,800 residents in Cameron Parish continue to face in its long-term recovery from Hurricanes Laura and Delta. He said Laura’s 150-mile-per-hour winds and 17-foot storm surge caused damages estimated between $8 billion and $12 billion. The Category 2 Hurricane Delta made landfall six weeks after Laura, bringing a 10-foot storm surge and 12-18 inches of rainfall.

“(They) tested a parish’s will for sure,” he said.

No churches have been restored in lower Cameron Parish since Laura’s landfall, he said.

Schools in Cameron Parish have been slow to recover, Bourriaque said. He mentioned his daughter’s middle school basketball team using the cafeteria for games and placing duct tape on the floor for the free throw lines and baselines.

Initial requests made in September and October 2020 for temporary travel trailers to let residents start repairs to their property didn’t get approval from FEMA until April 28, Bourriaque said.

Three months after Laura’s landfall, half of the residential and commercial structures in the parish were at least 50 percent damaged, Bourriaque said. One third of those remaining structures that were still standing were 100 percent destroyed, he said.

Bourriaque said residents in Southeast Louisiana will soon know “all too well” the challenges and frustration when it comes to settling insurance claims after Hurricane Ida, as well as finding a contractor and supplies.

The fact that federal supplemental disaster assistance has yet to be approved by Congress for Hurricanes Laura and Delta is “completely unacceptable,” Bourriaque said. He said Cameron Parish has been invoiced $32 million just for debris collection and disposal. The parish paid out $12 million from its general fund to cover those costs, an amount that has yet to be reimbursed, he said.

Hunter didn’t mince words when giving numbers to the committee related to last year’s hurricanes. He said the Weather Channel in May gave the city the distinction of being America’s most weather-battered city, including Hurricanes Laura and Delta, the February winter storm and the May flooding.

Blighted properties in Lake Charles are up 833 percent compared to pre-Hurricane Laura, he said. Those properties must be demolished, and the city can’t afford that without supplemental disaster assistance, he said.

Twenty-one percent of businesses in Lake Charles did not renew their occupational licenses this year, Hunter said. The Calcasieu Parish School Board has a 14 percent decline in enrollment. Sixty percent of public housing remains offline, he said.

While Hunter said he is confident the local economy will rebound from last year’s hurricanes, the big question involves neighborhoods that were already vulnerable before Hurricane Laura’s landfall.

“When you drive around the city, you see whole blocks that have not been touched since Hurricane Laura,” he said.

Hunter said the entire Louisiana coastline is in need of assistance, but he asked the committee that Lake Charles and Southwest Louisiana not be forgotten.

Sen. Rick Ward, R-Port Allen, asked Hunter if any of the federal delegation has explained why Congress has yet to approve supplemental disaster recovery funds. Hunter said the federal delegation has blamed it on the current polarization of Washington D.C. politics. Hunter added that Hurricane Ida’s landfall elevated the conversation for getting that assistance approved, but he added “there should be a lot less politics involved in disaster recovery.”

Stine said it’s traumatizing to see what local neighborhoods endured after Laura. He said insurance companies continue to give residents the runaround and mentioned some residents who have yet to return, more than a year after the storms.

Jim Campbell, vice president of state and local government affairs for the cable and internet provider Suddenlink, said the company has spent more than $150 million to replace and upgrade large portions of its network that were damaged by Hurricane Laura. Right after Laura’s landfall, 85 percent of the subscriber base in Louisiana was offline, he said.

Campbell acknowledged Suddenlink’s lackluster customer response in Laura’s immediate aftermath. The company was highly criticized by customers and local officials for not responding quickly in the days and weeks after Hurricane Laura.

Campbelll said Hurricane Ida didn’t strike the Suddenlink network as directly as Laura did, with less than 1 percent of the subscriber base being offline after the storm.

Ward said the Legislature will continue to work with Southwest Louisiana, adding that federal lawmakers can hopefully “get their act together and do what they need to do for us here in Louisiana.”

Nonprofit director to retire: Hickman has worked for BArc…