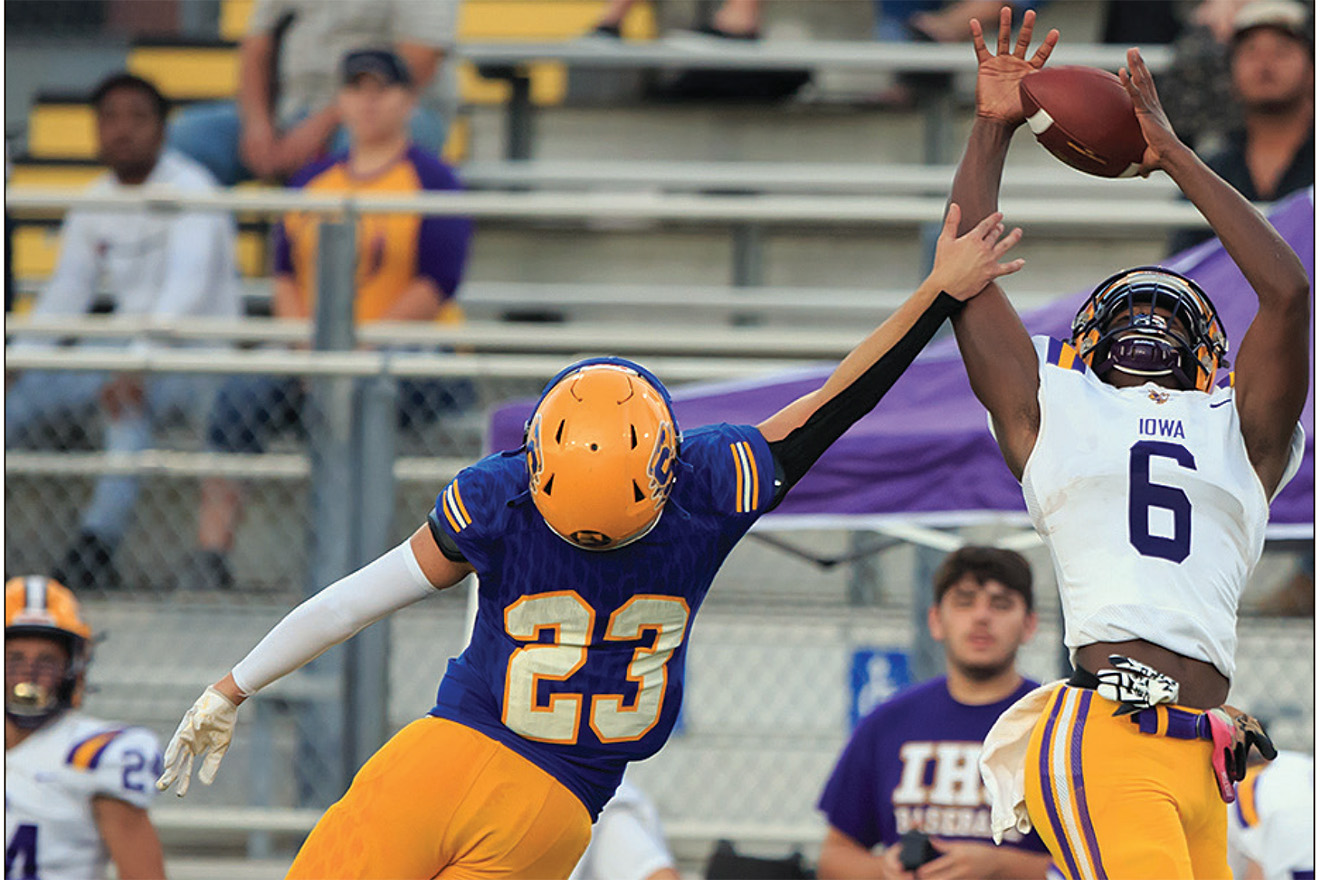 “It is kind of the same situation as last week,” Iowa head coach Tommy Johns said. “It was a close game at the half.

“That is all we have been preaching to these kids: finish, finish, finish. I thought we had a few missed opportunities in the first half, but we were able to capitalize in the second half.”

It was the first win over the Tors (1-2) for the Class 3A Yellow Jackets (3-0) and their first win over a Class 5A program since beating Sam Houston in 2017. Iowa lost to the Tors in 2015 and 2016 after leading at halftime or in the third quarter.

“I thought depth would be a concern,” Johns said. “The way we were able to finish, I am just so proud of these guys.

“Our coaches did a (great) job. I think it is big, but it still

See IOWA, B4 only counts as one (win). We have to keep plugging along and hope we keep stacking wins.”

Deville had 93 yards on the ground and 91 through the air, scoring on a 74-yard reception and 60-yard run, plus an 89-yard punt return.

“Curtis is a difference-maker,” Johns said. “I don’t know what else to say. He does everything for us, and he is a huge asset to our team.

“I think this is a good team win. We blocked well; I thought we executed well. When you do that, plus a dynamic player like him, it is tough to defend.”

Young rushed for 176 yards on 25 carries, scoring twice in the second half on runs of 20 and 56 yards plus a 24-yard score in the first half.

The Tors racked up a season-high 340 yards of offense, and junior quarterback Gage Trahan threw for a career-high 254 yards and two touchdowns. Sulphur recovered a pair of fumbles in the second half, including one in the end zone by Tyler Massey to cut Iowa’s lead to 28-22 with 5:50 left in the third quarter. But the Tors lost their second consecutive game after a forfeit loss to Notre Dame last week.

“Special teams had some snafus. We punted to (Deville) when we were not supposed to. We have to teach these kids how to win. That is the biggest thing. They just have to get better.”

The Sulphur Tors were 3-for-3 in the red zone in the first half and had a chance to pull within two points late in the second quarter. Jonathan Hopkins’ 34-yard catch on third down kept the drive alive, but it stalled at the Yellow Jackets’ 4-yard line. Ethan Paiz kicked a 22-yard field goal to pull the Tors within 21-15.

Sulphur’s Kaden Blalock caught four passes for 137 yards with a 41-yard touchdown in the fourth quarter.

That’s more like it, freshmen WRs get LSU offense…