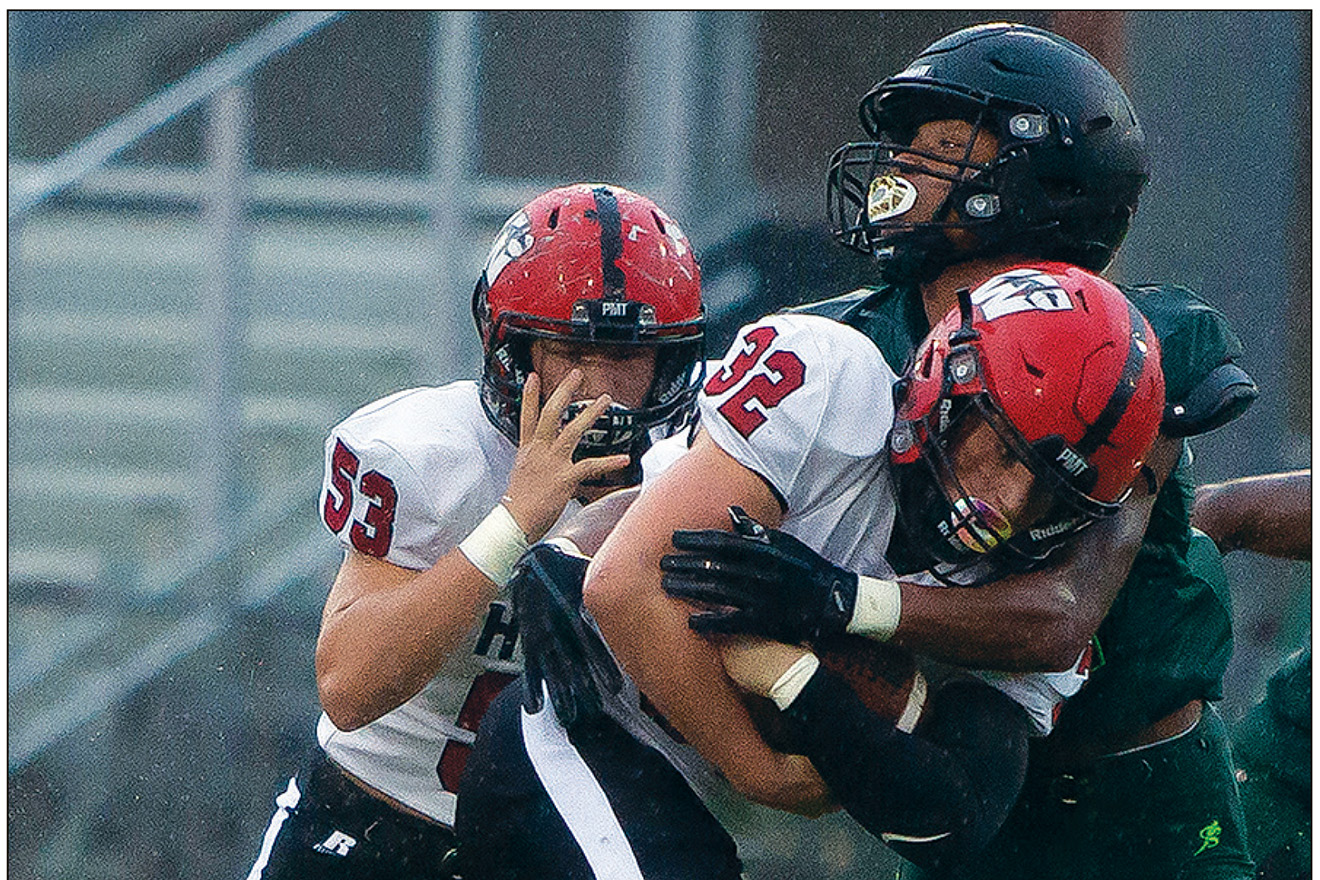 Greyhounds running back Cohen Fontenot carries the ball for a gain against Hamilton Christian during a game Thursday night in Welsh. Fontenot ran for 137 yards. (Rick Hickman / American Press)

WELSH — The Greyhounds turned into mudders when needed, grinding out a 28-14 nondistrict win over Hamilton Christian Thursday night in sloppy playing conditions.

Welsh (2-1) didn’t lose any fumbles and controlled the clock with a steady running game. Cohen Fontenot ran for 137 yards and Gabe Gillet added 82.

“We did a good job of making adjustments on the offensive line,” Welsh head coach Cody Gueringer said. “Then our backs adjusted to how they had to hit the hole. We had to go outside more. We handled the ball well all night and we’re able to play the game on our side of the field.”

The Greyhounds drove 57 yards for a touchdown on the game’s opening drive. All 12 plays were on the ground, with Fontenot scoring on a 5-yard run up the middle.

Welsh extended the lead to 14-0 in the second quarter. After recovering a Hamilton fumble, the Hounds scored from 20 yards out in two plays. Gabe Gillet scored the touchdown on an 18-yard run then connected with Grant Daigle on a 2-point conversion pass.

The Warriors (1-1) were plagued by mistakes, turning the ball over on a bad punt snap, failed fake punt run and through lost fumbles.

Hamilton also had an interception return touchdown and touchdown pass negated by a penalty.

Welsh took a 21-0 lead in the third quarter on a 7-yard touchdown run around right end by Gillet.

Hamilton got on the board 15 seconds into the fourth quarter when Ze’beian Doffney scored from the 1-yard line on fourth-and-goal to cap a seven-play, 57-yard drive.

The Welsh defense scored in the fourth quarter when Hayden Van Ness recovered a backwards pass in the end zone for a touchdown to make the score 28-6.

Doffney scored again from four yards out later in the quarter. Sullen added a 2-point run to make it 28-14.

Sullen threw for 113 yards and ran for 81 to lead the Warriors. Doffney added 68 yards on the ground.