When it comes to headwear, Anne Monlezun and Kevin Mattingly have got you covered 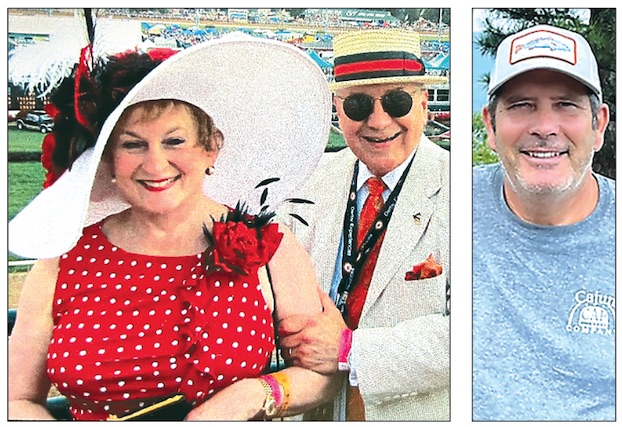 Some people can’t wait to slow down the pace when they reach retirement age, not Anne Monlezun and Kevin Mattingly. She’s opening a boutique to do what she loves and he began his online cap company so he can travel, see more places, meet more people and sell more caps along the way.

Fascinator to the fedora

Sassy Royals Hats and Accessories will open in October. However, Anne Monlezun has been busy in her quest to bring the hat back for the last 10 years by serving the wholesale, costume and custom market.

“I will offer wool felt and straw hats for men and women in every color and style available, plus costume hats,” she said. “I tell everyone this is my retirement job. The truth is, I will always work, and I am never bored. I don’t think I have ever been bored.”

She creates the hats from scratch and has attended millinery training in New Orleans.

Some basic molds may be customized in less time. Some of her one-of-kind hats will be on display and available at time of purchase. Pricing is largely determined by the quantity and quality of the trim requested. For instance, Monlezun can design a hat using affordable silk flowers purchased in bulk or using one-of-a-kind, handcrafted flowers created in New York.

“I can send small remnants of fabric that match the dress to have these flowers made, beautifully coordinating the hat and dress or gown,” she said.

Fabrics, ribbons, feathers and other trim are also available.

Other Sassy Royals Accessories will include various lines from classic and trending fashions to designs from Mary Frances and Lorren Bell. Frances is the celebrated designer who hopes to continue to keep hand workmanship alive. Designs are eclectic, collectible and trend setting.

Monlezun has ordered quite a few and among them are the Mary Frances casino and Kentucky Derby designs. Lorren Bell is known for his jewelry, hair ornaments and handbags, embellished with Swarovski crystals, faux tortoise and cotton ball pearls. Bell, according to Monlezun has a tie with the local Lanza family, owners of Joseph’s Electric.

The 3,000-square foot shop theme will be Victorian mainly because Monlezun had antiques she wanted to use, and the Victorian age was all about the hat.

“These days, women still wear hats to church, teas, and to showers because teas are a trending shower theme, weddings and of course for special events like the Derby for Dollars and Mardi Gras. In the last couple of months, I have had four calls from men so I’ve decided to have one room devoted to men’s hats,” she said.

Monlezun believes the hat can make any woman or man unforgettable, an ideal accessory for a political candidate in particular.

“A hat sets a person apart,” Monlezun said. “Not everyone can pull it off, but when they do, they won’t be forgotten. And a hat is not just a head covering or a fashion accessory. A hat is a conversation starting point,” she said.

Monlezun taught dancing and started out by making headpieces for students’ dance costumes. Her trim company opened up a world of design contacts across the United States, and she is currently working on Victorian Western riding hats to complete an order for a client who has also ordered showgirl headpieces and Marie Antoinette hats.

“I didn’t know exactly what a Marie Antoinette hat was,” Monlezun admitted, “so I did what I do when I need information, I asked my phone.”

What came up was a frilly tricorn. Monlezun already had the tricorn buccaneer in stock. Pirate or buccaneer hat
requests come in from not only Lake Charles but other parts of the U.S. She used one to come up with a white tricorn trimmed in lace and fabric. Monlezun sells Gatsby headbands to a Florida boutique owner trimmed with feathers, rhinestones, crystals and Alencon lace to go with a French 1920s flapper dress styles sold by the boutique owner. She has created costume turbans, and is now working on a turban line for all, including those who want to cover the hair, or the lack of a thick, 20-year-old mane. She’ll use a hairpiece at the crown of these turbans.”

“I have done it all,” Monlezun said, ‘fascinators to fedoras,’ and everything in between. Now’s the season for felt, even though we tend to wear straw a little longer here in the South than in other parts of the country. The wool cloche will look great on most. I can’t wait to bring back the hat.”

When Kevin Mattingly’s wife retired, he was selling advertising at a local news station. She suggested he do something else.

“She wanted us to spend more time together and have more time for travel,” Kevin said. “I always wanted to do something constructive,” Mattingly said, “something with my hands.”

His father and mother, both deaf, modeled an amazing work ethic. His father often worked three jobs. Mattingly thought about raising vegetables for the farmer’s market, but that wouldn’t give him freedom to travel, and he liked selling.

Mattingly sold Bibles and encyclopedias door to door for 14 or 15 hours a day, a summer program for college students that would allow him to make enough for the school year.

For awhile he sold promotional products, which he was familiar with because of his advertising sales career. The company he signed up with had thousands of products.

“It was overwhelming,” he said.

Since he likes hats and always wore one for fishing and gardening, he decided to simplify, limit the items he sells. So, he started Cajun Cap Company, and today he sells mostly caps, but he sells a few other items as well.

“It was easy for Mattingly to talk to the people he meets during his travels and ask them if they have ever thought about putting their logo on a cap.”

According to Mattingly, research shows that a person will keep a cap for 10 months and in that ten months, it’s possible 3,800 people will see the logo. A cap keeps the sun out of a person’s eyes and off his head.

“And I don’t have to wear a tie to do the job,” he said. “Usually I’m in shorts or jeans. I sell at my pleasure and pace. Every cap has a story.”

The latest Cajun Cap design and story is about Mattingly’s fascination with Crystal Beach and a Bolivar Peninnsula artist that impressed him with her desire to refire rather than retire, Patricia Hagstrom.

Mattingly had never visited Crystal Beach and was impressed with the people and the beach.

“You can still camp on the beach, walk your dog, make a fire, sort of an old-timey beach,” he said.

He asked Hagstrom if she’d do the art for the cap, and she agreed. On the side of the cap, he added, ‘Quit Wishin,’ Go Fishin.’

Caps, not a bad retirement gig for a man who wants to stay on the move.

Elizabeth Jimney column: Building a website that works for…