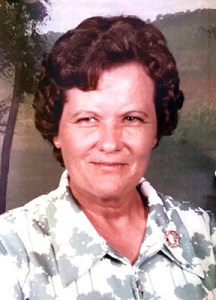 Ruth passed away to be with God and family on September 13, 2021.  She was born on April 30, 1924 in Orange, TX to Henry William and Iva Elizabeth Busby Goss.  She went to Lake Charles High School back when you had to walk to school.  She lived most of her life in Westlake, LA.  She married Jesse Joseph Dupin in 1940, and they had seven children.  She was a devoted wife, mother and homemaker.  She was born with a twin brother, Roland Jasper Goss.  In 1994, she and her husband, Jesse moved to Lake Street in Lake Charles.  About a year ago she moved in with her daughter, Carlyn Fullington in Iowa, LA, where she stayed until her death.

She was preceded in death by her loving husband, Jesse Joseph Dupin; her sons, James Bruce Dupin and Kenneth Wayne Dupin; her daughters, Jessie Mae Pujol, and Patricia Lynn Benoit; and her granddaughter, Laura Michelle Dupin.

Her funeral will be held at 2:00 PM on Saturday, September 18, 2021 at University Baptist Church, located at 4505 Lake Street, Lake Charles, LA 70605.  Rev. Broxie Hardesty will officiate.  Burial will follow in Highland Memory Gardens Cemetery under the direction of Johnson Funeral Home.  Visitation will be at the church on Saturday morning from 10:00 AM until the start of the service.