Nicholas weakening as it moves toward SW La. 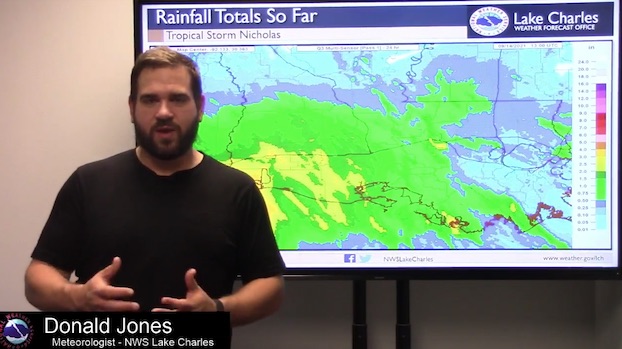 Service’s Lake Charles office, said widespread rainfall will continue across the region today with five to 10 inches of rainfall — and in some areas, 20 inches — possible.

Nicholas rapidly weakened as it made its way over land Tuesday morning, while continuing to cause widespread rainfall over Southwest Louisiana.

Nicholas made landfall as a Category 1 hurricane with maximum sustained winds of 75 mph just after midnight Tuesday near Sargent Beach, Texas.

At its peak, more than 500,000 homes and businesses were without power in southeast Texas — including the Houston area — Tuesday morning, according to poweroutage.us.

The system has now been downgraded to a tropical storm with maximum winds of 45 mph.

Donald Jones, a meteorologist with the National Weather Service’s Lake Charles office, said widespread rainfall will continue across the region today with five to 10 inches of rainfall — and, in some areas, 20 inches — possible.

A flash flooding warning remains in effect for Orange, Texas, Sulphur and Carlyss until 7 p.m.

“Don’t be surprised if we have many more flash flood warnings pop up as the heavy rain bands move through,” he said.

Jones said wind gusts can be expected within the stronger rain bands, but they won’t be strong enough to cause significant damage.

He said the system is expected to slow down to about 3-5 mph as it moves from west to east into Southwest Louisiana and will bring at least another 24 hours of rainfall.

The good news, he said, is there’s not a lot of rain on the west side of the storm that will follow Nicholas after it passes through the region.

“Southwest Louisiana will be on the down trend tomorrow afternoon, but the moisture Nicholas leaves behind will give us pretty high daily chances of rain,” he said. “Areas that experience flash flooding will have the potential for the flash flooding to be made worse because of that.”