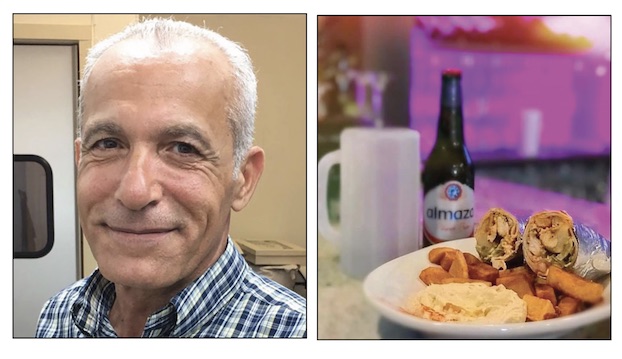 “The food is satisfying. I feel good afterwards, and I can’t say this has been my experience at other restaurants,” Kuschner said. “I’ve never eaten anything there I didn’t like. It’s always good and Jamal is so creative.”

She always starts with a pot of freshly brewed hot tea with a hint of Lebanese rose syrup.

Few things please Chloun more than delighting restaurant patrons with authentic Middle Eastern Cuisine. He admits he’s adapted some of the classics, but he does so sparingly. Loyal patrons are happy to help him decide if the creation is something that will be included on the menu or just a fun and tasty experiment.

The secret behind his success – and likely one of the reasons Kuschner always leaves feeling like she’s had a healthy meal — is that Toga Grill prepares dishes fresh and to order. It’s time consuming, but Chloun says it’s essential. He also uses a vendor who guarantees authentic brands and he sticks to the belief that fresh is best, using the freshest herbs and vegetables.

Most people are aware of the healthy and nutritional advantages of the Mediterranean Diet. That includes Middle Eastern food, including one of the healthiest “fast foods” available, falafel, which is made from chickpeas, fresh herbs and spices.

“Falafel is one of our most popular dishes,” Chloun said. The recipe has been handed down from my father and it’s at least 75 years old.”

Before he opened Toga Grill, he was advised to “commercial-ize, American-iize or Southern-ize” his authentic recipes.

“These are basic foods,” he said, “which may vary slightly from region to region in the same way Louisiana food varies from the coast, Cajun country and other areas. Nevertheless, he is always willing to put a fresh spin on a classic. A couple of weeks ago he launched a kibbeh (usually pronounced Kib-ee) that includes jalapeno and mozzarella cheese. He is still gauging guests’ reaction to decide whether it will win a space on the menu.

He loves introducing folks to Middle Eastern cuisine for the first time.

“I have enjoyed talking to many of my customers who had never tried Lebanese food, or who had tried it at a different restaurant and decided they weren’t crazy about it until they had a certain dish at Toga Grill,” he said. “One man didn’t like cauliflower at all. I cooked some for him during the hurricane and he loves it so much, he wants it with everything.”

Chloun came to Southwest Louisiana from Saida, Lebanon, to get his degree in the restaurant and hotel business then he took his expertise home to help his family business. In 2000, he came back again.

Mazen Hijazi, the owner of Mazen’s gave Chloun his first job as chef.

“We grew up in the same city. I’ve known him a long time,” Chloun said. “I worked there a while.”

“I would like to use this opportunity to thank every customer who has dined with us and the community for standing together and helping one another through the storms,” Chloun said. “Stay strong.”

Who’s your favorite home cook or chef? Call 337-494-4072 or email rita.lebleu@americanpress. We’d like to hear from you and find out why.