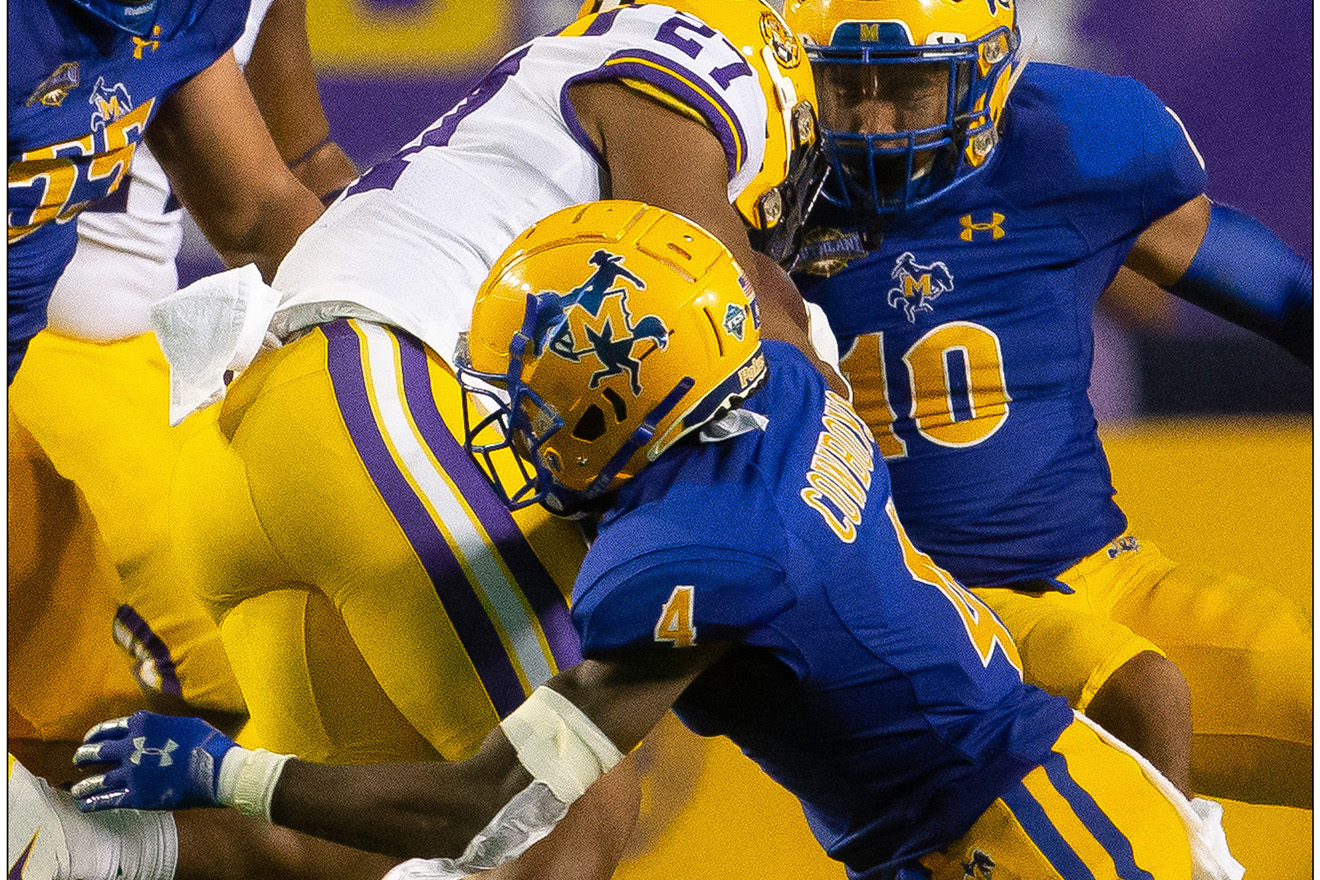 LSU Tigers running back Josh Williams (27) gets brought down by McNeese State Cowboys cornerback Corione Harris (4) during the 1st half of their game at Tiger Stadium Saturday. (Rick Hickman / American Press)

Now that the big payday has passed, it’s time for the Cowboys to get back to work.

With LSU in the rear view mirror, McNeese State finds itself getting ready for a return trip to Baton Rouge this Saturday night.

Instead of heading south once they cross the Mississippi River, this time the Cowboys will head north for a showdown with Southern University. At 0-2 wiggle room is gone as MSU plays a 1-1 Jaguars squad.

“A proud football tradition of championships and winning,” McNeese head coach Frank Wilson said of Southern, which is coming off a 41-24 win over Miles College. “They will be a formidable foe for sure.”

The Cowboys showed they could play above level, falling to LSU 34-7 last weekend in a competitive game. The McNeese defense held the Tigers to just 306 yards of total offense.

McNeese also picked up a record $600,000 for their troubles.

“That proved we can compete with anybody,” said defensive back Corione Harris. “It was a great opportunity to play in that big stadium.”

The Cowboys will find themselves in a different type of atmosphere in Mumford Stadium. The famous Southern band will lead a smaller but noise crowd that will that will be ready for an in-state opponent.

“This is a game we are capable of winning,” said Wilson. “It won’t be given to us, but I like this football team and where we are at.”

This is the last game before McNeese opens Southland Conference play the following week at Incarnate Word.

“It’s a big week for us to get back on track,” said quarterback Cody Orgeron. “Moral is high. We want to fix our miscues and we will be fine.”

Southern will be the first Football Championship Subdivision foe the Cowboys will face this year, giving them a more accurate indication as to where they stand.

“It will be good to be back playing on our level of competition,” said Orgeron. “We got to see where we stand against an elite program. We have shown flashes now we want to put a solid game together.”

Wilson will get to see how some of his former assistants are doing Saturday. Three of his coaches at Texas-San Antonio are now at Southern, including Jason Rollins, the Jaguars head coach. Rollins, a former McNeese assistant, was Wilson’s defensive coordinator at UTSA.

“He (Rollins) has a bright mind and a great human being,” said Wilson. “He has worked his way up from the bottom. He will have Southern going in the right direction.”

Southern is also the first team McNeese will have played that also had a spring season. LSU played in the fall while West Florida opted out of the the fall and spring seasons due to COVID concerns.

As for the Cowboys, they will once again be without speedy wide receiver Cee Jay Powell, who left the opener early with an injury.

That hurt against LSU as his deep threat was lost and the Tigers were able to condense the field, sacking Orgeron eight times.

McNeese did find a kicker, sort of. Nolan Heitmeier made the Cowboys only kick try Saturday, an extra point. McNeese missed three of those and a field goal in the opener, leading to a 42-36 loss to UWF.

When asked what he learned from playing LSU, Wilson smiled and said; “that we can kick an extra point.”

He also said tryouts for field goals will continue this week.

“We will continue to look for consistency there,” Wilson said. “The problem is they make them in practice.”

Wilson will have his eyes on the sky this week as he tries to dodge rain drops and get in a full week of practice. McNeese doesn’t have a true indoor facility to practice in when it rains.

“It is something we have been looking at,” said Wilson. “It would be great to have, but we can only control what we can control.”

Earlier Monday, Athletic Director Heath Schroyer confirmed that he is hoping to get the Cowboys back on the LSU schedule as quick as possible.

“It was great for the program and our school to play LSU,” Schroyer said.

And it wasn’t bad for the McNeese bank account either.

Maybe next time the money can go to build an indoor practice facility.