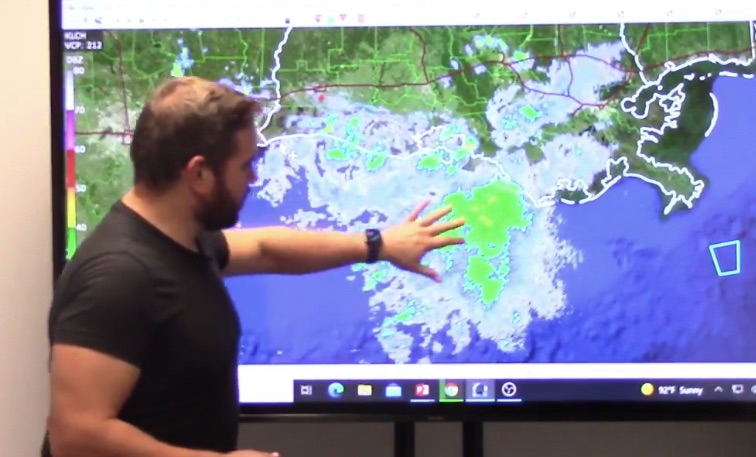 Donald Jones, a meteorologist with the National Weather Service’s Lake Charles office, said Nicholas is continuing to slowly organize in the Gulf of Mexico with maximum winds near 40 mph.

All Calcasieu Parish public schools  — as well as the charter schools and Bishop Noland — are closed Monday due to Tropical Storm Nicholas and the risk of flash flooding in parts of the parish.

“We feel this decision is in the best interest of students, faculty and staff and was made after consulting with local emergency officials and meteorologists,” Holly Holland, spokesperson for the Calcasieu Parish School Board, said. She said families will be notified later today of the status of school on Tuesday.

“Please stay safe during this time, and we look forward to welcoming everyone back to our campuses soon,” she said.

Donald Jones, a meteorologist with the National Weather Service’s Lake Charles office, said Nicholas is continuing to organize in the Gulf of Mexico with winds near 40 mph.

“Steady intensification is expected overnight and over the next couple of days until the storm makes landfall,” Jones said.

Jones said Nicholas is expected to move north near the Mexico-Texas border over the next three days with a landfall expected somewhere along the central Texas coastline early Tuesday.

Jones said the longer Nicholas stays out over the Gulf of Mexico, the more opportunity it will have to strengthen.

“The biggest threat for our area by far will be the potential for rainfall, regardless of development.”

He said the area could expect 5-10 inches of rain with some pockets of the area facing a potential 25 inches.

“This will lead to street flooding and if it’s anywhere near the possible 25 inches, we will see water in homes,” he said. “Winds will be dependent on the strength of the storm, but what we’re really facing is the rain.”

He said the storm is expected to slow as it moves inland, which will create continuous rainband threats.

“That’s when those rainfall totals are really going to build up,” he said.

He said Southwest Louisiana has about a 30 percent chance of experiencing tropical storm-force winds Monday night into Tuesday morning.

Tides will run 1 to 2 feet above normal in the region.

Calcasieu: While the sand and bags are provided, residents must bring their own shovels and fill their own bags. These facilities are not staffed with personnel.

Jeff Davis: Sand and sandbags will be available at the following locations. Residents should bring their own shovel.

Beauregard: Sandbags will be available 7 a.m.-5:30 p.m. Monday for city of DeRidder residents at the City Shop, at 735 West 7th St. Bring a shovel. Limit 10 bags per household.