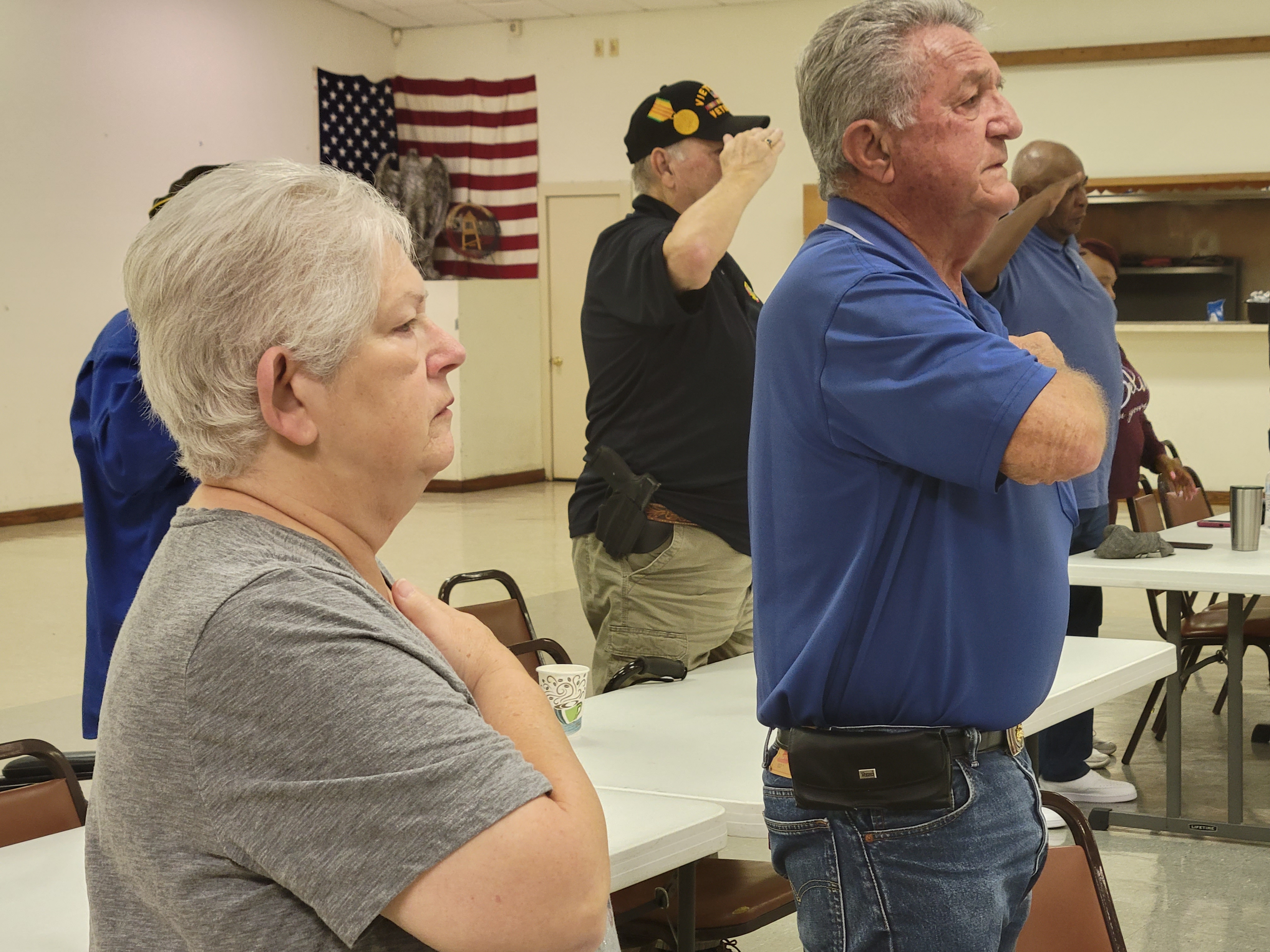 Sandy and Richard Morgan salute the flag and pay tribute to lives lost during 9/11 and honor emergency responders at Vinton's Day of Remembrance Saturday at the Vinton VFW Post 9854. (Rita LeBleu / American Press)

At 7:46 a.m., a bell rang out at the Patriot Day Ceremony held Saturday, Sept. 11, at the Veterans of Foreign Wars Post 9854 in Vinton. That is the time that Flight 11 crashed into the north face of the North Tower of the World Trade Center (central time) 20 years ago.

Sandy Morgan recalled she was giving a special test when she began to see people rushing to the counselor’s office. When the test was over, she went to that office where other staffers were watching the events unfold on TV. She immediately called her husband, Richard.

“Since that time, a portion of that educational test kit has changed,” she said. “They took out the illustration of the airplane nearing a skyscraper. I can’t remember exactly how the illustration was used in the test, only that it’s not in that Johnson’s Educational Test Kit any longer.”

“Nothing would ever be the same after that day,” said Robert LeBlanc, “and our airport security is just one reminder of that.”

Lawrence told the story of the heroism of passengers on Flight 93 who were able to stop the hijacked flight from reaching its intended target, possibly the White House, Camp David or a nearby nuclear plant, he said.

“The passengers on Flight 93 were getting phone calls and learning about the first two attacks,” Lawrence said.

The passengers and crew took a vote and decided to fight back.

“Tom Burnett was on that flight. He told his wife that he and the others were going to do something about it,” Lawrence said. “And ‘Let’s roll,’ the last words spoken by Todd Beamer, have become a rallying cry spoken by a man who realized he could die, or die fighting.”

The meeting ended with a standing salute to the American Flag as Robert LeBlanc played “Taps.”  Invitations were extended to all present and the public for two upcoming events. A POW/MIA ceremony will be held at 10 a.m. Friday, Sept. 17. More than 83,000 service men and women are still missing. Lunch will be provided. On Monday, Sept. 27, area first responders will be feted with a banquet at 6 p.m.