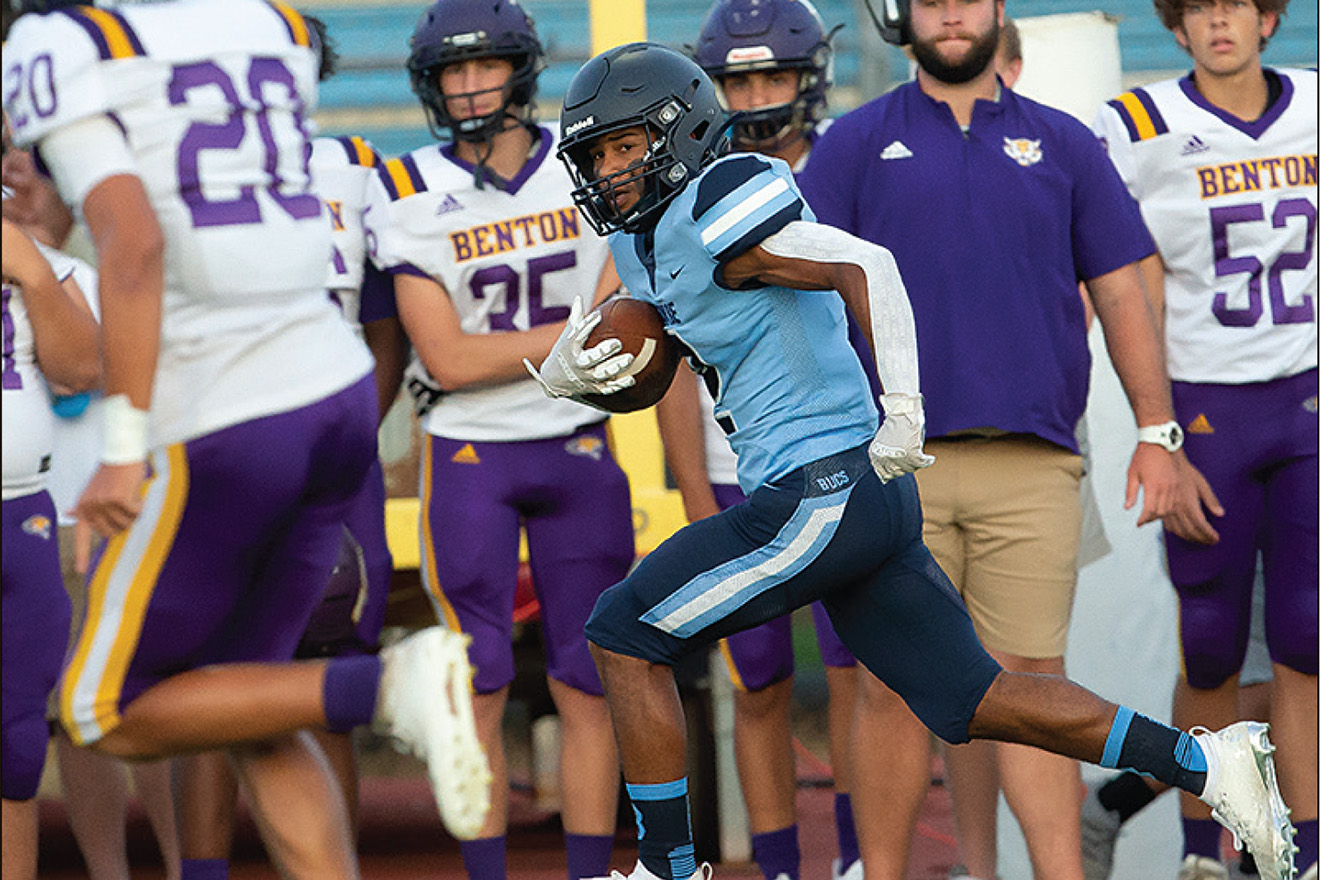 The Bucs’ Jamaal Levi carries the ball for a touchdown after making a reception against Benton Friday night at at Barbe High School. (Rick Hickman / American Press)

The lights came back, but the Bucs did not as Benton ran away with a 49-40 nondistrict win over Barbe Friday night at Buccaneers Stadium

Before the portable lights went out early in the second quarter, the scoreboard was under threat after a deluge of first-quarter touchdowns. At one point, three touchdowns were scored in 59 seconds.

Benton led 21-13 at the end of the quarter, getting touchdowns on a 6-yard run by Greg Manning and Gray Walters touchdown passes of 72 yards to Pearce Russell and 45 yards to R.J. Moore.

The offensive onslaught continued in the second quarter. Barbe scored on passes of 10 and 68 yards from McClain to Levi. Benton scored on a 10-yard run by Walters, 19-yard pass from Walters to Cade Stewart and a 41-yard pass from Jeffrey King to Russell on a trick play, a wide receiver pass.

The teams combined for 510 passing yards in the first half. Levi had six receptions for 199 yards and three touchdowns. McClain threw for 283 yards in the half.

Benton scored on all but its first possession, which featured a 65-yard touchdown pass called back on penalty.

The Tigers had 350 yards of offense in the first half.

Benton took control with a 14-play touchdown drive to start the second half, capped by a 2-yard touchdown run by Landon Duggan. Barbe pulled within nine on a pair of fourth-down touchdowns — a McClain 9-yard run and 75-yard pass from McClain to Levi — but missed on a 2-point conversion with 3:45 left and never had the ball again.

“They were moving the ball real well, running their offense and were able to both run it and throw it,” Barbe head coach Mike Cutrera said. “We just couldn’t make a stop. They did a good job of clock management and limited our possessions on offense.”

Most of Barbe’s possessions ended with big plays by Levi, who finished with nine catches for 287 yards and five total touchdowns.

“He is a special kid, a great kid, a competitor who loves playing the game,” Cutrera said.

Cutrera said the game against a quality opponent will be a learning experience for his young team.

“Each game for our guys is going to be a good experience,” he said. “Hopefully we will grow up pretty fast because our district is pretty tough.”