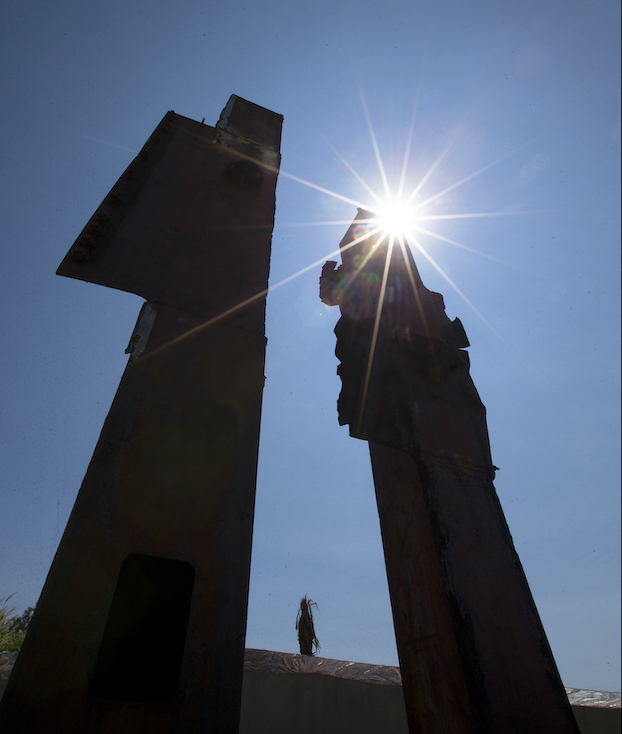 After the Sept. 11, 2001, attacks, Lake Charles acquired two World Trade Center beams and one slab of Pentagon limestone from the U.S. government to build this memorial on the lakefront as a serene setting for meditation and reflection. It pays tribute to the lives lost and a testimony to America’s strength in adversity. (Rick Hickman / American Press)

To mark the 20th anniversary of the terrorist attacks on Sept. 11, 2001, we asked readers to share their stories — where they were, what they remember and how the events of that day changed their lives.

We’ve all been touched by the tragedy — in some way. Some of us watched it unfold on television, some saw the events firsthand and others lost loved ones. If you’re old enough, you know that after the shocking assassination of President John F. Kennedy in 1963 everyone remembered exactly what they were doing at the moment they heard the news. The same with the 1941 bombing of Pearl Harbor.

Tanya Crabtree Welch, formerly of Lake Charles and now a Fields resident, said she was in Boston attending meetings and had been scheduled to fly out of Logan Airport at 2 p.m. that day.

That flight “definitely didn’t happen, but we made the long trek by car to Southwest Louisiana with a couple of co-workers from Virginia Beach and Charlotte, N.C.,” she said. “Physically seeing the Pentagon at 4 a.m. on 4/13 as we passed by with the spotlights and large American flag draped at the point of impact made it ‘real’ for me. America was truly at war with those who wish to do us harm.”

She said about two weeks later, she flew back into Logan Airport “with a sense that I would not let terrorism define or limit my American freedoms.”

Joy Bailey of Leesville said she was getting ready to take her now 21-year-old son to the doctor to get his then 1-year-old shots when she heard the news.

Anne Graves was teaching a human anatomy lab at McNeese State University when she found out.

“What a shock to hear about it,” she said.

Michelle Trahan of Jennings was a fifth-grader in her homeroom class the morning of Sept. 11.

“As soon as it happened the teachers turned on the TVs and we all sat in silence — students and teachers,” she said.

Louise Walsh said Sept. 11 is a day she will “never forget.”

“I was working at the Calcasieu Parish School special education office in Mossville when someone came in and said a plane hit the Trade Center,” she said. “We had a TV in the conference room and we all watched in horror as the second plane hit.”

Ted Perrodin was running late for class at McNeese that morning because he couldn’t break himself away from a radio broadcast covering the news.

“I was listening to the radio — 94.1 in Beaumont — and on the morning show they were announcing the first one … but, kept going … then when they said a second plane hit, I knew this was terror and things would be different after that day.”

Lora DeVille of Moss Bluff was a senior at Sam Houston High School when she heard the news.

“It was my senior year of high school and I was making announcements over the intercom when we saw it on TV.”

“I had just landed in Portland, Ore., after being in New Jersey and New York for three weeks,” Hansen said. “In fact, 24 hours before the towers fell I was on a ferry looking at the towers.”

“I was delivering pizza for Papa John’s,” he said. “I remember doing over 60 runs that day because all the businesses were closing down that day and everyone wanted to sit in front of their TVs and eat pizza.”

Darlene Mallet said it was difficult for her to concentrate that day while delivering packages for UPS.

“I was delivering packages all day wondering what was going on,” Mallet said. “Every stop I had, there was a TV on so I was able to keep up with the news. Very sad day trying to work and crying in between” deliveries.

Dustin Brown was stationed aboard the USS De Wert, which was in port in Mayport, Fla., at the time.

“We heard news of the first plane hitting the north tower and we turned on the news and watched as the second plane hit the south tower,” he said. “Not long after the second plane hit the south tower, we were getting prepared to get underway as we didn’t have any idea what was the next target. As a radioman it was an extremely memorable day listening to all the radio communications. Still gives me the chills reliving that day.”

The attacks also hit close to home for Kay Krausman, who at the time worked for Avis Car Rental.

“When flights started to cancel, everyone was watching the TV monitor in absolute horror,” she recalled. “One of our renters had a son in the Pentagon area and he was not able to get a hold of him. Being a parent, I could only imagine what was going through his thoughts. Thank God his son was found to be safe.”

Alie DesOrmeaux of Lake Charles was 22 and working the early morning shift at JcPenney in Okemos, Mich.

“A customer came up to my sales counter and asked if I’d heard about the plane that hit the World Trade center buildings,” DesOrmeaux said. “I had no idea what she was talking about so I ran up to the break room to find a group of people gathered around the TV as it unfolded. I slept on the couch that night, glued to the TV. I’ll never forget that day.”

Julie Williamson was a seventh-grader at Maplewood Middle when she heard.

“My English teacher came running into the classroom to tell us that a plane had hit one of the towers in New York,” she said. “We didn’t have a TV in the classroom so we watched the tragic events unfold on the math teacher’s computer. After school I sat in front of the TV and cried. To this day I still cry when I think of 9/11.”

Clomart Terro was in the Army when he heard the news.

Julie Jesse was sitting on a beach in Nerja, Southern Spain, when the attacks happened.

“Everyone just left,” she recalled. “It was eerily quiet as no one was speaking. We followed into a bar where we saw the horror unfolding on a TV screen.”

“We lived in Bossier City, where the president was flown to in order to give the state of the union address, once they found out what had happened,” Lynn said. “Because we lived so close to the Air Force base, the schools were out on lock-down, and we could only get our children once we were vetted and verified to be their parents.

“As a family, we were extremely upset, scared and spent her first birthday as a teenager, praying for those poor souls who perished that day,” she said. “I told my daughter, that she was evidence that even in tragedy, there is hope. Her birthday will forever be remembered for that tragic day, but her life has been in service and today she works in New York City, not far from where the towers stood. We will never forget.”

Sept. 11 is a day Sandra Lung Abla will never forget.

“I had just got to work at a casino,” she said. “I walked in and people were silently crying and quietly saying we are at war in America. There was a display of TVs in a circular middle of the main floor. Everyone was gathering around them. You could hear a pin drop in there, which is usually one of the noisiest places there is except for a few slots in the back of the casino that wasn’t aware yet.”

Abla said for the next two years, the casino would announce a moment of silence each anniversary.

“What’s a shame is that stopped,” she said. “That should never have stopped. I was so shaken up. I knew the world would never be the same again. Very disturbing day and to this day I get chills and cry thinking of it.”

Sondra Guillory Tyler was at work at Citgo when she heard.

“I was scared to death that they would blow the plants up and bring the whole country to a stand still,” Guillory said. “It was awful to watch the plane flying into the Twin Towers, the Pentagon and going down in the field. The loss of those lives was felt heavily on everyone in this country’s hearts. I can’t even imagine what the families of those lost were feeling. It was a very sad and scary time.”

Fanetta Keener had just dropped her children off at school when she heard.

“On my way back home, I heard it on the radio,” she said. “I rushed home to call my husband and found out he was in Pennsylvania. Not too long after is when the plane crashed in Pennsylvania. Needless to say I was on the floor by this time crying and praying. I’ll never forget.”

Firefighter David May of Lacassine was driving home from work listening to the radio.

“I remember hearing a news break on the station then they announced what had happened,” May said. “I thought it was a joke at first then my heart sunk when I heard of the second plane hitting. I will always remember that day.”

Summer Nicole LeJeune was a sophomore in high school that day.

“My homeroom class was in the home economics classroom so my teacher had a TV with cable,” she recalled. “We were all talking and my teacher, Mrs. Bordelon, said, ‘Oh my God!’

“We all turned our heads quickly to watch the newscast and we were sad for those passengers and people in the building,” she said. “Then the second plane hit and we then became afraid, as well. It was then that we knew this was no accident.”

She said when the bell rang for students to switch to their next class, no one moved.

“We all suddenly felt violated and unsafe. We did eventually exchange classes throughout the day but every single class had the monitors tuned into Channel One (a school broadcast station),” she said.” It’s a day I’ll never forget and one that will always be a part of me. It is part of the reason I am so passionate about America to this day.”