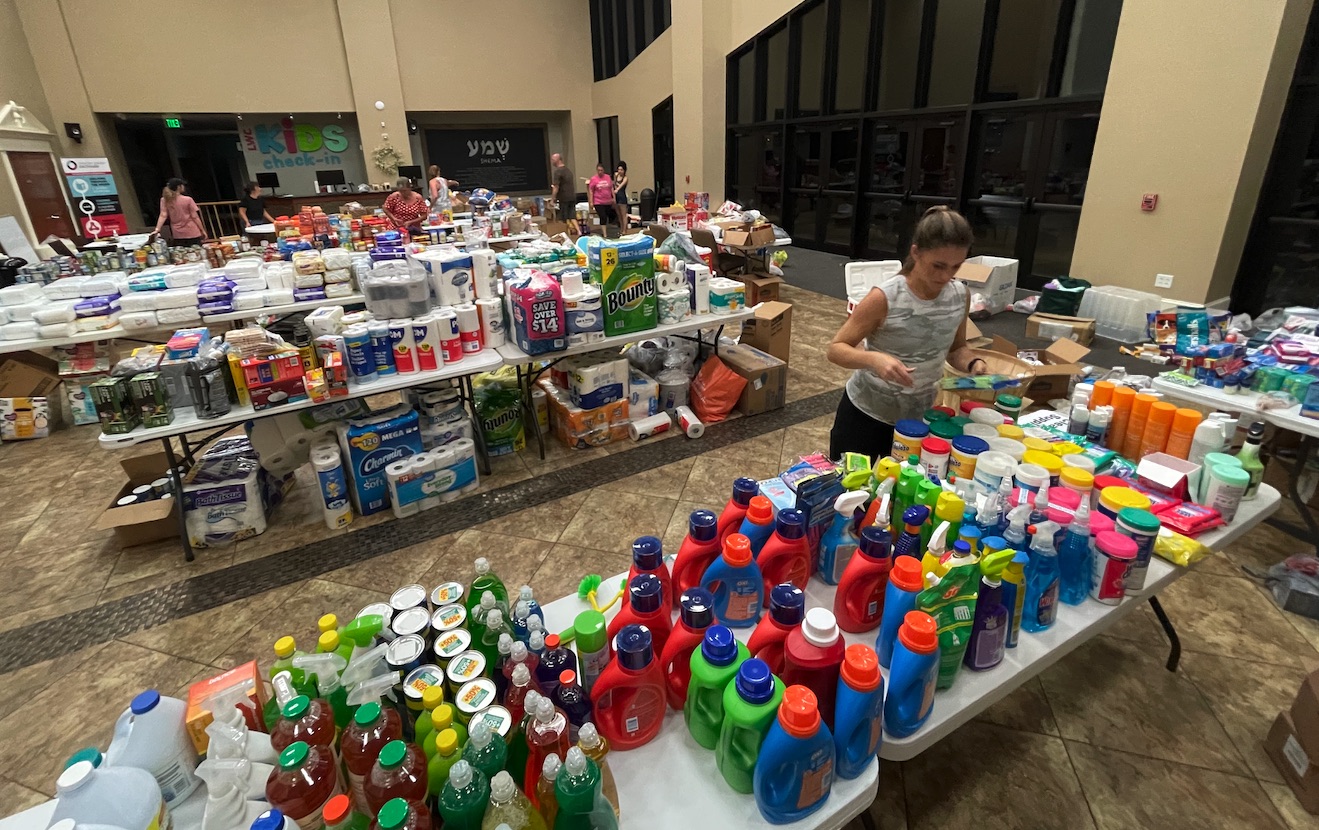 Donated items to be shipped to aid victims of Hurricane Ida in Southeast Louisiana. (Special to the American Press)

A group made up of business owners in Lake Charles, Natchitoches and Southeast Texas banded together to provide roughly 10,000 hot meals to Hurricane Ida victims within days of the Category 4 storm’s landfall Aug. 29.

Frank Randazzo, who owns restaurants in Lake Charles and Southeast Texas, his wife Stefanie, along with the owners of Gator Country — an alligator adventure park with locations in Natchitoches and Beaumont, Texas — spent two days putting the effort together.

Randazzo said he wanted a church in an outlying area to set up their base. It took more than eight hours for the crew to arrive Aug. 31 at Living Word Church in Schriever, a small town less than 15 miles north of Houma, a city in Terrebonne Parish that was left devastated by Ida. Outfitted with a camper trailer, along with supply and food trailers, they came ready to work.

Randazzo said he understands the importance of being first to show up in disaster-affected areas, especially smaller, economically-challenged towns. He described the feeding effort as a food depot that communities could rely on while they waited for state and federal resources to arrive.

“We know the state and federal resources won’t touch a town for three to five days after a disaster,” he said. “When we arrived, there was nothing. Sometimes, smaller communities don’t get any resources or the attention that bigger cities do.”

Randazzo, who owns Rikenjaks and Panorama Music House in Lake Charles, knows all too well the devastation hurricanes can cause. Rikenjaks is up and running, while Panorama, located in Lake Charles’ downtown district, is undergoing major renovations after Hurricane Laura’s Category 4 winds caused the front of the building to collapse.

Randazzo also owns two restaurants in Southeast Texas — Madison’s in Beaumont, and a second Rikenjaks location in Vidor. Both businesses were impacted by Hurricane Harvey’s floodwaters in 2017.

Offering relief in the form of hot meals has been a longstanding effort that dates back to Hurricane Rita’s 2005 landfall, Randazzo said. The feeding is done out of Madison’s, open since 2004. Immediately after Hurricane Laura, roughly 30,000 meals were donated to local churches.

The recent effort to help Ida victims, however, was the first to be taken on the road. Because Randazzo didn’t have those resources to make it mobile, staff at Gator Country stepped in to help. He said Saurage understood logistics and provided the camper and cargo trailers. Randazzo had the food trailer and knew what it took to cook thousands of meals a day.

“We’re not trying to win any culinary awards; we’re trying to make meals that are filling, hearty and inexpensive with protein and carbs,” he said. “I think everyone understands the value of taking a deep breath, providing a hot meal and cold water, giving people a tap on the shoulder and saying, ‘It’s going to be OK.’ ”

Power was knocked out right after Ida’s landfall, meaning meals could not be frozen or refrigerated. Randazzo said fresh food was delivered by truck every morning through Madison’s food supplier.

In addition to the meals, a trailer filled with donations from individuals and businesses from Southeast Texas and Southwest Louisiana was brought to the church, Randazzo said. It included canned goods, diapers, baby formula and personal hygiene products. Another trailer loaded with supplies is set to arrive sometime this week, he said.

The operation wrapped up Saturday, Sept. 3, because some of the food supplier drivers based in Houston had tested positive for COVID-19.

Randazzo said he knows all too well just how devastating hurricanes have been throughout Southwest Louisiana and Southeast Texas. While he never had the chance to leave the church and survey Ida’s destruction, Gary and Sharon Saurage did, and they described the damage inflicted as terrible.

“When we are spared agony and sweat and the cost of major repairs to homes and business, we should take that time and give to those that have been affected,” he said.

Randazzo said residents in Southeast Louisiana, including the Cajun Navy, were instrumental in helping Southeast Texas in the days after Hurricane Harvey in 2017.

“It’s time for us to pay that debt back,” he said.

A mobile kitchen was left behind for Ida victims, who were also trained on how to use them, Randazzo said.

Randazzo said Panorama Music House should reopen in a couple of months.

“When we got in and looked, the damage was worse than we thought,” he said. “We’re reinforcing those old brick walls with steel. It’s going to be a nicer, safer, more efficient facility.”

The new Panorama will also include a new rooftop bar and private dining area, Randazzo said. He said he’s just as eager as the locals are to get the live music venue up and running again.

“Our focus is to give downtown the best venue they’ve ever seen,” he said.

Despite enduring multiple disasters, Randazzo hasn’t lost his focus. He’s in the process of building a third Rikenjaks in Lumberton.

“We don’t have a choice but to go forward,” he said.