Volunteer of the Week: Smith keeps pulse on community needs 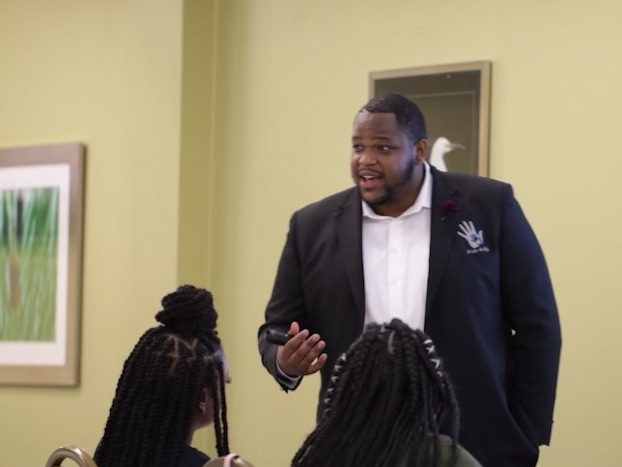 David Smith Jr., founder of Pick a Kid, said the organization has pivoted from strictly a school supply organization to providing more services for academic success. (Special to the American Press)

David Smith Jr., founder of the non-profit Pick a Kid, credits his parents, the late David Smith Sr. and Carol Smith, as his greatest inspiration and mentors towards public service. His father was a well-known, beloved minister and public servant in their hometown of Vinton, but Smith said it was his mother’s example that has shaped much of the work of Pick of Kid.

While his father was a more public face of ministry in the community, Smith said his mother was always “quietly in the shadows of ministry, ready, willing and able to serve.”

“My mom created one-

on-one relationships. She fed the elderly and widows from my earliest memories well into high school. She fed those same six to 10 people, though the list changed as different people died, but she was always up to something.”

Pick a Kid follows the same suit of Carol’s example by keeping a personal touch on community member’s needs, providing school supplies and academic supports to students and parents. “One thing that’s important to our mission is to have a true pulse of the community,” he said.

Social media has been one of the organization’s most powerful tools in understanding the true needs of the community. “If you use social media the right way, you can get a wellspring of knowledge of what people need.”

One of the greatest changes the organization has experienced through community connections is the need to pivot from a strictly school supply organization to providing more wrap-around services for academic success, Smith said.  With the global and local challenges everyone has experienced over the last two years, “we’ve moved into a space now where school supplies aren’t as immediate of a need as they once were. We left the tangible and started to offer them scholastic success opportunities through tutoring. We’ve had the opportunity to work virtually and create an online program for tutoring.”

Smith’s father often reminded him that the need to pivot and adapt to the community’s changing needs is a mark to be proud of, signifying a goal reached.

“At some point you don’t want to be doing the same ministry for 10-15 years, especially if it’s not serving the need,” Smith said. “I believe, and my dad would always say, that when we started the volunteer aspect of Pick A Kid that we were pioneers, because this wasn’t something that was happening so prevalent in the community. He liked to poke his chest out and brag about his son David ‘sparking a flame for community generosity.’ ”

While Pick a Kid started with school supplies and has morphed in to academic supports, Smith said it is truly limitless what the next phase of the non-profit will be. “That’s the thing that’s consistent among our team: We’re never too wise to take suggestions. We’re just really fortunate that the community trusts us enough to tell us what they need.”